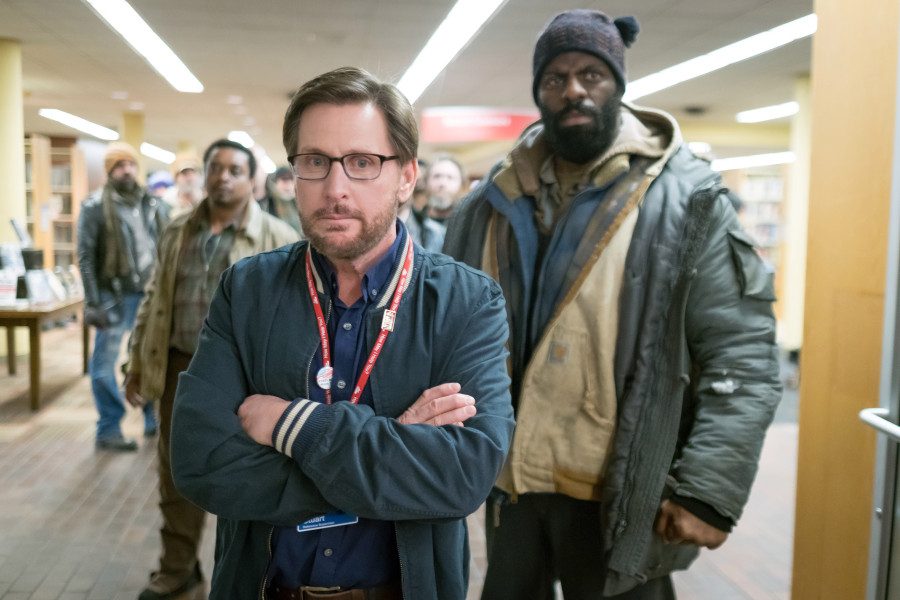 Review: Plot of ‘The Public’ eerily familiar for Cincinnati

“The Public” is a fictional interpretation of current issues haunting Cincinnati. It manages to touch on the opioid epidemic, inefficient public transportation, police brutality and homelessness all in a little over two hours.

The film was primarily shot in the the main branch of the Public Library of Cincinnati and Hamilton County, with other shots and verbal references that local moviegoers should catch onto, such as characters making plans to go out to eat in OTR, and library’s manager living across the hall from a UC professor.

In the film, the city experienced a brutal arctic blast that took the lives of more than half a dozen homeless individuals who were forced to sleep on the streets because of overcrowding in shelters.

Many of these people seek warmth and community at the public library, where a crowd of them are standing at the door right at open and exiting right at close.

After repetitive coverage of deaths due to exposure, the people banded together to occupy the library after close by collectively participating in a sit-in. The idea was to force the city to declare the library an emergency shelter in response to the brutal temperatures.

Despite the peaceful nature of the demonstration, local officials and media use this as an opportunity to dramatize the event and demonize the people involved. The city’s prosecutor, who happens to also be running for mayor on a “tough on crime” platform, goes on live television to say that it is a hostage situation and that the library manager is armed.

This is one of those movies that doesn’t have a happy ending. While there is comic relief throughout the film, the issues that are addressed are very real and emotional.

In the same year that the movie was being filmed (2017), Ken Martin, a man that experienced homelessness, froze to death at a bus stop downtown, as reported by WCPO Cincinnati.

In this same year, local activist organizations worked together to form the “Our Library, Our Decision Coalition” that aimed to stop the sale of a portion of the library to a private entity, 3CDC.

It was only two months ago when another man experiencing homelessness, Danny Lee Miles, died on the streets of OTR. That night temperatures dropped just under 20 degrees Fahrenheit, according to Cincinnati.com.

The chilling familiarity of the film’s reality in this city sparks an intense emotional response.

However, moviegoers were not teary-eyed through the entirety of the showing. There were moments when the theater erupted in laughter, such as when Estevez’s character, Stuart Goodson, acted out of his shy librarian character to crack jokes at local authorities during negotiations.

There were many times that the audience broke into an applause, most notably when Wright’s character, Mr. Anderson, who appeared to cooperate with the local authorities in the beginning, looked at two law enforcement officers and said, “I’ll be damned if I let you thugs turn (this library) into a battlefield,” and walked off to join the protestors.

The film’s conclusion was met with thunderous applause from all audience members.

This film is an excellent medium for starting a conversation about homelessness, rent control and poverty not only in Cincinnati, but in every city across the country.