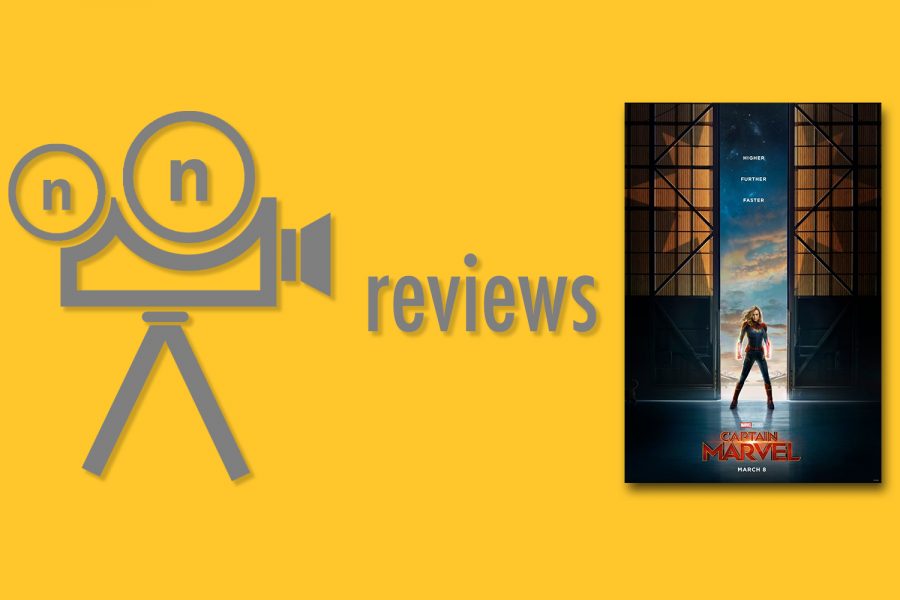 Brie Larson has the ‘Right Stuff’ in ‘Captain Marvel’

Marvel’s first female-led feature is undoubtedly a giant leap forward for representation for women in the mega-franchises that have dominated the box office the past decade, but a small step toward bringing anything new or exciting to the superhero genre.

In “Captain Marvel,” the 21st installment in the Marvel Cinematic Universe (MCU), we are finally introduced to Carol Danvers/Captain Marvel (Brie Larson). After being hinted to in a post-credits scene in last year’s box office record breaking “Avengers: Infinity War,” our introduction to Danvers comes at last—but at a cost.

“Captain Marvel” is used to bridge the gap between the post-credits scene in “Infinity War” and the upcoming conclusion in this summer’s “Avengers: Endgame” instead of giving Danvers the origin story she deserves. Despite this shortcoming, Larson steals the show as Danvers and creates a character that integrates so seamlessly into the MCU, it feels as if she should’ve been there from the start.

The Kree, an alien race introduced in previous MCU film “Guardians of the Galaxy,” are on full display here. In the beginning of the film, we meet Yon-Rogg (Jude Law) and his squad of Kree “Noble Warrior Heroes”—one of those being Danvers. We also get a glimpse of the camaraderie Danvers shares with her crew, and a look at Hala, the Kree capital. We never see the Kree homeworld again, but we are treated to a look inside Rogg and Danvers’ relationship.

The relationship between Rogg and Danvers is used to create and reiterate the message that women have heard for generations: they are too emotional to lead. Rogg believes that if Danvers doesn’t learn how to control her emotions, she will never be able to use the full extent of her power.

After spending time with the Kree, we are introduced to their worst enemy—the Skrull. During a mission to rescue a Kree operative, Danvers is captured by Skrull forces and placed inside a device that reads her memories. Here we see a lazy attempt at an origin story for Danvers that initially comes off more as an afterthought than a legitimate plot device. It isn’t until the film’s climax that these memories are used to answer the question we’ve had throughout— just who exactly is Carol Danvers?

Danvers eventually escapes the Skrull and crashes onto Planet C-53, otherwise known as Earth. After her arrival, Danvers finds herself in what she believes to be a primitive culture— Los Angeles in the year 1995. Here, as we’re reminded of renting VHS tapes at Blockbuster and what phone booths are, the film begins to pick up the pace while introducing us to familiar faces.

S.H.I.E.L.D. Agents Nick Fury (Samuel L. Jackson) and Phil Coulson (Clark Gregg) make their return, albeit much younger than we’re used to seeing them—thanks to both being digitally “de-aged” 25 years. The CGI used for Jackson is especially impressive. Jackson looks as if he walked off the set of “Pulp Fiction” and started shooting for “Captain Marvel.”

Along with the de-aging tech used, the tastefully done ‘90s references  help cement the film in the time period. Instead of being lambasted with references to the most absurd the decade had to offer, viewers get to re-experience copying files from a CD-ROM on Windows 95, being disconnected on long-distance calls and what it looked like tying a flannel around your waist. Songs from Nirvana, No Doubt and R.E.M. integrate perfectly into the film and immerse viewers in the era of when Alta-Vista was the premier search engine.

Danvers, a former USAF test pilot, finds herself amongst set pieces familiar to anyone who’s seen “The Right Stuff.” We’re treated to a desert bar with photos of aircraft and space planes adorning the walls, along with g-force inducing dogfight scenes plucked straight out of “Top Gun.”

Despite a star-studded cast, wonderfully choreographed dogfights and the dream of the ‘90s, Larson steals the show with humor and wit; she easily cements Danvers as one of the most exciting MCU characters. Larson brings Carol Danvers to life for an entire generation of fans that grew up reading the comics and for millions of women who have longed to see themselves represented on screen in the form of a strong heroine.

“Who is Carol Danvers?” That’s the question Captain Marvel spends its 124-minute runtime attempting to answer. In the film’s final fight, she addresses the antagonist by telling him “I have nothing to prove to you,” and the answer is revealed; Carol Danvers is someone who has been falling down and getting back up again in the face of men her entire life.

“Captain Marvel”, the 21st installment in the now 11-year-old MCU, hits all the same beats as Marvel’s previous franchise entries. Even Larson’s phenomenal performance can’t save this film from feeling like just another origin story. For fans of previous Marvel films who don’t mind the familiarity, Captain Marvel is a delight. Moviegoers expecting a new take on the genre, however, will leave the theater disappointed. If only Marvel could’ve used that de-aging tech to breathe new life into a film that feels too much like the origin stories we’ve come to expect from the genre.