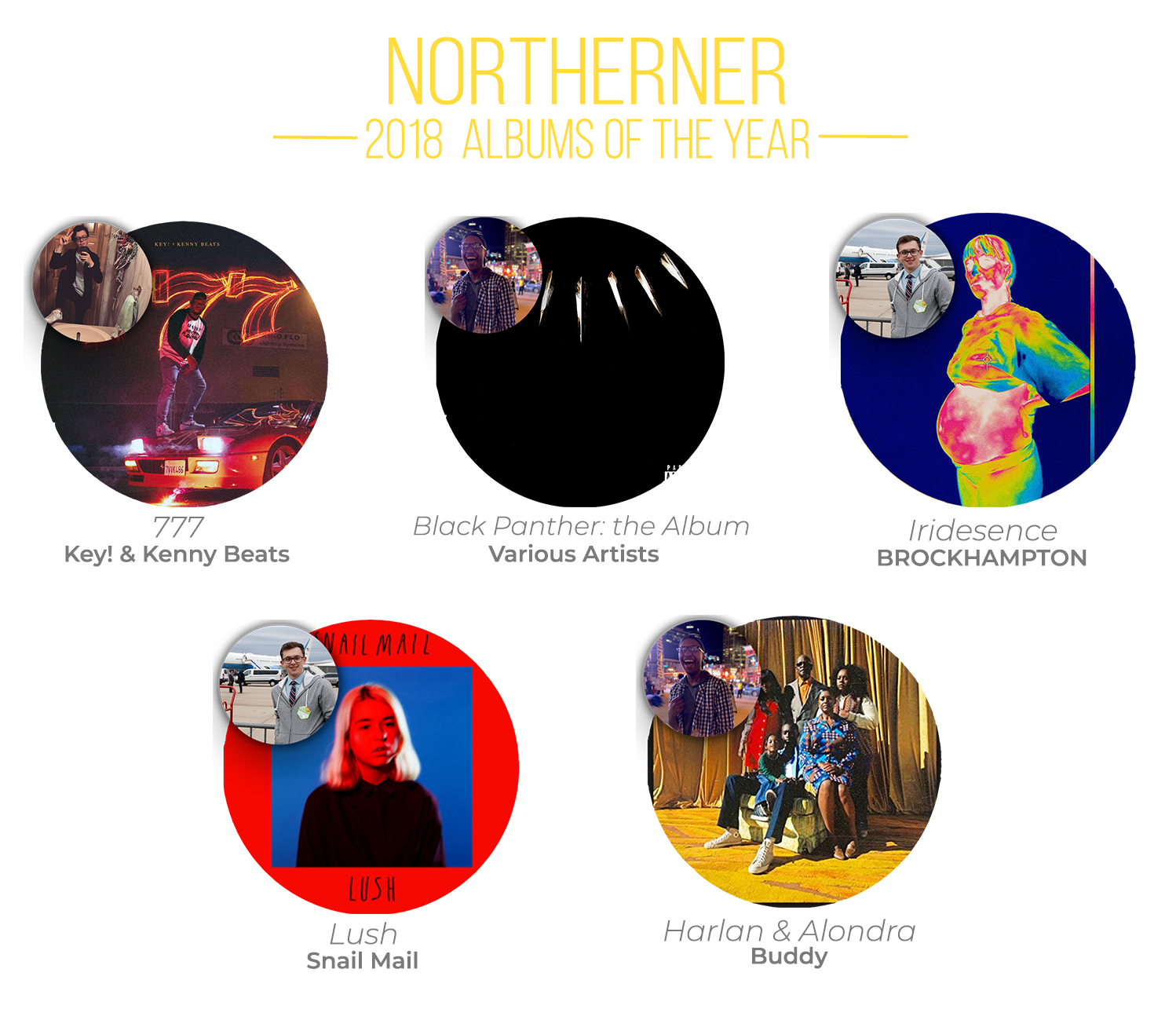 Editor’s picks: Our favorite albums of 2018

We danced, we sang, we flossed sometimes a little too hard. Here's the albums that inspired those moments.

The Black Panther album, released in February alongside the record-shattering movie, created anthems for the summer, Instagram captions and more, and the entire project was overseen by none other than Kendrick Lamar.

In the 14-song album, you are invited into the contrasting worlds of Marvel superhero T’Challa and his arch-nemesis Erik Killmonger. One world is Oakland, California and the other the fictional African country Wakanda; the album brings together the two seamlessly. Lamar unites 27 artists of different musical backgrounds to form this jam-packed album.

Each artist brings out a different part of the two characters’ personalities. All the while, African instruments and chants can be heard in the background and make up a majority of the beats. The production challenges trap beats, yet still proves versatile enough to compete against R&B sounds in the same gesture.

Tracks two and three use the same rhythm in varying ways. “X” by Schoolboy Q, 2 Chainz and Saudi is a rap song with the most elaborate and best beat on the album, while Khalid and Swae Lee’s pairing on “The Ways” flows almost as smooth as Okoye telling her husband she’d kill him for Wakanda.

The lyrics switch from English to Zulu, an African language native to Southern Africa, in a few of the albums songs. “Seasons” includes a beautiful verse in Zulu giving a message to the people of Southern Africa. The intention was to create a bond between non-African people and African people; instead of giving them a song in a language they can’t understand, Sjava gives them a verse that’s meant for them.

As a journalist (myself) once tweeted, the album “makes your melanin happy” upon one listen. With its unbearing reminder of T’Challa’s life and Future adding his two cents to “Slob on My Knob” there’s plenty to be proud of.

Atlanta rapper Key!—who is either completely or not at all responsible for the current sound of rap, depending on who you talk to—is someone whose music I had stopped checking for a long time ago. So when my friend and former Northerner Arts & Life Editor Jude Noel texted me one morning in May, saying “you gotta check out this new key project!”, I shrugged it off. It’s Key, I thought. I’m sure it’s decent; I’m just not really that interested. I’ll get around to it. But 777 is more than decent; it’s filled with amazing production, catchy hooks and emotional depth.

For an artist who’s been on the scene for more than a decade now, Key! isn’t as prominent as you’d think he would be. Even a feature on “U Guessed It,” the OG Maco song that launched a thousand Vine parodies, a prominent verse on Father’s 2014 viral hit song “Look At Wrist,” and his help in making artists such as 21 Savage, Playboi Carti and Post Malone rise to fame haven’t done much for his popularity. Key! doesn’t seem to mind though. “Thank you for ignoring me,” he says on album standout “Love on Ice.” “I don’t wanna be famous.”

Key’s unorthodox delivery and voice modulation has long been copied by artists all across the genre, but on 777 he shows that the imitation can’t match the original. His punchline-driven style has never been better, with references ranging from country singers to anime to Star Wars to Legally Blonde. Every replay of 777 reveals a joke or a callback to popular culture that you didn’t pick up on before, hiding in the background waiting to be discovered. A lot of the metaphors present on the album are so absurd you wonder how they were even conceived, like when Key! raps about his broken heart of ice and somehow works in a way to mention Olympic figure skater Kristi Yamaguchi in his rhymes.

The ticking heart of 777 is the excellent production work by Kenny Beats, who’s been on a tear this year after going from a virtually unknown producer to crafting some of the biggest rap hits of 2018. His pitched-up drums and warbly, complex synths are the perfect compliment to Key’s booming vocals. Every instrumental on the album feels just the right amount of crazy – complex enough to be like nothing you’ve heard before, yet simple and catchy enough that listeners will be replaying the beats in their mind all day.

Despite the in-your-face production and boisterous raps, Key! isn’t afraid to bare his soul on this project. Heartbreak, fractured relationships, and love are themes throughout the album’s snappy 35-minute runtime. One track has Key! reflecting on how his kids look just like him, while the haunting and ominous “Control” has him painfully yelling “You’ve been through so much, I know that love is hard to find” and “I’m trying to chase vanity, I’ve lost all control / I hear that all the time, I don’t wanna hear it no more.”

Key! is at his best here, delivering insanely clever bars and earworm melodies over incredible production, and the short runtime makes it easy to run the entire project back over and over.  777 asks listeners a very simple question – “can ya dig it?”

Right out of high school, Lindsey Jordan has found a way to cleverly muse about the state of the world and the state of a teenage heart on Lush. Her debut as Snail Mail is notable for a few reasons, mostly that it’s a moody but never bratty reflection of modern romance, and it’s a kick of ‘90s nostalgia that feels brand new all at once.

“Stick” swirls in a reflective indie waltz. “Do you dream about people that wrong you, do you see those faces again and again,” Jordan croons as the ballad crescendos to a verbed-out guitar chorus. It’s a cross between the yearning pleas of The Cranberries and the decadence that makes Band of Horses songs so syrupy sweet. Jordan finds the balance that’s both in line with the indie music of 2018 but also timeless.

But it’s “Speaking Terms” on the A side of the LP that got me through my breakup. “Say what you gotta, sleep in somehow / Leave things on speaking terms, and I’ll see you around.” On the track, Jordan proves she’s the mistress of the minor chord with some rock swagger, but her voice drips with a pained, trembling quality over a churning guitar crunch. Break up with someone, listen to this record, drink some red wine and you’ll hear what I’m talking about. Pain is so 2017. Jordan knows it, and she’s made it all into something new.

There has always been a madcap appeal to the world’s weirdest boy band, BROCKHAMPTON. Since emerging in 2015, possibly from a puddle of blue paint, their aim has been to reclaim the term “boy band” as a clan of rappers, vocalists, guitarists, designers and wannabe drug lords that sport bulletproof vests at shows. Their brand is being loud as hell and throwing everything but the kitchen sink into their beats, lyrics and style. It’s evident in the group’s 2017 triptych SATURATION, which bore subversive should-be hits across its albums like the chock-full-o-name-drops “STAR,” the sunny roll call “GUMMY” and (my personal favorite) the frantic sax freakout “BOOGIE.”

Their 2018 LP “iridescence” doesn’t flip the script, and they continue to lay bedrock beats resembling anxiety attacks to support dialed-up MC bravado. Opener “NEW ORLEANS” offers a rap round-robin over a grating drone, and similarly “J’OUVERT” prowls with pumped-up synth and rhymes that seem to crack under their own weight. “DISTRICT” is another crowded and buzzing wall of sound. But it’s on tracks like “SAN MARCO” and “TONYA” that show the band’s restrained pop and R&B sensibility. As you’d expect with a 15-track entry that clocks in at 48 minutes, “iridescence” feels jam-packed.

Fans might dismiss the album as the most palatable entry in BROCKHAMPTON’s catalog, but the boys take some risks and refine their voice. It’s evident on those less chaotic tracks like “TONYA” with piano that walks along chords over Ciaran Ruaridh McDonald’s soaring falsetto and frontman Kevin Abstract’s storytelling. The album’s accessibility shouldn’t be held against it, especially since the most inviting aspect of BROCKHAMPTON has always been its collaborative vibe. The music can be alienating, crass and even harsh, but it’s not hard to imagine yourself donning the blue paint and stepping to the mic yourself.

Compton, California is home to rap legends and hip hop trailblazers. If you go to the intersection of Harlan Avenue & Alondra Boulevard, you’ll find freshman rapper Buddy’s home, and the title for his breakthrough album.

Harlan & Alondra pin drops you into the mind of the Compton rapper. The album showcases the variety of emotions and mental states—each attached to a different music style—that a person experiences on their transition to adulthood and gives the listener a comforting reminder that they too have grown from their roots and continue to grow.

This album, at its core, is a coming-of-age film brought to the hip hop scene.

Buddy begins ushering you with “la da das,” lamenting the struggles of having fake friends, writing music and spending money when rent is due in a few days. Before you are four minutes into the album, his world starts to unravel before you. On the second track, he instead flips the narrative saying how proud he is of these struggles and is ultimately “Shameless” of his situation and happy in the moment.

Where Buddy begins to excel is his sound-switching. Accompanied by established artists like A$AP Ferg, Ty Dolla $ign, Snoop Dogg and Khalid, he matches each artist’s style with ease. His song “Black” with A$AP Ferg brings you back to Ferg’s Trap Lord album; while his collaboration with Snoop Dogg on “The Blue” incorporates the talkbox and flashes you to the ‘90s funk wave that brought Zapp and Roger’s “I Want to Be Your Man.”

Buddy begins to flex his own talent with his solo tracks and shows that when he is alone, he still can shift the sound with no difficulty. “Find Me 2” is almost a conversation Buddy has with himself telling himself he’s proud of how far he’s come, yet the chorus sings the song that I’m sure everyone has felt at some point, “I can’t see myself.”

“Trouble on Central” gives the feeling of strolling through campus on your Tuesday after a stressful day of classes. “Hey Up There” with Ty Dolla $ign flashes you to the late night car ride when you think about how you’re still in this stage of stuck-ness and moving toward your dream.

Buddy simply daps you up, tells you “I’m working toward my dreams, and you can too.”