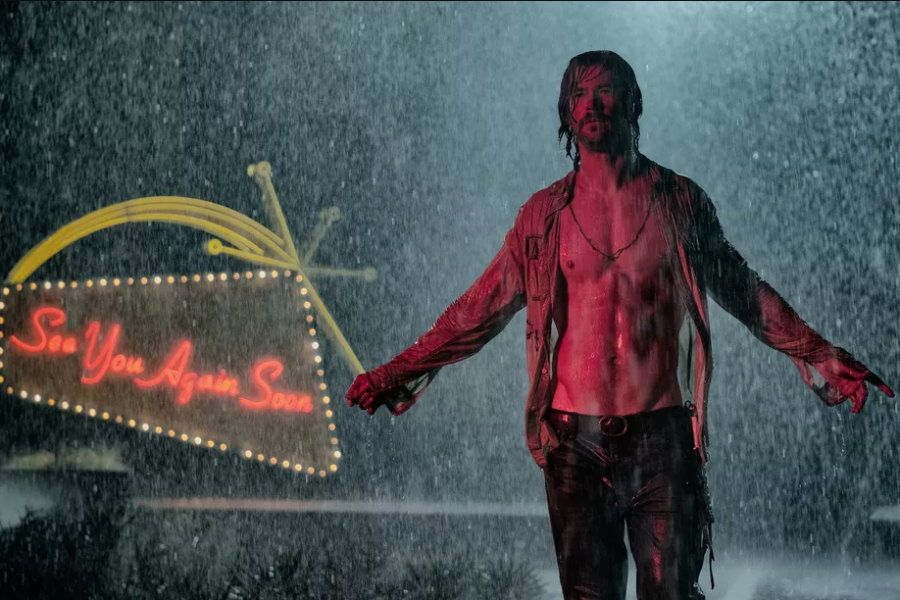 Chris Hemsworth in “Bad Times at the El Royale.”

A priest, a salesman, a hippie and a soul singer walk into a motel lobby.

This might sound like the beginning of a corny joke, but it’s actually the beginning of Drew Goddard’s sizzling new neo-noir thriller “Bad Times at the El Royale” – a pulpy B-movie filled to the brim with A-list talent.

The film is set in a run-down motel known as the El Royale, which straddles the state line between California and Nevada. Once a glamorous getaway for celebrities like Marilyn Monroe and Frank Sinatra, the motel is now a ghost town with several mysteries to be explored. On one night in 1969, seven strangers converge at the El Royale, each with a dark secret to hide.

The movie’s cast is as star-studded as they come. Jon Hamm (“Mad Men”, “Black Mirror”) stars as an obnoxious vacuum cleaner salesman, Jeff Bridges (“The Big Lebowski”, “True Grit”) plays an aging priest with Alzheimer’s disease, and Dakota Johnson (“Fifty Shades of Grey”) plays a rebellious Alabama hippie. The rest of the cast is best left a secret, as “Bad Times” has several unexpected cameos throughout. To spoil the cast would spoil the fun.

“Bad Times” is the definition of a slow burn–in fact, the first 25 minutes almost feel like a stage play, as there is one long scene showing each character talking amongst themselves while waiting for the motel’s concierge. However, this long build-up works in the film’s favor; when the plot gets going and the bodies start falling, every action-filled moment feels necessary.

Writer/director Drew Goddard, who previously turned the horror genre on its head with his directing debut “The Cabin in the Woods”, does a wonderful job here, as the visuals on display here are breathtaking. The film also boasts a standout soundtrack full of late-60’s hits, including music from the Isley Brothers, The Box Tops, and Deep Purple.

Perhaps the most unexpected aspect of “Bad Times” is the outstanding performance from Cynthia Erivo. She plays a singer who gets stuck in the wrong place at the wrong time when she witnesses one of the motel’s guests being murdered. One of the movie’s pivotal scenes features Erivo’s character practicing a song while unaware of the chaos taking place in the room next to hers, and her live vocals–coupled with her acting performance during the events that follow–are genuinely bone-chilling. Despite this being her film debut, Erivo steals every scene she’s in; don’t be surprised if this role turns her into a bonafide Hollywood star.

Unfortunately, “Bad Times” struggles throughout with inconsistent pacing. The film is split into chapters centering on each character, with flashbacks recounting what led to their arrival at the El Royale. Frustratingly, several action scenes and big plot twists are interrupted by these flashbacks. With a whopping two-hour and 22-minute runtime, many of the longer scenes seem as if they should’ve been left on the cutting room floor in an effort to speed things along.

Another potential issue with “Bad Times” is how similar it is to other famous media. Television fans will note that Jon Hamm also played a sleazy salesman with many secrets in AMC’s classic drama “Mad Men”. The film is also quite similar–both in the way characters are developed and in the non-linear narrative style–to Quentin Tarantino’s “Pulp Fiction” and “Four Rooms”. This isn’t exactly a problem, as “Bad Times” certainly does enough to distinguish itself from those works, but the movie’s influences may be difficult to ignore for some.

Overall, “Bad Times at the El Royale” is delightful. Not everything works, and the runtime could have been shorter, but nearly every actor is fantastic and the cinematography is stunning. Viewers searching for something with lots of action should seek elsewhere, but if you love a good mystery, it’s worth checking in.