I talked to an old high school teacher of mine not long ago, and something he said struck me like nothing had before. 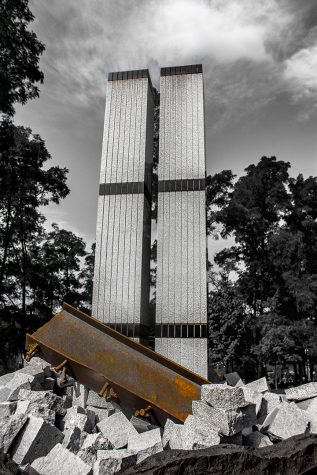 Owen Treolo
The 9/11 memorial at Cresent Spings Community Park features an actual I-beam from the wreckage of the World Trade Center.

Sept. 11, 2001 was a Tuesday. The skies were clear, not a cloud in the sky over New York City. A perfect blanket of blue covered the sky for miles. People commuted to work and school, taking taxis, hopping on the subway or just walking to their offices.

At 8:46 a.m., everything stopped resembling a normal day. The city of New York, Washington, D.C., America and the rest of the world changed in an instant.

I was only six years old and sitting in my first-grade classroom. The classroom intercom came on and we heard the familiar voice of our school secretary start to call my classmates down to the office for an early dismissal. None of us knew why. Not long after, I was called down and greeted by my mother.

I remember asking her why I was going home so early. “I’ll explain when we get home,” she said, a bit uneasy.

We got home, and she turned on our little kitchen TV to one of the major news networks. All I remember seeing was a set of giant buildings. One had a massive hole punched into the side, and it was burning. The words my mom said to me will live in my mind forever: “Look what happened.”

Moments later, a Boeing 767 came in low and smashed into the other tower. I watched, not really knowing what was happening, then went off to play without giving it much thought.

That’s all I remember from that day.

For millions of Americans, the words “September 11” echo with images of fire and destruction. Visions of a country gutted to its very core flood their minds as they recall that fateful day.

That’s what my high school teacher was trying to tell me: high schoolers today don’t remember 9/11 as an event they experienced. To them, my experience is just history.

If you ask anybody, they can tell you where they were and what they were doing when they heard about the attacks.

About a month later on Oct. 7, 2001, my parents and I sat in our living room watching the news. That night, the United States military launched a bombing campaign on Afghanistan. It was like watching the night sky explode like a firework display on the Fourth of July.

I had family who eventually got deployed, so the image hits close to home.

In March 2002, a documentary simply titled “9/11” premiered on CBS, filmed by two French brothers, Jules and Gedeon Naudet. What made this documentary unique was the fact that the men who filmed it captured footage inside the towers as the event unfolded. It followed New York Fire Department squads as they set foot in the buildings. According to TV Tango, the film was watched that night by nearly 40 million people, including me and my parents.

I have a habit of watching that film every year on the anniversary of the attack. It’s a somber experience re-watching these events, knowing so many people died.

As a 6-year-old, I didn’t really understand what was going on. My parents tried to explain to me that America has enemies, that people didn’t like us and we had to go and fight them because of it. Bits made sense, but I never really grasped the full significance of it until a few years later.

Now I’m 23, and able to understand the history and story behind the attacks and why we went to war because of it.

This year, high school freshmen will be taught a piece of history that happened nearly a year and a half before they were born. This is something I experienced along with millions of others. I have a story to tell about that day like everyone else old enough to remember. I experienced not just an event that changed the country, but the world.