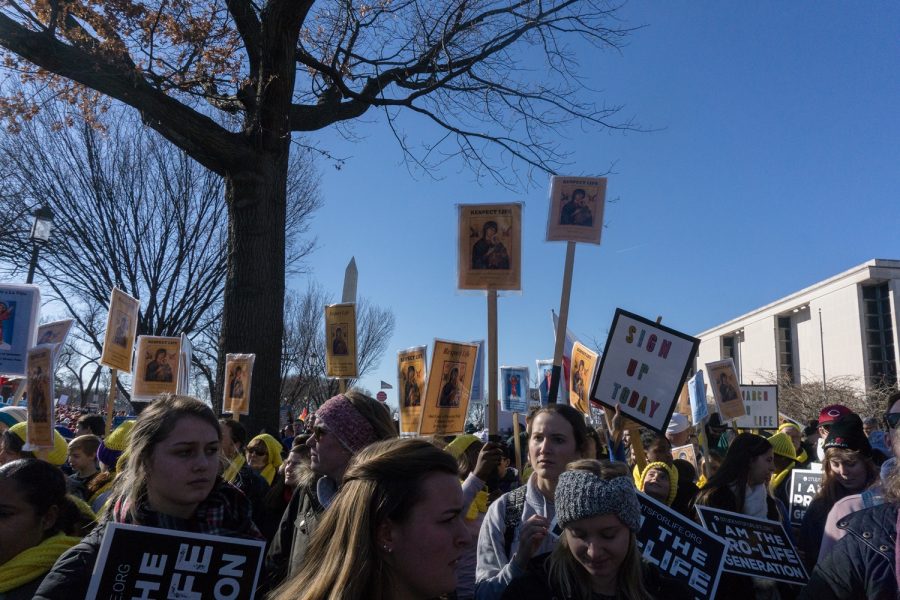 Attendees took to the streets of Washington Jan. 19 to participate in the 45th annual March for Life.

The immense crowd slowly takes shape in the streets. Signs and flags from groups all over the nation wave high above us. Cheers, prayers and songs fill the air around us as we start our journey to the Supreme Court building, where in 1973 the world was changed. My feet are already aching as we walk and wait for the crowd to continue moving. I’m running on two hours of sleep on a cramped charter bus. My shoulders are sore and I haven’t eaten since 8:15 that morning. All of this, and there’s still no place I would rather be than among the hundreds of thousands in D.C. on Jan. 19.

The 44th annual March For Life took place last weekend, and fortunately I was able to be there for the second year in a row. The theme this year was “Love Saves Lives.” A rally before the march included several speakers who shared the many ways that love had impacted their lives; some through the support of a stranger amidst an uncertain pregnancy, some through adoption and others through miraculous medical procedures. Before we began, Jeanne Mancini, the president of the March, asked us to post any pictures from that day with the hashtag #WhyWeMarch, and share our personal motivations for marching. The longer I thought about it, the more I wondered: why exactly do I march?

I march because as I’ve gotten older I come to realize how much I treasure life and the heavy implications that can come when we forget that. It is true, life begins in the womb, the core belief that binds all marchers together, but life also includes all the moments that follow after we are born.

I march because I believe we have forgotten the true worth and sanctity of life. I march for the people, including myself, who have once been pushed to believe that their lives were meaningless, who were shrouded in the darkness of mental illness enough to believe that no one would care, that they were worthless. I march because I want them to know that there are people willing to reach out, love, and show them how worthy they are of the days ahead. I march because I want all women, pregnant or not, those who have chosen abortion or chosen life, to be treated with compassion and shown hope for the future. I march because I have lost loved ones, and through those losses realized the incredible lengths that someone’s life stretches and the pain that follows when they are gone. We are not only a body or a mass of cells; we are sons and daughters, brothers and sisters, cousins, nieces and nephews and friends. A person’s life is so much more than just their own, when we look at how many people they touch over time.

I march because of the teenager who spoke at a retreat I attended, telling us how her family came to adopt her cousin. Her cousin was supposed to be aborted, but the clinic was closed every time her mother tried to go. She talked about how grateful she was to have her, and the joy she brought her family. I march because of young couples who suffer from miscarriages, only to open their hearts to adoption. I march because of the beauty created when families welcome children into their home. I march because I believe every person should have the opportunity to enter the world. It isn’t a perfect world, but abortion takes away any chance for someone to find their happiness and purpose within it.

I march because I believe every person, of every race, religion, gender and sexual orientation, born and unborn, is immensely valuable and deserves to be treated with dignity for simply being created. We should have the opportunity to grow in a world where our individual worth is recognized and nurtured. There is a lot of work to do in this endeavor, but we must begin our work in the womb.

To ensure each living person’s fair quality of life, we must fight for life at the moment it begins: conception.