McKenzie Eskridge navigates a classroom exploring '90s-era Riot Grrrl punk, waxing her own sentiments on what feminism means in the modern-era. 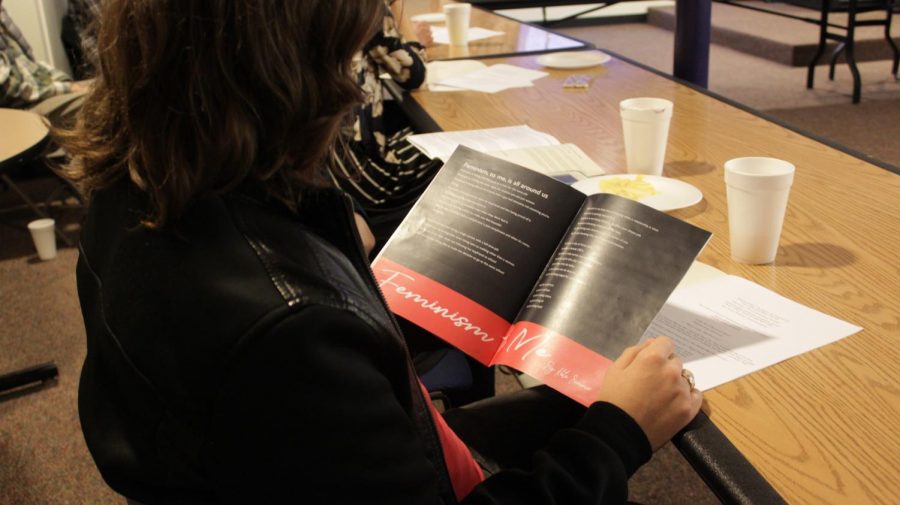 An honors class that focused on feminist punk rock met to give their final presentations after a semester of musing about feminism is, through the lens of punk rock movements.

Dr. Diana Belland’s “Feminist Punk Rock” class presented their final projects in the basement of the Honor’s House the last week of fall semester. Centered around the “Riot Grrrl” movement that emerged in the Pacific Northwest and Washington, D.C. in the late 1980s and early 90s, the course “used a cultural studies approach to explore music, art, criticism, and social activism of contemporary feminist punk rock music within the historical context of feminist protest music.”

Cassie Rinehard, a sophomore English major, tapped into the Riot Grrrl spirit by crafting a zine, a DIY publication that expressed personal and political ideas outside of the mainstream. Short for magazine, they were staples of the movement and of the time.

Rinehard shared that even though the internet is a powerful tool for organization, she has a special appreciation for wholesome, grassroots-type activism like zines and would like to see its revival.

Kate Sommer, a junior visual communication design major, also created a zine entitled “Feminism to Us.” Sommer ran with this project “in an attempt to understand and document how people of different backgrounds view and embrace feminism.”

Alour Nyamor, a computer information technology junior, emceed the event and brought down the house with a live performance of his self-composed song, “Good Ones.” The lyrics reflected praise during his lifetime for being a “good” black male and “the false sense of entitlement that leads to one’s own destruction at the hands of the powerful majority, who truly see you all as the same.”

Other projects included Robert Jensen’s stereotype-defying rendition of Gloria Gaynor’s “I Will Survive,” Ifeelouwa Babarinde’s examination of feminism in her home country of Nigeria, and Kira Turner’s defense of conservative feminism in her music video, “Feminism the Right Way.”

Kendra Herweck, a junior physics major and member of the rock-acoustic band, Pussy X3 (pronounced Pussy, Pussy, Pussy), was already interested in feminist ideas and punk rock before the class, but about half the students came in with no prior knowledge. This did not disrupt classroom dynamics whatsoever.

Because the environment was comfortable, conversations were real from the start. So real that junior jazz studies and creative writing major Natalie Brady has decided to submit a grant proposal to bring guest speakers in for a seminar series on sexual assault and related feminist issues.

Now feels like a good time to clarify what kinds of topics fall under “related feminist issues.”

Feminist issues are not just the efforts of womankind to earn equal pay or put an end to sexual harassment in the corporate world. It puts value on domestic contributions and challenges racial oppression. It calls out the toxic effects of stereotypical masculinity and defends the earth’s natural resources. It normalizes the non-binary idea of genders and fluid sexuality as well as accommodates the needs of differently-abled people. It stands in solidarity with religious minorities.

If this is your first time pondering the intricacies of feminism, welcome. If you’re still reading, you are part of the solution.

Intersectional feminism recognizes the different experiences that stem from multiple forms of oppression. A Native American woman’s struggle does not mirror an Asian woman’s. The public treats white sexual assault survivors differently from women of color who come forward. Intersectional feminism attempts to understand the reality of each others’ struggles so that no one is left behind.It’s all about equity.

While the Riot Grrrl era materialized in a place of white privilege, it carved out a space for discussion about sexual orientations. According to Herweck and Rinehard, some zines were entirely dedicated to LGBTQ issues. This lent itself to critical discussions in NKU’s classroom.

Identifying instances where we feel we’ve been shortchanged because of something beyond our control is relatively easy. Getting introduced to our invisible privileges and blind spots is uncomfortable.

This is why Brady’s seminar proposal is so important. NKU community members at every level of authority stand to benefit from projects like these.

Silence kills, but the spirit of feminist punk rock still lives in music, marches, and other actions against social injustice.

HNR 303: Feminist Punk Rock embodies the core values of education in a true democracy. We must study the world around us with critical eyes, open discussions, and creative solutions to pressing issues.

The university is more than a resume-builder; it is the backbone of innovations that raise the minimum standard of living. If this type of learning environment does not resemble your college experience, question why.

In the meantime, give feminist punk rock bands like Bikini Kill, Sleater-Kinney, Heavens to Betsy, and Bratmobile a listen.