Finding the story: A reflection on my heroin series 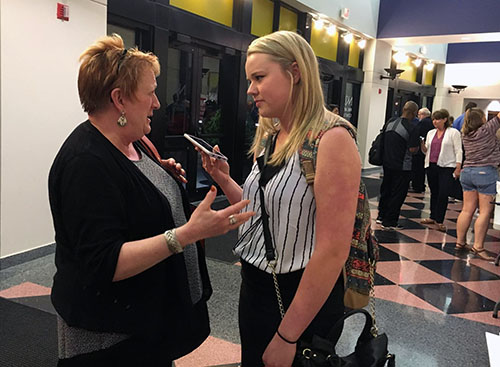 Provost Sue Ott Rowlands was a major influence in writing the series on heroin addiction, as she coordinated author Sam Quinones’ visit to campus in April.

I sat in a small office across from Dr. Perilou Goddard, a psychology professor who specializes in drug policy. Eyes locked and ears attentive, I listened as she discussed some of the common misconceptions society has about heroin and those who are addicted to the drug.

She must have read the interest in my eyes. She produced a small, blue pouch from her desk and pulled the zipper open, revealing a syringe-like apparatus and two long, orange cartons containing the antidote. For the first time, I was introduced to naloxone.

Goddard explained how the drug reverses heroin overdose, bringing the individual who has overdosed back to life with a simple spray in each nostril. Naloxone seemed like a miracle to me if I have ever heard of one.

I didn’t know it at the time, but that afternoon in her small office, surrounded by books related to addiction, NKY Hates Heroin pamphlets and the contents of a naloxone kit, my love for heroin reporting was born.

What she told me next made my heart race and my body stiffen, the way I get when I know I’ve found a good story.

She told me that she knows a student who teaches agencies, moms and dads, nurses and law enforcement officials how to identify an overdose and administer the life-saving drug.

A few weeks later I met the student Dr. Goddard had mentioned that day.

As long as I live, I will never forget the day I met Jason Merrick.

I sat across from him at his desk in his office at the Kenton County Detention Center, where he runs a drug and alcohol treatment program for inmates.

The 44-year-old NKU student detailed his extensive history with drug use, and how he ingested drugs from marijuana, to meth, to heroin since he was 13-years-old.

He was so sick with addiction at a point in his life that he left his home and lived in a treehouse with nothing but a 20-gauge shotgun and doses of crystal meth.

He stayed there for months, drinking and using crystal meth daily. He was sick from drug-induced malnutrition and sleep deprivation. He spent his days hearing helicopters whip through the wind. He was terrified of the lizard-like creatures that he saw crawling in the trees.

Throughout the two-hour interview, I choked back tears as he sprinkled every intimate detail of his life into my hands.

The product of meeting Jason was “Addiction to Advocacy,” a profile piece recounting his struggle with addiction, his path to recovery and the impact he has had on the Northern Kentucky community.

But Jason may never realize the impact he had on me.

I felt an enormous amount of pressure to convey Jason’s story in a way that might change another’s perspective the way he had changed mine.

Meeting Jason and telling his story inspired me to devote a semester to reporting on heroin and addiction.

Now, a semester and nine stories later, Listening, Learning, Leading: A series on NKU’s role in the heroin epidemic contains the most meaningful pieces I have ever had the privilege to write.

While writing the series, I met Kristie Blanchet, a friend of Jason who also advocates for the use of naloxone.

Kristie told me about the pain and suffering she experienced while caring for a family member who was addicted to heroin. When she tried to find a treatment facility for her loved one, she hit nothing but dead ends.

At that point in her life, she decided to pursue a degree in social work at NKU to assist those struggling with addiction in laying out a path to recovery.

The passion that I saw in Kristie is something that I cannot put into words. She exudes love for the advocacy work that she does, and she promotes understanding in a way that cripples the isolation faced by those who are addicted to heroin.

I continued the series by writing about the potential of our campus police department carrying naloxone, the controversy surrounding needle exchange programs and student research examining drug prevalence on campus.

This project has taught me so much about heroin and addiction all while helping me grow as a journalist — and a person.

The most powerful stories I have ever created are a part of this series. These stories were some of the most difficult pieces I have ever had to write because they were so real. People shared the darkest and most intimate details of their lives with me. I learned to listen with compassion and empathy, and I learned to write their stories in a way that was careful and accurate.

I hope this package promotes empathy and understanding for those who use heroin. I hope that those who read these stories experience just a fraction of the compassion that I felt. I hope these stories change the way someone thinks about heroin addiction… even if only for a moment.

Thank you to everyone that I have met throughout the course of this project, especially Dr. Goddard, Jason Merrick and Kristie Blanchet. Without your insight and experiences this series would not have been possible. Thank you for trusting me to tell your story, and thank you for touching my life in a way that has made me a better journalist and a better person.  -AA