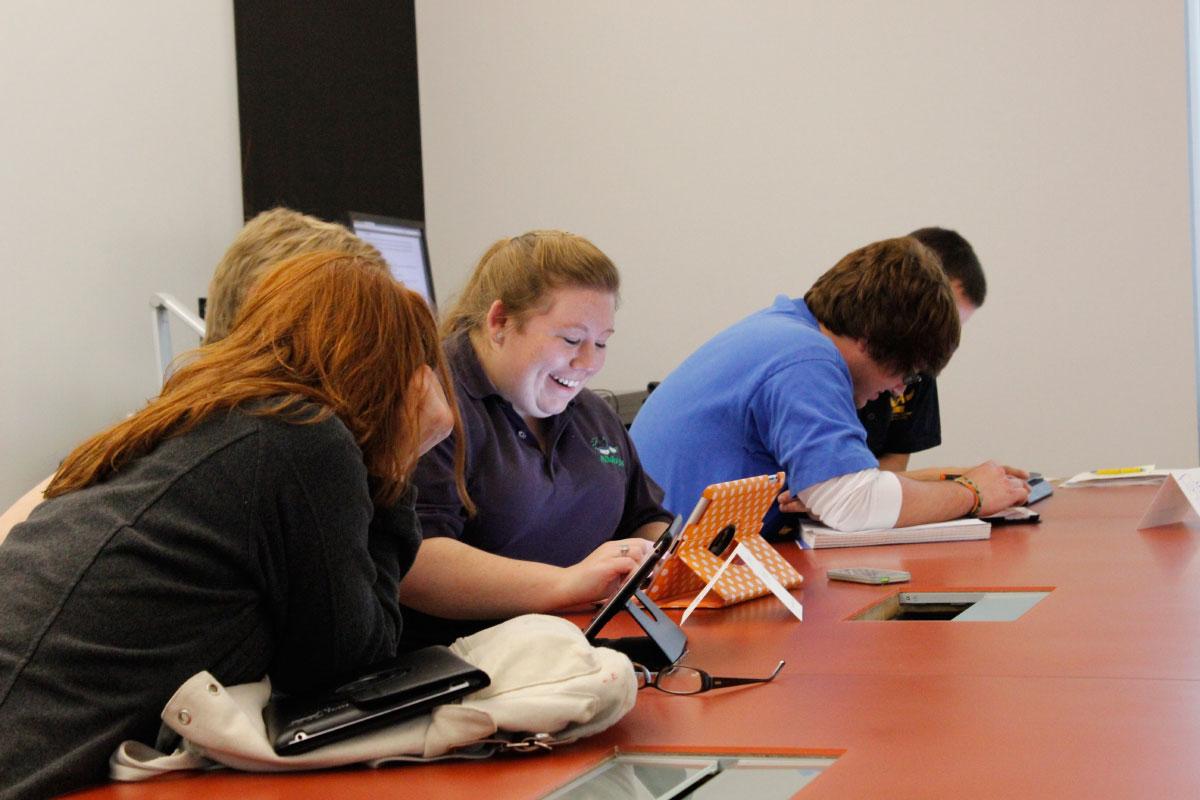 NKU’s new provost Sue Ott Rowlands recognizes technology’s capability to reshape the world of higher education and is confident that the university is at the forefront of this transformative process.

“NKU is positioned to be a leader in technology enhanced education,” Ott Rowlands said. “Certainly our College of Informatics, but not just there… There’s always been attention paid to forward thinking technology.”

With the intense use of smart classrooms across campus, developing technologies such as augmented reality in literature courses, to new high definition equipment used to live stream athletic events, it is evident NKU is open to changes regarding technological advances.

But just how much has technology revamped NKU?

“If you go to some of the bigger universities, you’ll see that they don’t have projectors in their classrooms,” Mann said. “And that surprises a lot of people, including myself. When I go to UK or Louisville, they don’t have a projector in the classroom.”

Besides the number of technological enhanced classrooms at NKU, Ott Rowlands sees the university’s use of these classrooms as a way to promote collaborative, transdisciplinary, world-wide learning.

“I would like to see students in classrooms all over the world engaged with our classrooms at NKU in real time,” Ott Rowlands said. “There are just infinite and endless possibilities.”

Mann thinks that mobile technology is another factor in technology’s influence on higher education.

“Everybody has a smart phone,” Mann said. “It’s really changing the way students access their content and we are having to adapt our faculty in the ways to teach using that kind of technology.”

And since students are accessing resources through different mediums, Mann agrees that multiplatform technology is an area in which they must assist faculty.

“I had a faculty member tell me last week that her student couldn’t access comments on her paper and were tracking changes, but the student was trying to look at it from a smartphone,” Mann laughed.

Not only does NKU have a breadth of classes offered online, they have fully web-oriented course programs as well.

“We have a lot of online classes and they have grown tremendously since I’ve been here for the last 12 years,” Mann said. “We probably have third in the state for fully online courses and fully online programs, you can start and finish a degree totally online.”

Although completing a degree online can offer convenience, it can also pose issues with lack of personal interaction.

“Making sure that when we think about online education, that we think about those students as a part of a learning community just like a face to face class is,” Ott Rowlands said.

Since students can achieve a degree from NKU completely through online classes, Ott Rowlands suggests that NKU develops a more intentional online advising support and consistency in class formats.

To allow students to interact live in the classroom, more faculty are using iPads to enhance their everyday curriculum.

“In fact we know several faculty that are allowing students to take their test in class on iPads instead of using the old paper scantrons,” Mann said. “We also have a faculty member experimenting with augmented reality and she’ll be using that in a literature course coming up within the next year.”

Constantly evolving teaching methods are being adapted by faculty to keep up with the digital age.

“Students now learn by connecting with the internet, with other people, so it’s a whole different way of learning for those students,” Mann said. “So we have to help the faculty keep up to the pace and learn to integrate some of those kind of connections into the classroom.”

Ott Rowlands agrees with Mann and sees these changes as a way to improve the educational process, rather than take away from it.

“…Think about the way technology can help in the classroom and in virtual co-ops and virtual learning environments,” Ott Rowlands said. “Maybe we can’t get you to Crimea but through technology we could have a very robust conversation with students in Crimea.”

Overall Mann and Ott Rowlands believe it is of the utmost importance for NKU to stay up to date with current technological trends for the sake of student success.

“I think what the faculty are interested in are ways in which we can have these things sort of permeate the culture, so that an NKU education and an NKU degree really means that we have been on the forefront of academic innovation,” Ott Rowlands said.