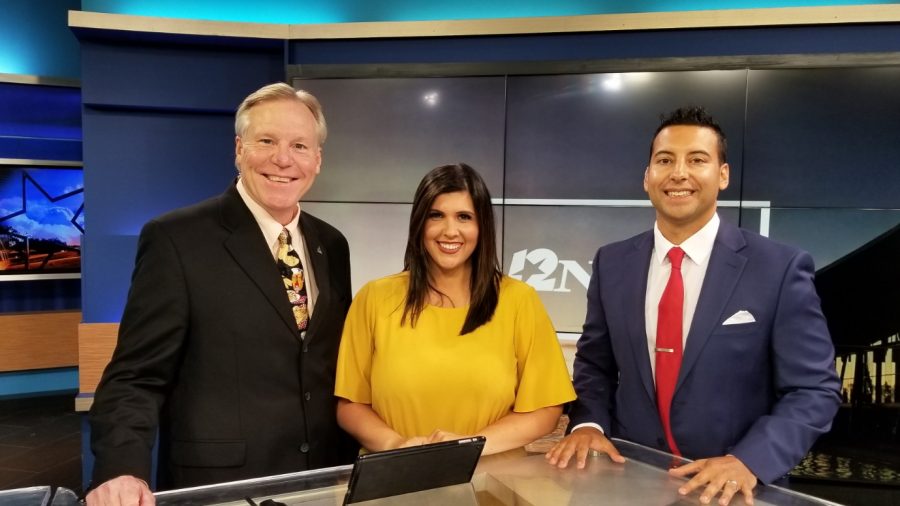 When were you at the Northerner?

Started out as a sports contributor then after a few articles worked my way to sports reporter. After almost a year at the reporter position, I became the sports editor until I graduated in December of 2018.

As a sports reporter/anchor, my career over the past 8 months has been crazy. After I graduated in December of 2018, I signed my first television contract in February and started in March of 2019.

Originally I was supposed to make my on-air debut about two-weeks after I started. That quickly changed and I was thrown into the fire just 4 days into the job!

Since then, I’ve had the opportunity to cover the NFL, MLB, NBA, Youth sports, College sports and High School Sports on a daily basis.

Sports reporter/Sports weekend anchor for KBMT-12NewsNow (ABC affiliate) in Beaumont, Texas. I fill in on the weekdays when needed but mostly on-air on the weekends. I write, edit, produce and shoot my own shows.

I was able to carry over the skills I learned from The Northerner into the world of television. What I did for the paper (cover games, write, edit, interview players and coaches, build relationships with the team and their athletic directors, network with fellow journalists, write feature stories, figuring things out on my own, deadlines, etc.) is no different than what I do on a daily basis.

Only difference is, it’s television as opposed to print.

What’s something you miss or don’t miss about The Northerner?

Though my time at The Northerner was short, there’s nothing I miss or don’t miss about it.

Don’t get me wrong, I will always feel indebted to The Northerner because it gave me my start and the opportunity to see what this crazy bubble is all about, it’s just that everything I do now is what I was doing then and I’m loving it.

I do however wish I was able to build more of a relationship with my peers during my stint because that is so key in this field. Due to my outside schedule, I was never able to build any type of relationship. I literally did my work, turned it in and moved onto the next thing in my life. However, the few times I was able to hang around the office,  I genuinely tried to get to know everyone and had a great time sharing some laughs non-related to the work we were doing.

What is a piece of advice for The Northerner staff?

I could probably give a ten minute speech on this but I will break it down in short form as best as I can. Get an internship. I can’t stress how important this is. Prospective employers are more inclined to offer a job to someone with real experience and who has a recommendation from someone in the field as opposed to someone who just went to school and their only experience is what they learned in the classroom.

Learn to network! Relationships are key in journalism and television. The most qualified person doesn’t always get the job. Who you know is just as important if not more than actually being good at your job. (Sad but true)

Whether you’re in journalism or television, find a way to connect with your audience. Success won’t happen overnight, you have to be patient. Most importantly, be yourself.

Be humble. Be dependable. Listen and ask lots of questions. Also, try to surround yourself with smart and motivated people.

Lastly, don’t waste the time you have at NKU. Nothing worse than being in a classroom full of seniors and the majority of them have no idea what they’re doing after graduation and either go back to school because they can’t move on or didn’t set themselves up for success. Take full advantage of the opportunity given to you by the school and always remain positive. The rest will work itself out.