The Grapes of Wrath: Sept. 29-Oct. 9 in the Corbett Theater 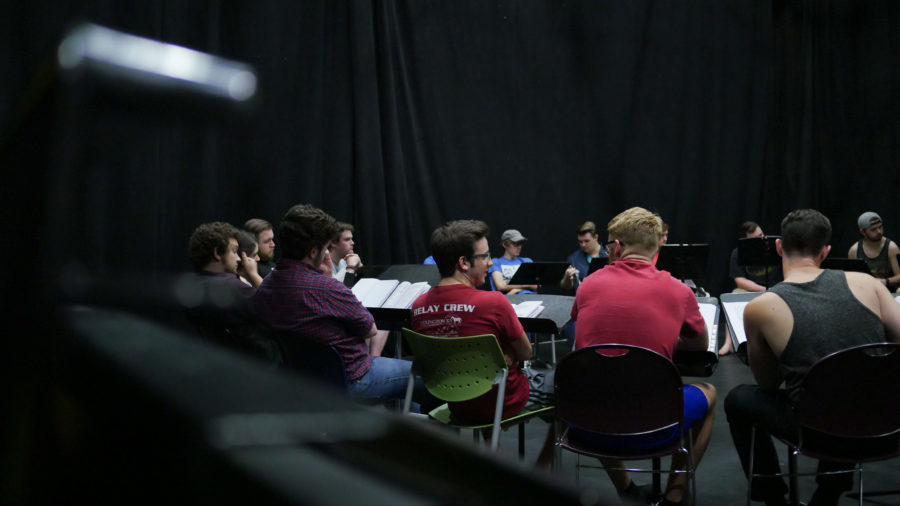 Cast of “The Grapes of Wrath” reads over their lines during rehearsal.

Director Corrie Danieley advised the cast members to read John Steinbeck’s novel, listen to music such as Woody Guthrie, do some labor intensive work and spend time with their families, particularly older members.

“Fortunately this time period isn’t too far away so we have plenty of video footage, documentaries and even people around who remember it,” Danieley said.  “We’re very fortunate in that way.”

Frank Galati’s stage adaptation follows the same story as Steinbeck’s novel.  Set during the Great Depression, “The Grapes of Wrath” follows the Joad family as they’re forced away from the Oklahoma Dust Bowl.

“It’s really Americana, and you can see lots of parallels in what we’re going through today,” Danieley said.  “This depression, we need hope, we need light at the end of the tunnel in America.  The play’s about loss, and it’s about hope– and humanity surviving– because that’s what it was.”

Danieley said production has gone smoothly for the most part, but there have been a few snags along the way, one of them being the stage in the Corbett Theater.

“The Corbett stage needs repair, the stage is sloped and it’s breaking down,” said Danieley.  “You can imagine our crew trying to make this level on an unlevel foundation. It’s awful.

“I really give props and accolades to our crew and our set builders.”

Danieley’s “The Grapes of Wrath” will also feature a string band that double as actors in the performance.

“Sometimes they’re going to work together, sometimes they’ll be individually floating throughout the show,” Danieley said.  “I’m really glad we have the student talent to do this.”