The festival started off in the brand new Indie Craft Village with a free show by the band Dale Earnhardt Jr. Jr. playing on the small makeshift stage of the gazebo in the center of Washington Park.

Aside from watching the show, patrons of the festival could grab craft beer from the vendors in the village.

One of those vendors supported the Kelts Rugby Team.

Tents surrounded the outside of the gazebo area which included a Blu tent for the vape company, several music tents and a WNKU tent.

Another volunteer held up one of the wristbands with their mission statement on it that they were giving away for free.

They also were raffling t-shirts and selling other merchandise.

Following along the path of music and craft beer, patrons could find many food trucks. One of the food trucks would be home to Umami Bites.

Sarah Stoner, one of the workers for the truck could be seen smiling at the window as she explained where the inspiration of the food comes.

This was their second time being at a big music festival with the first one being Bunbury Music Festival and the truck will be returning to MidPoint on Sunday.

The real draw were the bands that were playing the main stage at Washington Park like Purity Ring, HANA and Nick Diamonds.

Willis said that she really started to like MidPoint after getting into music more and that she loves the ability to walk around during the festival instead of being stuck in one place.

Willis’ friend Satoru Matsubara talked about coming from Japan and finding that he likes MidPoint a lot.

Performers that were not playing Friday night were still excited to be there.

George Byrd of Gran Bel Fisher will be playing Sunday. Byrd’s band is playing MidPoint for a second time and will take the stage before Iron and Wine.

“We have kind of a Hall and Oates feel,” Byrd said.

Byrd also said that he can’t wait to see the patrons laying down blankets before their show and getting to know their music more.

MidPoint Music Festival affects the attendees as much as the local vendors and bands. The rest of this musical weekend will continue until Sunday night. 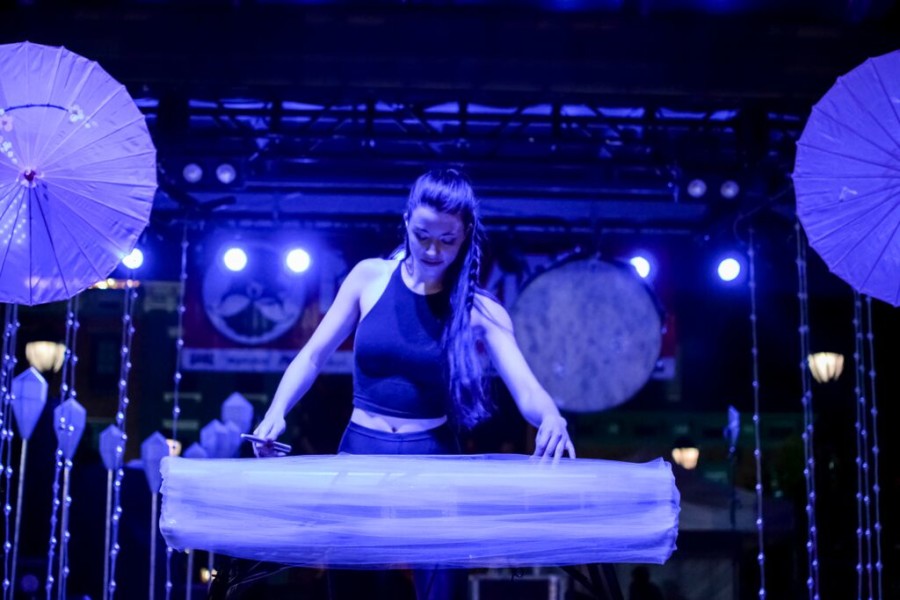 Over the Rhine was packed with music lovers Saturday night. At 8:30 p.m., the line to get into the Drinkery on Main St

was 10 people deep. Shortly after 8:45 p.m. the stage lights went up and the band JSPH began their first song, “Victim”.

Victim is an upbeat song from JSPH’s first album, Rest. The band, which is made of six members, played seven songs from both their albums during their 25 minute set.

Lead singer Joseph Nevels opened with references to his Northern Kentucky ties and joked about the great distance it is to cross the Ohio River into Cincinnati. The crowd gave positive feedback from the beginning.

Chelsea Devers, a junior studying PR at NKU, said her favorite song is “Magnetic” because of its fast pace and layers of meaning in both the music and lyrics.

The Drinkery was packed with music enthusiasts of all varieties. JSPH has no stereotype audience, said Isaac Karns, 27 and friend of Nevels.

“This (JSPH) is a talented group of people everyone should be interested in,” Karns said.

The crowd cheered and interacted with the band, Nevels assigned the crowd a singing part in the song “LMNM”. The crowd happily did their part and sang their assigned, “ooh ooohh oooooh.”

Emily Karns, 27, who was watching JSPH for the first time said the whole band was super sweet and fun to listen to.

Nevels said the whole set went really well with great energy from the crowd and community.

This show helped build experience for the band which will be playing again at Ubahn Fest this October in Cincinnati.

“I really enjoy this music. It is fun but still with lots of depth and hidden meaning,” Sophia Beya, 27 and a backup singer for JSPH said.

The band ended with a crowd favorite, “Forever” which was featured in the Lifetime movie Wuthering High School.

With the set over, the band kept it low key, packed up their own equipment, and interacted with the crowd. Nevels said he is excited to explore other local bands at the Midpoint Festival.

“I am looking forward to Sylvan Esso tonight,” Nevels said.

Beya said the mixing of genres is what really sets JSPH apart and gives it appeal.