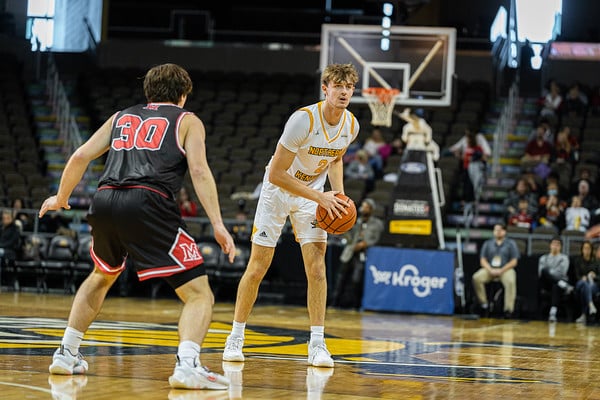 Northern Kentucky University sophomore Sam Vinson is second on the team in scoring and rebounding, playing a big role in the Norse’s rise to the top of the Horizon League standings.

The moxie that Sam Vinson carries isn’t necessarily intentional, rather something that comes natural to the Norse sophomore.

“Sam is a guy that has great swag. We call him Sammy Burrow,” Northern Kentucky University basketball coach Darrin Horn said. “He has a certain presence and confidence to him.”

Sam’s swag for the Norse has helped them tied atop the Horizon League Standings at 8-2 in conference play, including two key victories the last few days over Cleveland State and Purdue at Fort Wayne.

Vinson’s play on the defensive end in his sophomore season is where he’s standing out for one of, if not the best defensive team in conference play. His length and ability to deflect passes has always been a strength, but in high school maybe it wasn’t noticed as much with his play on the offensive end. He scored just under 1,800 points in his high school career in helping lead Highlands to a KHSAA state title in 2021.

“In college you’re surrounded by great players. I know I need to score a little bit, but finding my teammates and getting others involved is my role. If I can help get them going on the offensive side, I know it will help me with knocking down shots and finding the open man,” Vinson said.

His all-around game is really showing in his sophomore season. He’s second on the team in points and rebounding, third in assists and second in minutes per game. Not only is he leading the team in steals per game, but he ranks in the top 10 nationally with 2.5 swipes per contest.

When Horn was recruiting Vinson at Highlands, he caught Horn’s attention with everything else he was able to do on the floor outside of scoring the ball.

“The biggest thing about Sam in general was we just thought he was a basketball player. Nothing in particular, shooting, scoring, athleticism, just a basketball player,” Horn said. “The big part was that he impacted the game on both ends. A guy that clearly was a guard, but he deflected the ball a lot and blocked shots. You don’t see that a lot form guards in high schools that block shots like he did. He’s a good athlete and has good size, but his ability to do that is what separated him.”

Now those basketball player instincts Horn speaks of play a major part in the Norse as one of the top teams in the Horizon League, sitting in tie for first with Milwaukee halfway through the conference slate. The Norse welcome the Panthers to Truist Arena on Saturday, trying to avenge a 80-75 loss on January 12.

“Basically just the way we play defense, it’s a matchup zone kind of thing and with us showing length and having long, lengthy guys and being in passing lanes, it helps being in the right passing lanes,” Vinson said. “Defense is our identity and I just try to play as hard as I can on that end.”

In order for the Norse to get where they want to be come March when the conference tournament hits, Vinson knows it starts and ends on the defensive end. The saying is, “defense travels” and the Norse will have to do just that down the stretch as seven of their last eight games are away from Highland Heights. NKU has two home games this week on Thursday and Saturday and then just one home game for all of February.

“Whoever has the best defense is going to go the furthest. End of the game it comes down to stops. Defense can win and lose you games, we just need to stay locked in and keep it going,” Vinson said. “Defense is our identity, it leads to better offense. We want to dictate what the other team does, we don’t want them to be comfortable and not let them know what happens next.”

With some elite scorers in the conference that includes Detroit’s Antoine Davis, only the second leading scorer all-time in NCAA history, Oakland’s Jalen Moore, Wright State’s Trey Calvin and Youngstown State’s Dwayne Cohill, who all rank in the top 100 nationally in points per game, defense will play a major factor in making sure those four don’t single-handedly help get their team into the NCAA Tournament, something that can often happen when the cream rises to the crop in March.

Once Vinson gets more consistent on the offensive end, he’ll continue to elevate himself. He’s made strides at time this season and no further evident than Thursday night’s buzzer-beating win over Cleveland State. On top of delivering the game-winning assist to Marques Warrick, Vinson scored seven straight in a crucial stretch in the closing minutes of the contest and finished with 16 points. The game prior he poured in 13 points against Green Bay and then had a season-high 17 points in Saturday’s win over Purdue at Fort Wayne, the Norse’s “most complete game of the season,” Horn said afterward. The three straight games in double figures for Vinson are his longest consecutive stretch of double-digit games since he opened the season with three straight games in double figures.

Confidence is rising for Vinson, Horn saying at times Vinson can be his own worst enemy.

“Sometimes he’ll pay too much attention to the last play. We have the utmost confidence in him and he’s the most complete player that we have and we’re just trying to help him understand that. He works so hard and wants to play well offensively, he’s still finding his way with this level. Often times in the NBA guys talk about getting to their spots, Sam is still working on that. He’s starting to do that more often lately and efficiency-wise we think he can be a more efficient offensive player,” Horn said.

The Norse return to action Thursday night when they host Green Bay, looking to win their fourth straight. If the Norse win that one and Milwaukee wins at Wright State on Thursday, it would then set up Saturday’