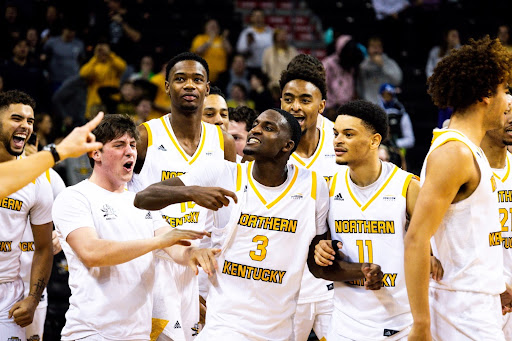 Gallery|3 Photos
Emory Davis
Marques Warrick celebrates with his teammates following NKU’s thrilling 57-56 win over Cleveland State Thursday night. Warrick had 19 points during his birthday bash, including a buzzer-beating three at the end of regulation to win the game for the Norse.

NKU athletics have many factors to be thankful for after the electric conference win over Cleveland State.

The Vikings were a tough battle as both teams played extraordinary defense in this game. The challenging match up exposed the Norse to what they need to improve on, while also showing the effort each team brought to the court.

The fans of the Norse showed their colors during the neon themed match up, bringing a lot of energy into the game.

“The crowd definitely made a difference,” said head coach Darrin Horn, who reiterated that fans were “getting their money’s worth” when coming to Norse basketball games.

Not only did this game highlight the men’s basketball program, but additionally recognized all student athletes on their academic accomplishments. The celebration added a positive atmosphere to the night, recognizing NKU as a successful institution.

“We are a small part of a thriving university,” Horn said.

Trevon Faulkner made his move to the top 10 all-time scorers in NKU men’s basketball history. Faulkner demonstrated what a great teammate is as he explains the mindset the team has during these high intensity games.

“Just trying to stay poised in the moment.“ Faulkner stated.

“Nobody has done more for this program in terms of their commitment to being about Northern Kentucky University winning, and sacrificing what Trevon does.” Horn said about the veteran guard.

Thursday night wasn’t the first close game the basketball team has faced this season, and Horn stated that the grind over the course of the year has trained his team to remain focused when they are down.

“We knew this was gonna be a grind out game, [we have] a ton of respect for Cleveland State,” Horn said. “We knew they were gonna be aggressive and play hard. Those games are not gonna be pretty.”

Junior Marques Warrick started off the game with an easy layup followed by back to back three-pointers from fifth-year senior Xavier Rhodes and sophomore Sam Vinson.

The first half ended 27-25 with the Norse up, bringing energy into the second half.

With the clock winding down, Vinson hyped up his team and the crowd by going on a crucial run, hitting a three to tie the game with 2 minutes on the clock. The run continued with an aggressive drive in the paint from Vinson.

The Vikings tied the game with one minute to go, which was soon followed by a fast break layup from Sam Vinson saving the energy.

The last 20 seconds consisted of high pressure free throws from both teams which ultimately led CSU to the lead near the end.

With seven seconds of the clock and the Norse down by 2, Vinson drove the ball up the court and dished out an assist to Warrick, who made the game winning three as time ran out.

“Everyone is going to talk about the shot that Marques made, which is fantastic, but it doesn’t happen if Sam doesn’t execute it right,” Horn said.

The two back to back freshman of the year players teamed up together for the win on what Warrick said was “…the best birthday I’ve ever had.”

The Norse have another tough test Saturday as they host Purdue Fort Wayne. The Mastodons and Norse are set to tip off at 6 p.m., with the game being broadcasted on ESPN+ and ESPN 1530.