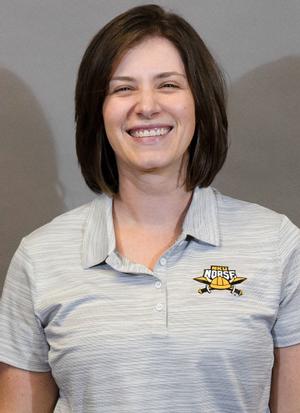 From a young age, Rachel Hyde has always had a strong connection to golf. Being taught by her grandfather and playing on the men’s golf team at her high school, Hyde’s goal was to play at the collegiate level. She was able to land a spot on the NKU golf team and graduated in the year 2013 with a degree in exercise science.

Hyde spent three seasons being the number one golfer while playing at NKU, so there was no doubt in her skill level to become a coach. Right out of college, she went into a career in exercise science, but soon realized how much she missed golf.

“Thomas More was hiring a part-time women’s golf coach, so I stayed there for seven years before coming to NKU,” Hyde said. “The experience I had at Thomas More really prepared me to become the head coach at NKU.”

During her years of playing at NKU, she was the co-president of the NKU student athlete advisory committee, staying actively engaged in the athletic department as the voice of NKU student athletes. She was also awarded the Career Service Award while playing for the Norse.

“She was selfless, always there for all her teammates,” said Molly Woods, the head athletic trainer for NKU. “To be a coach at the Division 1 level, the main quality you must contribute is leadership which is Hyde’s strong suit. I always knew Rachel would be in a leadership role.”

During Hyde’s time here at NKU, there were no strength and conditioning coaches or nutritionists, but that didn’t stop her from striving to be great.

“She would come into the athletic training room asking questions, trying to learn more everyday, wanting to get in shape,” Woods said.

Hyde is always looking to learn more from her peers, she explained.

“I got to be the women’s coach here for one year while Coach Daryl Landrum was still the men’s coach, so because of that I got to talk to him and ask him questions,” Hyde said.

This goes on into her coaching career at NKU as she enjoys watching her young team learn and grow into the collegiate level.

Hyde is actively engaged in the program, and not much has changed since her time playing here.

“Coach Hyde is encouraging, she is always trying to help us have a positive attitude even when things might not be going our way. She always looks at the bright side of things,” said junior women’s golf player Abby Cook.

Hyde was hired at NKU in 2021, but while coaching at Thomas More she was awarded Presidents’ Athletic Conference Coach of the Yearas she coached her team into their first ever conference championship. Coach Hyde will keep working to bring similar success to the future of NKU’s women’s golf team.