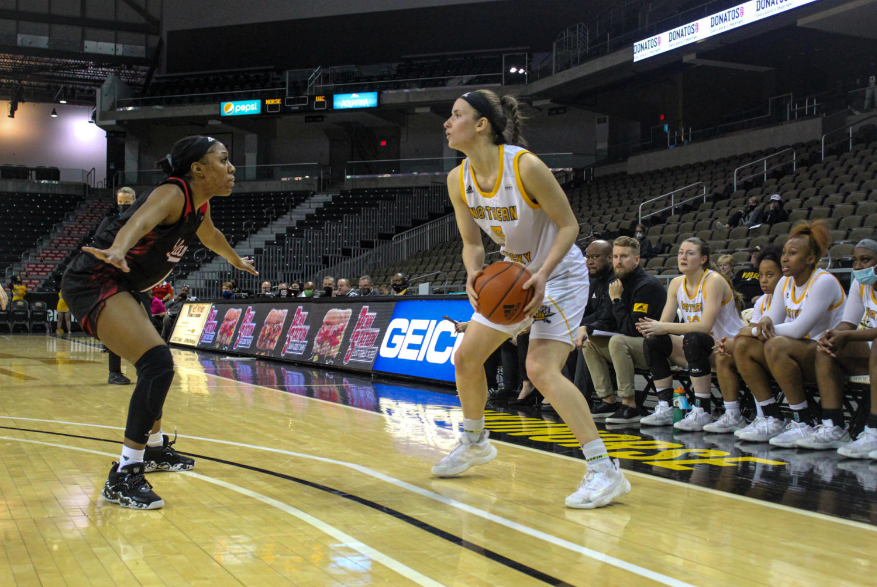 The Norse women’s basketball team opened their season at home in exciting fashion as they beat the Lipscomb Bisons in triple overtime 101-95.

The first quarter began with both teams trading baskets as the score was tied at 10 at just under six minutes. The Norse were aggressive from the tip, but that really shined after that point. The Norse finished the quarter on a 14-6 run thanks to Khamari Mitchell-Steen’s 12 points coming off a pair of free throws and five made field goals, and the Norse’s all-around aggressive play forced Lipscomb into seven fouls and six turnovers in the quarter.

The second quarter began with Steen continuing to be aggressive as she scored the first points of the quarter, but the Norse would struggle from the field as they were unable to make a basket from the field from nine minutes up until an Ivy Turner layup at the five-minute mark. The Norse would find their stride soon after as the lead ballooned to 16 after a couple of layups from Lindsey Duvall and one from Turner. The Bisons would respond with an 8-0 run of their own on their way to cut the lead to 38-31 at halftime.

The Bisons would keep that momentum going as they began to cut into the lead. After a couple trips to the line and a Jalyn Holcomb layup, the lead had shrunk to five. The Norse would not make their first basket of the quarter until almost three minutes in on a Duvall layup.

After a couple more trips to the line and a Claira McGowan three pointer, the score was tied at 44. The Norse would regain the lead after a 8-2 run, but the Bisons would have the final say as they ended the quarter with a two-point lead, with the Norse shooting just 28% from the field and 50% from the line in the quarter.

The game was back-and-forth in the first five minutes of the fourth quarter with the Norse shooting 4-5 from the field and Lipscomb 5-7, which resulted in a tie at 66. Aleah Sorrentino had two trips to the line and a layup to give Lipscomb a 72-68 lead late in the fourth. With under two minutes, Tayah Irvin fouled out after a personal foul, followed by a technical foul for the Norse.

Sorrentino and Jalyn Halcomb combined to go 3-4 in those trips to the line to give the Bisons a 75-72 edge, but Duvall gave the Norse a two-point edge with 28 seconds left to play. After missed free throws for Lipscomb, Steen split a pair of free throws, leaving the door open for a Bella Vinson three pointer that would send the game to overtime.

The first overtime got the scoring underway with a Duvall layup to give the Norse a two-point advantage. The rest of the overtime would be plagued with turnovers and poor shooting as the teams combined for 2-12 from the field and seven turnovers which led to the need for a second overtime.

The Bisons would start quickly in the second overtime after a 8-2 run would give them a 90-84 edge. The lead increased to what seemed to be an insurmountable 93-84 lead with just under two minutes left in the overtime, but a couple trips to the line and a Steen layup would cut the lead to 95-91. The Norse were able to force a jump ball right after, which led to Lindsey Duvall’s first three pointer of the game.

Ainhoa Cea would be fouled after that but missed both free throws. Duvall took advantage with one of her many trips to the line on the night as she would split the free throws, sending the game to a third overtime.

The third overtime saw no field goals scored, but the Norse were led by relentless play on offense and defense from Duvall. Three Bisons players fouled out in the third overtime as they tried to defend Duvall, who would not be denied. Duvall’s big night was capped off by free throws that put the Norse up five on their way to the 101-95 victory.

Along with the 27 free throws, Duvall finished with 36 points, 15 rebounds and six assists. Coach Whitaker said the multiple free throws is something they strive for but credited her experienced team for the comeback victory.

“We want to make more free throws than the other team shoots,” Whitaker said. “But it defines who they are … they found a way.”

The Norse will look to keep this momentum alive as they go on the road to play Kent State on Sunday, Nov. 13. The game can be seen on ESPN3.