Jørgensen’s Journey: From injuries, surgery and COVID to captaincy 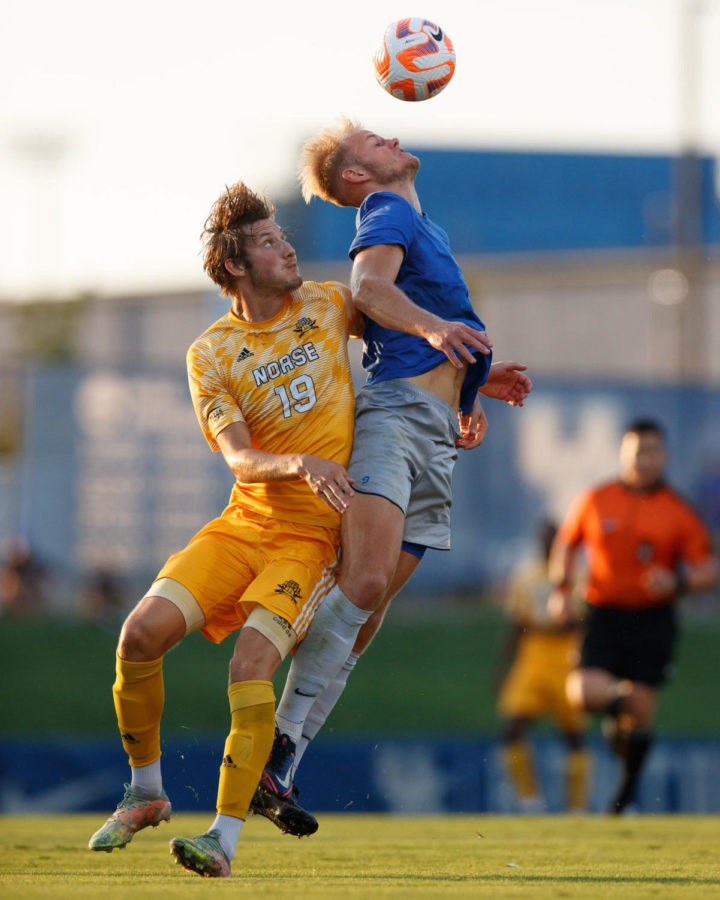 Stian Jørgensen, a native of Oslo, Norway, joined the NKU men’s soccer team in 2018 as a central defender. The Norwegian’s love of soccer began at age five, with him crediting his love for the game to his soccer-centric family.

“My grandad was a general manager for a big club in Norway, and my dad was a referee at a high level, so I was kind of born into it,” Jørgensen said.

The 6’3” defender began his career switching between playing in the central midfield and up front as a striker. It wasn’t until a growth spurt at the age of 16 that his coaches saw the benefits of using his height and power in the central defender position. His youth-playing career in Norway proved to be a successful one, with him being named captain of Oppsal IF’s Under 19 squad, being awarded player of the year at Oppsal in 2016 and taking his team to the Norway Cup in 2017.

In 2017, he took a gap year after graduating high school and was spotted by a scholarship agency at one of his games. The agent had previously played for Stu Riddle-NKU men’s soccer coach from 2017-2021-at Buffalo University and was the main reason Jørgensen encountered Coach Riddle. Before this, he had never even considered going to America for college soccer, and he is glad he took a chance on it.

“Stu reached out to me in late April of 2018 and said he needed a central defender and so I took that offer,”Jørgensen said.

In late July 2018 he arrived in America for the first time and found that he “really struggled with the language barrier, more so than the culture shock.”He had learned English at school but having to use it daily and in schoolwork proved to be a challenge. He credits his teammates for helping him grow his confidence.

“Wes tells me that by Thanksgiving I was speaking quite well and looked comfortable talking with his family,”Jørgensen said.

When looking at Jørgensen’s soccer career at NKU, one can’t help but notice the number of injuries the Norwegian has sustained. He suffered from a concussion during his freshman year and a grade two ankle sprain during his sophomore year. The athletic training team treated him with a cortisone injection, and he returned to playing.

The pandemic followed in spring 2020, causing the NCAA to cancel all fall competitions and activities. Jørgensen decided to stay home in Oslo for the semester to continue practicing, and he chose to study online.

“I think that was the best decision as I could still play soccer, and the restrictions in Kentucky were pretty tough at the time,” he said.

He returned to NKU in January of his junior year and injured the same ankle, having landed on it while jumping for a header. He was once again treated with a cortisone injection and after one missed game returned to play.

However, his worst injury was yet to come. In the summer of 2021, he decided to stay in the U.S. and play club soccer in New York with his fellow Norwegian teammate, Tobias Karlsen.

Due to the cancellation of the fall 2020 season, the Horizon League season was moved to the spring of 2021, with NKU winning the regular season championship.

Jørgensen believes playing during the spring and going straight into the summer season is what caused him to injure himself.

“It was just a lot of soccer, and I don’t think I was mentally prepared for that and that’s when I went and did my groin,” Jørgensen said.

He thought he had strained his groin, but further medical examinations found he had a sports hernia. This required surgery and partial removal of muscle that had died due to the fully-severed tendon.

“He fought through it, and he could have quit but that’s not who he is,” Woods said about his groin injury.

The fight and determination Jørgensen showed throughout all of his injuries, as well as his attitude to rehabilitation, is the main reason Woods chose Jørgensen for the Athletic Trainer’s award at the Victors Awards’ show in April 2022.

“He is always trying to make himself better; he shows up and just does his thing, always with a smile on his face,” Woods said.

Jørgensen graduated in May 2022 with a major in finance and a minor in accounting. He is currently studying his MBA and playing his fifth year for the Norse.

Sam Robinson transferred to NKU from the University of Cincinnati in 2020 and immediately connected with Jørgensen.

“He’s the archetype of a friend; he’s reliable, smart, funny, and hardworking. I’ve always felt like I could reach out to him,” Robinson said.

When Robinson discovered he would be sharing the captaincy with Jørgensen, he was thrilled. Jørgensen’s knowledge of a more European style of soccer has taught Robinson a lot and is something he believes provides the team with an edge.

“[Jørgensen] is a strong and commanding presence in the back, and his knowledge of the game runs deep,” Robinson said.

Jørgensen will graduate in May 2023 with his MBA and plans to start working in August when he returns to Norway.

“I have a job lined up in financial advising when I get home, and I’m going to see if I can still play a bit of competitive soccer as well,” Jørgensen said.