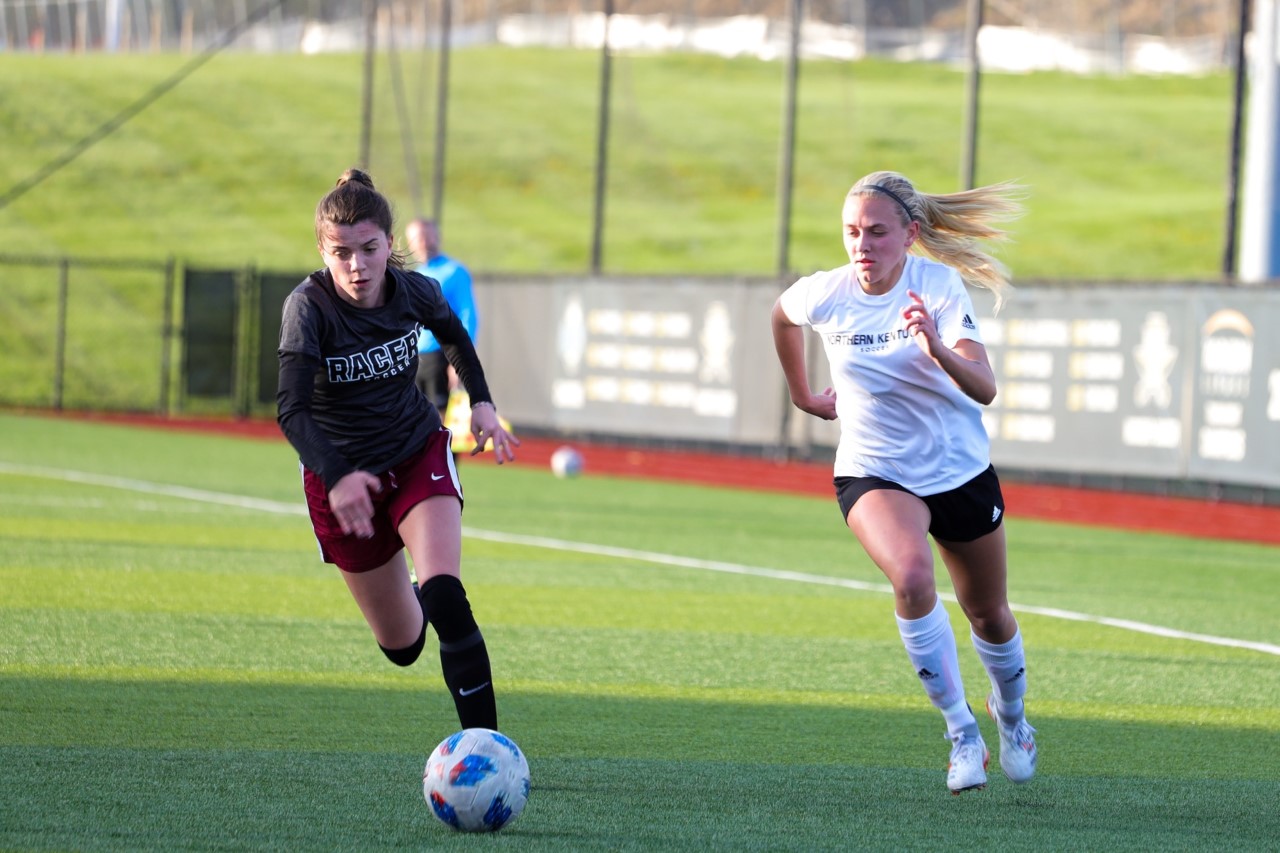 Lindsey Meyer dribbles against Northwestern Ohio in the Norse’s spring game on April 14.

The preseason for Northern Kentucky women’s soccer has seen a lot of changes to the team. With the departure of a couple key seniors, the team is transitioning its younger players into more prominent roles.

So far, the spring season for the squad has had its ups and downs but they are seeing lots of positive growth early on.

“Overall, I am pleased with what I’ve seen from everyone on the team this spring. We are focusing on individual growth for players in the preseason and lots of players are taking on bigger roles to fill the voids from last fall.” said head coach Bob Sheehan.

The aspect that has made Sheehan most proud is the accelerated offense from last season which at times failed to find the back of the net. As for why the squad has seen an uptick in success on offense, forward Annie Greene credits it to “better ball movement and passing.” “This preseason, we are just doing a really good job of finding the open player and keeping constant pressure on opposing defenses for 90 minutes, which has resulted in us scoring more.”

Fans of the team have even taken notice of the club’s early success and growth in the spring.

Harrison Kitchen, an avid fan of the team said, “Even from the sidelines you can tell that this team is just moving faster and playing with more strength on both sides of the ball in the preseason.”

Despite the new faces and youth of the team, they have been playing well, and Sheehan hopes to see their continued growth as they finish playing the final couple games of their spring preseason.

As the spring begins to come to a close and players are starting to solidify their roles for next season, the starting lineup could look like this.

Note: Player year listed is current as of spring 2022.

After starting in eight games her sophomore year and 14 last season, Abbott has become one of the team’s most reliable defenders. With her continued growth on the defensive end, she is looking like a ‘set it and forget it’ starter for Sheehan in the fall.

Self came in her freshman season and made an immediate impact on the team starting 15 games. In just her first season, Self took home Freshman of the Year, All-Freshman Team, and All-Second Team Horizon League honors. After a great fall, she looks to carry over her early success to next season.

Starting in 18 games her freshman season, Sullivan once again started every game of her junior year after recovering from an injury that kept her out all sophomore year. The tremendous speed and physicality Sullivan brings to the pitch has propelled her into a starting role since she began with the team.

Harper played in 14 games last season in her first year with the team after transferring from Xavier her sophomore year. Her ability to play multiple positions and be physical at the point of attack will make her a plug-in starter for Sheehan’s squad next season and help round out the backline of defense.

During her time at NKU, Wypasek has taken on more and more responsibility in every season. Thanks to a solid fall season, she will be seeing even more playing time next season and will most definitely be in a key leadership role for her senior season.

Heading into her senior season, Wall will be an anchor for the midfield and will be an important piece to the first line of attack and defense for the team. Wall is a solid scorer, ball facilitator, and wins many 50/50 balls on defense. She will be one of the veterans of the team along with her other senior teammates in the 2022 season.

Vogt has started every game of her collegiate career and has been a cornerstone for NKU’s midfield since she stepped on campus. She one-upped her selection to the All-Freshman Team in her first season when she was named to the All-Horizon League First Team a season ago. Going into her junior season, Vogt will once again lead the Norse’ midfield with her strong play.

In the past two seasons, Meyer has served the team as an every game starter at the forward position. During her tenure with NKU, she has exemplified a unique ability to create offense in many different ways with her eight goals and 12 assists in her collegiate career. These qualities will no doubt make Meyer a full time starter in the fall once again.

As the season progressed last fall, Greene began seeing more and more game action and even started a handful of matches. With her continued growth, the junior looks to be primed for a starting role at forward in her final season with the club. Greene brings a great amount of energy to the pitch for the Norse and will attempt to do so once again in 2022 for NKU.

Wilmes has been one of the premiere scores in the Horizon league since beginning her NKU career. As one of the team’s young leaders, Wilmes had five goals and two assists in 2021, following her first year where she was named to the All-Freshman Team. The aggressive and quick nature of Wilmes’ game compliments the other starting nine well and makes them a top tier squad for next fall in 2022 Horizon League play.

Passing and finding the open player is one of the main things Sheehan stresses. Throughout the preseason, the Norse have continued that with stellar passing all around the pitch which has led to their offensive uptick so far.

2. Constant pressure/strong play at the point of attack is the defense’s play style:

To the delight of Sheehan, the team has been doing a solid job of playing strong defense and winning possessions this spring. This style of play has led to these offensive opportunities in the preseason early on. Continuing this will be a huge key to the Norse’s success next fall.

3. Individual growth in each player is the goal for spring:

Although the main goal is always growth as a team, Sheehan has talked many times about “individual development and growth” as the main focus of the spring. Many players have stepped up and shown growth so far this preseason, which has been crucial in filling the role of players lost from last fall.

4. Growth on the offensive end is a big focal point:

Stretches of offensive dry spells were the thing that held NKU back from being the great squad they were just a year before. Lack of offense was a big factor behind the five-game losing streak they endured in the fall of 2021. Coach Sheehan wants to see his team score more consistently, rather than in spurts like a season ago. The solid offensive showings so far this spring offers hope that this trend will change in the 2022 fall season for the Norse.

5. Seniors will play a huge role in the team’s success next season:

Eight of the 11 projected starters next season will be seniors. The starting 11 made up of mostly upperclassmen have had a successful spring and if the trend continues, it will bode well for teams’ morale and confidence heading into the 2022 regular season.