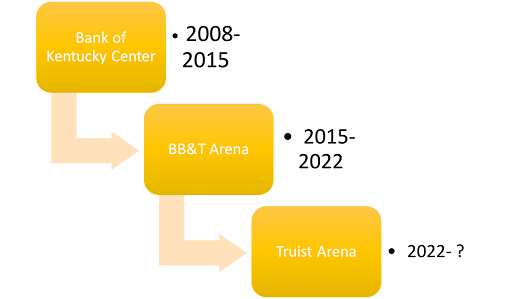 The change to Truist Arena is the third name change since 2008.

Some students may have noticed some changes happening to the arena at NKU, as the arena is undergoing its third name change since its completion in 2008. What was once Bank of Kentucky Center, then BB&T Arena is now called Truist Arena.

Clayton Castle, a Public Relations Specialist at NKU, went into detail on what the university does to make sure a name change happens smoothly, but also what goes into the process besides just the signage on the exterior of the arena.

“When an arena changes its name, all signage or references to the old arena name must be changed. That includes the large sign on the exterior of the arena and all signage inside the arena. Crews at NKU and Truist Arena have already begun working on this transition, replacing the old signage referencing BB&T Arena to new signage containing the name Truist Arena,” Castle said.

“Event patrons will also notice the name change on subtle items like tickets for the event and promotional items. Since this name change has already gone into effect, the arena will be known as Truist Arena at upcoming events such as the for KING and COUNTRY concert on April 23, Commencement on May 7, and the 2022-23 NKU basketball season”, Castle said.

With Spring Commencement approaching on May 7, and other events happening at the arena, these changes needed to be done in a timely manner, which can be stressful for administration and event staff.

The plan for the name change was in discussions to happen in the Fall of 2019 and be completed in Summer 2020, but the COVID-19 pandemic delayed those plans, according to Darren Stearns, the General Manager for the new Truist Arena.

Stearns went into detail about the effort it takes to complete this transition on the name changes to the arena.

“It can be very time consuming to get pictures and dimensions of the signs and to find contractors. This particular change was made easier, as the facility just completed a name change in 2015 from Bank of Kentucky Center to BB&T Arena, after BB&T bought out Bank of Kentucky.  We were able to use many of the same vendors that we used for that changeover, so we had pretty much a current inventory of what was needed and the dimensions of the signage from 2015”, Stearns said.

This isn’t the only arena name change that has happened in the area in recent months. In downtown Cincinnati, the old U.S Bank Arena changed its name to Heritage Bank Center.