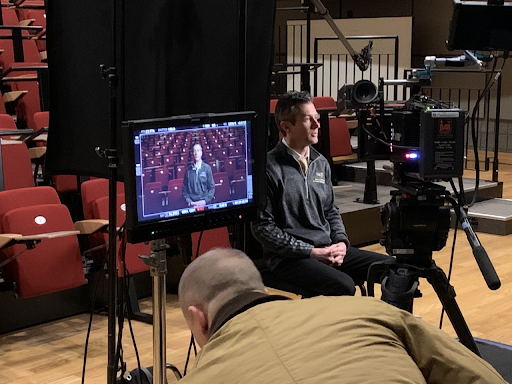 Bally Sports commissioned a production team to record Dr. Joe Cobbs and his course on rivalry for an upcoming documentary.

In February, Bally Sports commissioned a production team to record Dr. Joe Cobbs and his course on rivalry for an upcoming documentary in the fall of 2022 on Michigan vs. Ohio State in college football.

Dr. Cobbs is the co-founder of KnowRivalry.com, and his research got the attention of Bally Sports.

The Know Rivalry Project is a broad picture research of rivalry in sports. The research started with fan surveys about college football, and now it has turned into most sports all over the world over the last seven or eight years.

“There wasn’t a broad picture of rivalry, so my business partner and I decided to start interviewing fans about rivalry”, said Cobbs.

Sophomore accounting major Stephen Verst, who is a student in Dr. Cobbs rivalry course at NKU explained his impression of the Know Rivalry Project.

“The Know Rivalry Project is very impressive and takes a look at every rivalry in sports and what elements make up that rivalry. It is successful because all the data is from fans of the rivalries and their specific team so people know where the data is coming from and enjoy seeing what other fans’ opinions are.

Verst also explained that the project will continue to be successful in his opinion, because of the widespread interest that sports have in the world.

“The Project will never die because rivalries are always going to be a part of sports and fans will always be interested in sports. The Project will only continue to grow with the more credibility and awareness it gets. That is why it is so important to take every opportunity to get the word about the Project and website out there”, Verst said.

“It’s really important because we talk about these rivalries and have fans put it in on a scale 1-100 it really makes them think. It’s cool to see fans put that into perspective and why they think these teams are rivals because it could be geographical location, frequency of play, etc.” Krebs said.

Krebs also got help from Dr. Cobbs with a conference in Indianapolis with similar data on rivalry in sports.

“The basis of my research was a replication of Dr. Cobbs paper he wrote comparing rivalry in North American sports leagues, and it was a very fun experience”, Krebs said.

“In their research, they found online our research project page. It intrigued them and they contacted me and my research partner in November. They decided they were going to use the framework of our research which is the 10 common rivalry elements to frame the documentary as they tell the story,” Cobbs said.

The documentary will air in the fall before the Ohio State-Michigan game, though there is not a set date yet.