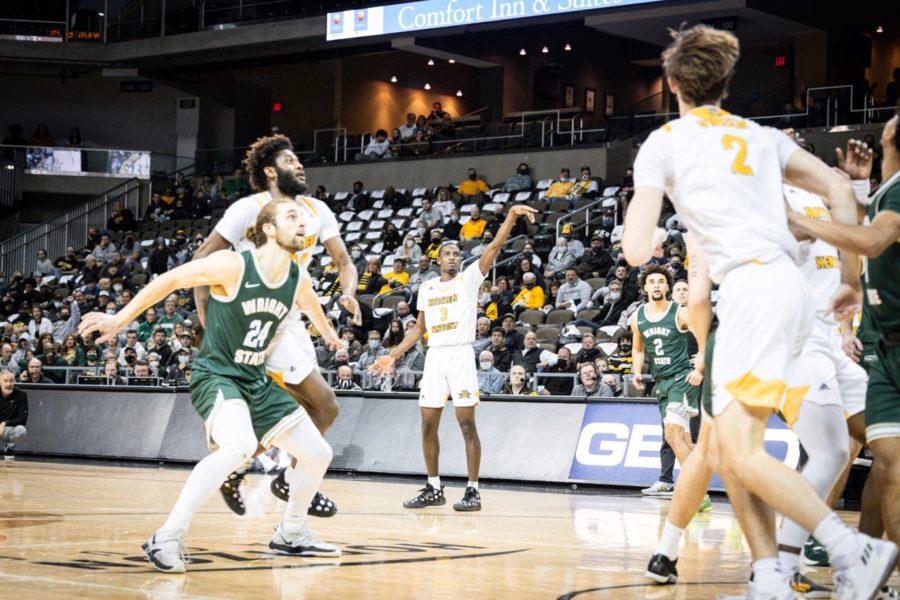 Marques Warrick scored 23 points in the Norse win over Wright State on Jan. 25.

On March 12, 2019 the Northern Kentucky Norse and Wright State Raiders squared off in the Horizon League Tournament championship, a game in which the Norse prevailed 77-66. Nearly three years later, the two teams will meet again in the same setting, facing off on Tuesday night at Indiana Farmers Coliseum in Indianapolis for the opportunity to compete in the NCAA Tournament.

“We won tonight because of the way that we defended, so it was really, really good to see that and be able to stay alive and play for another championship,” head coach Darrin Horn said following NKU’s win on Monday.

The Norse swept the Raiders in the regular season, winning Jan. 25 at BB&T Arena and Feb. 13 at the Nutter Center in Dayton, OH.

As the Norse get set for a quick turnaround to play the Raiders for the Horizon League championship on Tuesday night, here are several keys for the Norse to be able to come away with a victory.

A member-of the All-Horizon League Second Team, Basile finished with a game-high 27 points against Cleveland State on Monday, recording his 11th double-double of the season. Slowing down Basile and not allowing him to dominate the game offensively as he did in the semifinals will be crucial for the Norse’s chances on Tuesday.

Holden did not have the gaudy stat line that Basile did on Monday night, but still made a major impact in the win, scoring 12 points while grabbing 10 rebounds. A member of the All-Horizon League First Team, Holden is as dangerous of a scorer as there is in the league and will be a tough assignment, even for a Norse defense that stifled the red-hot Mastodons on Monday night.

“I think they have got two guys who are the best at what they do in Tanner Holden and Basile,” Horn said.

Two players who will have a major role in slowing down Basile will be forwards Adrian Nelson and Chris Brandon, a duo that grabbed 23 rebounds in the Norse win on Monday. When it comes to Holden, the Norse will likely rely on a committee of perimeter players, including freshman Sam Vinson and senior Trevon Faulkner.

In the last meeting between the two squads, Basile exploded for 25 points on 9-16 shooting from the field, while Holden was held in check with just 13 points on 4-10 shooting. For the Norse to be able to defeat the Raiders for a third time this season on Tuesday night, preventing both Basile and Holden from scoring in bunches will be paramount.

Lean on Warrick in the big moments

Sophomore guard Marques Warrick has been on a tear over the second half of the season, and especially his last five games. Since the Norse win at Oakland on Feb. 20, Warrick has averaged 24.6 points per game, converting on at least seven field goals each game. In January, Warrick dropped 23 points as the Norse defeated Wright State at BB&T Arena.

“Being one of the most impactful players on the team, that’s one of my responsibilities, I’ve got to step up when it comes down to it, so I love the moments,” Warrick said following that Wright State game on Jan. 25.

If there ever was a moment that the Norse needed their star sophomore guard and All-Horizon League Second Team selection to step up, it’s Tuesday night as the Norse compete for a championship.

Warrick struggled to find his three-point shot on Monday night against Purdue Fort Wayne, going just 1-6 from beyond the arc, but was still able to put together an efficient offensive effort, leading the Norse with 19 points and shooting 7-15 from the field.

“Credit to the guards for looking up. They got a bunch of transition, easy buckets, so that’s what got us going on offense,” Warrick said.

Nelson and Brandon both put on a rebounding clinic on Monday night, combining for 23 total rebounds in Monday’s victory, nearly outrebounding the entire Mastodons team, which had 29 for the game. The duo are two of the strongest rebounders in the Horizon League, if not the nation, but will be going up against a better rebounding team on Tuesday in Wright State.

Basile leads the Raiders with 8.7 rebounds per game, followed by Holden at 7.2 and redshirt junior Tim Finke with 5.2. For the season, the Raiders have collectively outrebounded their opponent on both the offensive and defensive ends, and outrebounded the Vikings 36-32 in their semifinal victory on Monday night.

The Norse outrebounded Wright State in the first meeting between the two rivals, though the Raiders grabbed slightly more boards in the second game. For NKU to pick up their third win in three tries over the Raiders this season, getting to the glass, particularly on the defensive end and limiting Wright State’s second chance opportunities will be crucial.

Here is how each team’s starting lineup looked Monday night for their respective semifinal games.

The Norse and Raiders will tip off on Tuesday night at 7 p.m. from Indiana Farmers Coliseum in Indianapolis. The game can be seen live on ESPN.

The winner of Tuesday night’s contest will receive the Horizon’s League’s automatic bid to the NCAA Tournament.