Warrick leads the way with 19 in defensive battle 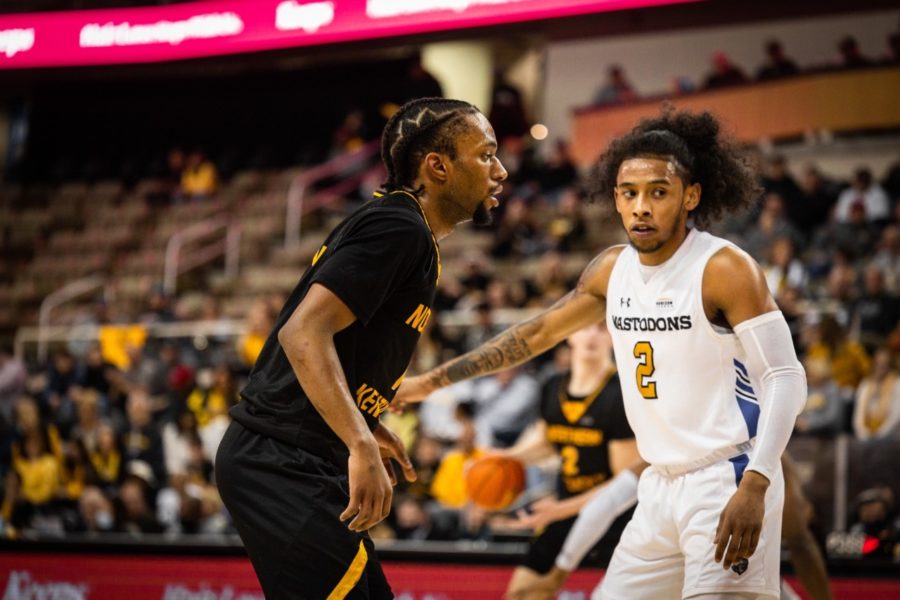 The Northern Kentucky men’s basketball team snapped Purdue Fort Wayne’s 10-game winning streak, holding the Mastodons to 29% shooting, including 15% from three, to advance to the Horizon League Tournament championship game by a final score of 57-43.

“A grind-it-out game in March where you’ve just got to find a way to win.” head coach Darrin Horn said. “We knew it was going to be a big challenge, and I’m really proud of our guys.”

The championship berth is the first for NKU since 2020, and the fourth since they joined the Horizon League. With a loss in their first conference semifinal appearance, the Mastodons dropped to 21-11.

NKU’s first two baskets came from beyond the arc, but they struggled with turnovers, committing three before the first media timeout. Neither team profited from the miscues, as each registered just one basket off of turnovers.

After finding early success from the outside, the Norse built their lead with high percentage shots, getting eight points in the paint as a 14-5 lead forced Horizon League Coach of the Year Jon Coffman into a timeout.

After making their first two shots en route to a 5-3 lead, the Mastodons proceeded to miss their next nine. To make matters worse, the top three-point shooting team in the conference missed all twelve of their first half attempts from beyond the arc.

After the Mastodons closed to within five, Bryson Langdon broke a five-minute Norse drought from the field with a tough reverse layup. The basket gave NKU 10 fast break points in the half, a testament to Horn’s desire to push the ball.

“To get stops and be able to get out in transition and get some easy ones was really important for us.” Horn said.

Two of the top-five defenses in league play battled to a 25-19 halftime score.  The low-scoring period was the result of poor shooting on both ends of the floor. PFW notched 31% shooting, while NKU wasn’t much better at 32%. Marques Warrick’s six points led seven Norse scorers, while Ra Kpedi quietly poured in seven points for PFW.

Damian Chong Qui, a Mt. St. Mary’s transfer with NCAA Tournament experience, drained the Mastodons’ first three to start the second half. But the Norse responded by forcing four turnovers en route to an 8-0 run behind baskets from Warrick and Trevon Faulkner. The latter tallied three points in the first period, but came alive after the break, leading the Norse with six points.

A four-minute scoring drought in the second half could have swung the momentum to the Mastodons. But NKU’s defense stepped up, holding PFW to four points on 1-5 shooting during that span. Layups from Trey Robinson and Adrian Nelson got the Norse back in the scoring column, stretching the lead to 16.

Horn has spoken about the evolution of the post position behind Nelson and transfer Chris Brandon. The duo was held to seven points but gathered 23 rebounds, a key to victory against a Mastodon team whose leading rebounder, Kpedi, averages 6.2 per game. The Norse outrebounded PFW 46-29, holding the Mastodons below their season average of 31.

“Give credit to those guys for making those plays, just giving us the momentum that we needed.” Faulkner said.

Warrick capped off a game-high 19-point performance with a three, much to the delight of the NKU fans in attendance. PFW leading scorer Jarred Godfrey was the only Mastodon to reach double figures, registering 11 points.

“Credit to the guards for looking up. They got me a bunch of transition, easy buckets, so that’s what got us going on offense.” Warrick said.

The Norse prevailed yet again thanks to their league-leading defense. For a team that allows 65.6 points per game, NKU held their opponents below that number for the sixth straight game.

NKU, winners of 14 of their last 16 games, advances to face Wright State in a rematch of the 2019 championship game. The Raiders beat top-seeded Cleveland State 82-67 behind 27 points and 11 rebounds from Grant Basile. The game will be broadcast on ESPN at 7 p.m.

“It’s always a war when we play them, and we expect nothing less tomorrow.” Horn said.