Defense prevails to send the Norse to Indianapolis 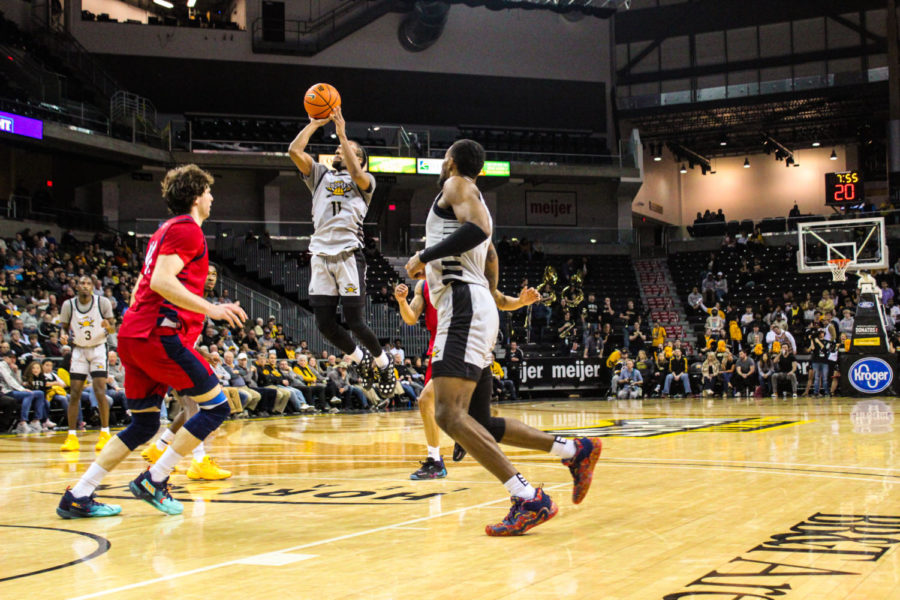 The men’s basketball team advanced to their fourth straight Horizon League tournament semifinals and fifth in six years, beating the Detroit Mercy Titans 77-59 on Thursday night. After getting swept in the regular season, the Norse emerged victorious by holding the Titans to 35 percent shooting, including 25 percent from three.

“On defense, I thought we guarded the ball better. We took away shooters better.” head coach Darrin Horn said.

Tonight’s meeting was also the third in tournament play. The Norse keep their postseason record against the Titans at a perfect 3-0, winning the previous two matchups 70-69 and 99-88.

Both teams came out shooting, as Detroit made two of three from beyond the arc. NKU countered by making their first three attempts, grabbing a 9-6 lead behind contributions from Sam Vinson and Marques Warrick.

The Norse were the more physical team early on, but could not convert on offense, converting just three of their first ten attempts. Detroit maintained their 50 percent shooting, going on a 7-0 run to take a two point lead.

After a flurry of points in the first four minutes, offensive ineptitude found both teams. Detroit Mercy went seven minutes without a made field goal, while NKU went 0-7 on field goals over a nine minute stretch. Trevon Faulkner reignited the Norse with a field goal, sparking an 18-8 run to end the half.

A Warrick crossover of Davis and a Vinson-to-Brandon alley-oop woke up the home crowd. Vinson, the Horizon League Freshman of the Year, was all over the court in the first half, leading the Norse with eight points and four rebounds. Chris Brandon finished off the half with a putback, giving the Norse a 10-point lead.

Carrying over their defensive performance from senior night against Youngstown State, NKU held the Titans to 21 first half points on 7-27 shooting. Davis, the Horizon League Co-player of the year, scored just four points on 1-8 shooting.

“To be a pest, that was my main job. To run my team and guard the ball, and I feel like I did a good job of that.” Langdon said.

Coming out of the locker room, swift ball movement kept the Norse in control, leading to a lay from Brandon and a three from Robinson. An all-around defensive effort ensured that Detroit did not close the gap to less than seven points.

When Brandon picked up his fourth foul with fourteen minutes left, Horn turned to Adrian Nelson. The senior big man responded with four points, three rebounds and a block, keeping NKU afloat in the post.

“I think one of the areas we’re much improved in, this year over last year, and we have so much more confidence in, is that position.” Horn said of his two big men.

After 15 first half points from Marques Warrick, the sophomore didn’t score again until there were 10 minutes left in the game. His basket was part of a 10-0 run that expanded the lead to 18 points.

Facing their largest deficit of the game, the Titans turned to Davis. The Horizon League’s all-time leading scorer tallied five points and one assist to bring his team within 14. Davis finished the game on just 1-7 shooting from three. His efforts were nullified by a Warrick four-point play to dampen Detroit’s spirits.

“It was a lot of emotion. The arena was loud. The crowd was with us all night.” Warrick said.

Nelson followed Warrick with an old-fashioned three-point play, and a technical foul on UDM head coach Mike Davis saw the lead balloon to 20 points at the final media timeout.

Warrick capped off another career night by hitting a free-throw line jumper as the shot clock expired late in the game. The sophomore continued his hot streak, scoring a game-high 25 points. He has now averaged 21 points over his last nine games. Faulkner and Langdon joined him in double figures with 13 and 10, respectively. Chris Brandon led the way with 11 rebounds as the Norse grabbed 36 boards to the Titans’ 27.

The Norse have now won 13 of their past 15 games dating back to Jan. 13. While Horn credits the players at the game level, he points to the administration for the program’s prolonged success.

“The commitment that our university has, through our leadership with President (Ashish) Vaidya, the support that our fans give us.” Horn said. “Coaches come and go, players come and go, but the team and the program is still good.”

The team’s success also has the players believing that they can continue to advance, not just in Indianapolis, but to the NCAA Tournament.

“I definitely think we have that ‘it’. Even the young guys, we started out slow, but I feel like we have guys that just want to learn and get better.” Faulkner said.

NKU will take on second-seeded Purdue Fort Wayne on Monday night in Indianapolis. All of the Horizon League semifinal action can be seen on ESPN2.

A historic season came to an end for the NKU women’s basketball team on Thursday night, falling to Cleveland State 59-51. The Norse made a late push, but could not overcome a double-digit deficit, trailing by as many as 19.

Kennedy Igo led the Norse with 12 points and Lindsey Duvall was not far behind with 11. In her final collegiate game, Grayson Rose registered eight points and ten rebounds.