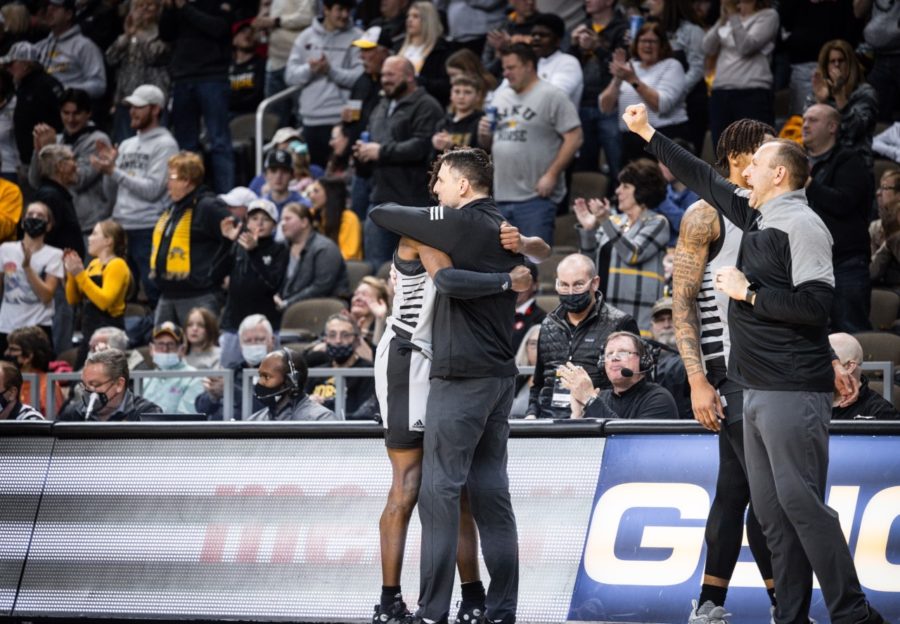 With chants of “David Wassler” raining down on the court for the entire game, the senior walk-on entered with one minute left to raucous applause, making his lone three point attempt as the men’s basketball team closed out Youngstown State 75-61 on Saturday night.

“It means the world. I wasn’t expecting to get in. I just wanted to see us win. But it couldn’t have ended any better than it did tonight.” Wassler said.

The win marks NKU’s tenth in their past eleven games against the Penguins, as they improve to 18-11 and 14-6 in the Horizon League. Youngstown State drops to 18-13, including a 12-9 conference mark.

The Norse ran out to a 16-9 lead behind 4-4 shooting from beyond the arc. Marques Warrick supplied three of the triples, registering 11 points in the first five minutes.

“His confidence is out the roof right now. He’s in a real good groove, and as teammates, we can’t do nothing but feed him the ball.” senior guard Bryson Langdon said.

Despite the hot start for NKU, the Penguins matched them offensively. William Dunn scored six early points, all from close range. After NKU knocked down two more triples to gain a five-point advantage, Youngstown State drained two of their own as the two teams matched each other basket for basket.

Neither team led by more than five until Langdon scored four straight points and Trevon Faulkner ended the half with a jumper to give the Norse an eight point advantage.

“It felt good, just going out there and playing with my boys. Just enjoying this moment and getting ready for the big dance.” Faulkner said.

The Norse registered their second best first half performance of the season, scoring 43 points on 50 percent shooting from the field and 75 percent from beyond the arc. Warrick led the way with 16 points on 4-5 shooting from deep. The sophomore has been on a tear lately, averaging 20.2 points over his last seven contests.

“We preach all the time, this game is about players making plays on both ends of the floor. That’s especially how you win at tournament time.” head coach Darrin Horn said.

Tevin Olison scored 10 points for the Penguins, who shot 56 percent from the field. Olison, who led the Penguins with 18 points in the first meeting, again had the team-high in scoring with 15 points on Saturday.

As they have done all season, the Norse defense clamped down in the second half. Behind 6-8 shooting and three Penguin turnovers, the Norse expanded their lead to 16 points in seven minutes after halftime.

Both teams entered the game with top five scoring defenses in the Horizon League. The defense certainly showed up in the second half as both teams went scoreless for over four minutes. Tevin Olison brokes the deadlock with a three pointer to cut the deficit to nine at 62-53. Despite the offensive struggles, the crowd implored the Norse to the finish line.

“Not only us on the court trying to uplift each other, but just having our fans there and seeing my parents there as well. Just knowing that we have to keep going.” senior Adrian Nelson said

Although it was Warrick leading the Norse in scoring, Langdon and Faulkner played a pivotal role in the final stretch of their final home game. Each tallied buckets to keep the Penguins at bay. Both reached double figures as Langdon scored 10 points and Faulkner 10. Freshman Sam Vinson rounded out the Norse players scoring in double digits, contributing 14 points.

To top off the night, Horn inserted Wassler with one minute left to the loudest applause of the night. After the final buzzer sounded, his teammates mobbed him on the court, capping off a combined 4-0 weekend for both NKU teams.

“He’s the most popular walk-on I’ve coached in 25 years in the business.” Horn said

Wassler was especially grateful to all the people who had gotten him to this point in his career, going so far as to write their names on his shoes. Those names include his friends from high school, his family, physical therapists and of course, his fans in Section 110.

With their twelfth win in fourteen games, the Norse earned a top-four seed in the Horizon League tournament for a fifth straight year. NKU entered the new year with a record of 5-7 but went 13-4 in the final two months to ascend the league standings.

“Our guys really started to acknowledge and accept who we need to be as individuals and how we need to play as a team to be our best.” Horn said.

Their opponent will be determined at the conclusion of the first round on Tuesday, March 1. The Norse return to the court for their tournament opener on Thursday, March 3 at 7 p.m.