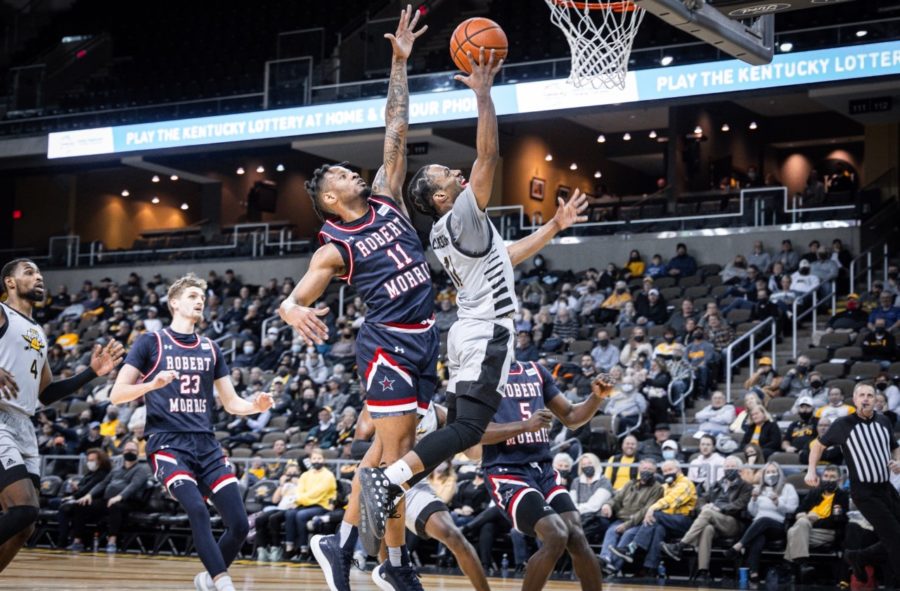 When the Northern Kentucky men’s basketball team fell to the Robert Morris Colonials 74-64 on Jan. 15, the Norse had reached arguably their lowest moment of the 2021-22 season.

In what was only the second Division I victory of the season for Robert Morris, the Norse shot 36 percent from the field and allowed 44 points in the paint, dropping to 2-4 in the Horizon League.

From that point on, the Norse have completely changed the trajectory of their season, rattling off 11 wins in their last 13 games following their 78-64 win over the Colonials on Thursday night at BB&T Arena.

“I think the biggest thing is that we have got a group now that understands who they need to be individually, and who we need to be collectively in order to play our best basketball and have our best chance to win,” head coach Darrin Horn said.

The Norse jumped all over the Colonials right away on Thursday night, connecting on six of their first eight field goal attempts before the first media timeout, taking a 16-8 lead just five minutes into action.

A 6-0 run by the Colonials cut the Norse lead to 20-14, prompting a timeout from Horn. Right out of the break, sophomore guard Marques Warrick splashed a three from the corner. Warrick scored a ridiculous 19 of NKU’s first 34 points, connecting on three pointers on three consecutive possessions in the middle of the first half.

With just under nine minutes remaining in the first half, Warrick’s 19 points had outscored the entire Robert Morris team.

Over NKU’s last 10 games coming into Thursday, Warrick averaged 17.6 points per game, highlighted by a 27-point effort in the Norse last game, a win at Oakland to secure the season sweep over the Golden Grizzlies.

Of course, it wasn’t just Warrick putting the ball in the basket with ease in the first half on Thursday for the Norse. Faulkner and Vinson had eight in the first half, and the Norse as a team shot 56.7 percent from the field. Warrick’s 20 first-half points paced all scorers, and put him just 10 points off his career-high of 30, set against Canisius in December.

The Colonials, for their part, did not struggle from the field either in the opening half, shooting 52 percent from the field and 45.5 percent from three. Unlike the first meeting between the two teams, the Norse kept Robert Morris in check from inside the paint. The Colonials had just 10 points in the paint in the first 10 minutes, a testament to the interior defense from NKU’s Chris Brandon and Adrian Nelson, among others.

An 8-2 run to begin the second half for the Norse, including a pair of dunks from Brandon and sophomore guard Trey Robinson, increased the lead to 54-33.

The Norse maintained a comfortable lead throughout the second half. A three by freshman guard Hubertas Pivorius stretched the lead to 26 points, 67-41, with just over 10 minutes remaining.

The second half saw the Norse rediscover the defensive intensity that they had displayed throughout their current hot streak.

In the time frame since the Robert Morris loss, the Norse have held their opponents to an average of 62.1 points per game. For the season, NKU has had the best scoring defense of any Horizon League team allowing just 66.1 points per game.

“Just knowing defense is really our thing to get us going,” Faulkner said regarding the difference in NKU’s play from that January loss to now. “When we stop them, it helps us get out in transition, so doing that and just trying to be as consistent as we can.”

An 8-0 run by Robert Morris against many of NKU’s late substitutions clouded the overall second half stats, but the Norse still held the Colonials to a lower field goal percentage in the final 20 minutes.

A putback basket by Warrick gave him 30 points on the night, tying his career-high and extending the Norse lead to an insurmountable 29 points with 5:51 remaining.

The substantial lead for the Norse allowed several players that have not logged many minutes this season to play longer, in particular forwards David Böhm, Seybian Sims and Noah Hupmann, as well as guard Isaiah Mason. And of course, senior forward David Wassler, who fans chanted for throughout the second half as the score got more lopsided.

A late run by the Colonials was not nearly enough to erase the deficit, as the Norse coasted to a 78-64 victory, improving to 17-11 overall and 13-6 in Horizon League play.

With the win, the Norse retained third place in the Horizon League standings with just one regular season game remaining. As the conference tournament draws closer, the Norse are doing their best to focus on what is in front of them and not allowing their emotions to run too high or too low.

“Just stay doing the little things, understanding what got us here and what it took, and just staying the course,” Faulkner said.

The Norse will host Youngstown State on Saturday night at 7 p.m. The game can be seen on ESPN+.