What a Bengals Super Bowl appearance means to the NKU community

Bengals play in their first Super Bowl since 1989 on Sunday 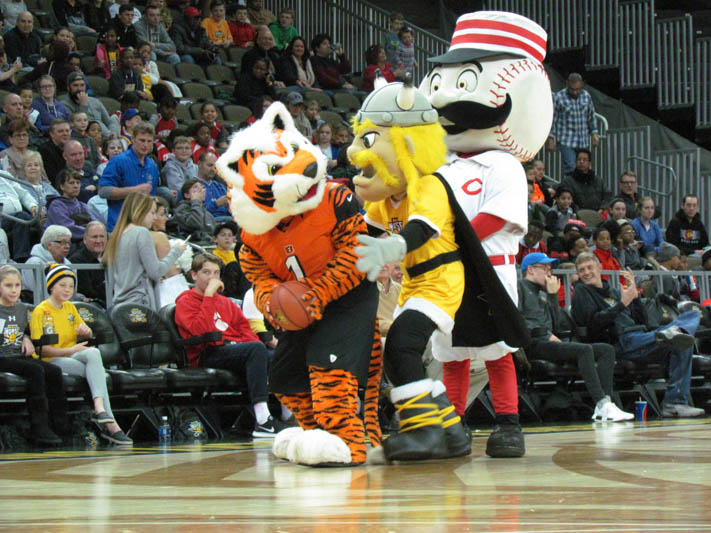 Victor E. Viking guards Who Dey in the mascot game at halftime of the NKU vs. Cleveland State game in 2017.

On Jan. 30, the Cincinnati Bengals made history defeating the Kansas City Chiefs 27-24 in overtime, thanks to a game-winning field goal by kicker Evan McPherson to advance to the Super Bowl. 34 years in waiting, this is something most NKU students have never experienced before. Lifelong fans who have experienced heartbreak after heartbreak, finally got rewarded.

“It was a special moment for us and we were going crazy,” Mastin said.

“I was born in 1999. I’ve heard plenty of stories from my family about how good those teams were (in the 80s), but since I was born we’ve had a lot of dark years with the Bengals,” Birdsall said. “My uncle is having a party for a bunch of our friends and family and I go there for every game so we can’t break what we’ve been doing since we’ve gotten this far.”

The Bengals have a very tough matchup in the Super Bowl. They take on the Los Angeles Rams at SoFi Stadium, which is the Rams home stadium. The Rams have arguably the best pass rush in the NFL with Aaron Donald and Von Miller, matching up with one of the worst offensive lines in the NFL in the Bengals.

With most sports personalities already writing the Bengals off, some seem to believe in the Bengals to finally get over that hump to winning a Super Bowl.

“My expectations are for an amazing game. I think we both have firepower offenses so I’m expecting a lot of points. If we protect Joe Burrow from Donald and Miller, we have a chance,” Mastin said.

Birdsall thinks the Bengals have what it takes to win their first Super Bowl.

“I believe the Bengals have a shot at it. No one really believed that they would make it this far and I’ve watched every game, and we have been in all of the games, but one or two. Our play was so inconsistent at the start of the year but they seem to be clicking at the right time and just need the offensive line to hold up against one of the best defenses in the NFL,” Birdsall said.

It has been a very long time since the city of Cincinnati has been on the national spotlight for one of their sports teams. Now, local business is booming due to people going out and watching the games at bars and restaurants.

Korbin Florer, an NKU Sports Business alum and who is now the Partnership Administration Manager for the Bengals, thinks the Super Bowl is a great thing for the organization and the city as a whole.

“There’s a lot of things both being in the Super Bowl and winning brings to Cincinnati. From the organization’s perspective, there’s a lot of added press and media attention on the team that trickles down to added pride and buzz in the city and surrounding areas. That can translate into more people watching the game on TV, listening to it on the radio, or even buying tickets to attend in person,” Florer said.

The Super Bowl is the largest sporting event in the United States every year, whether it be for the commercials it brings or just watching football, it is a good thing for the city and its businesses to get publicized.

“Bars and restaurants where people go to watch the game are likely to see an increase in revenue, Cincinnati becomes a bit of a destination for visiting team fans, and so many other ripple effects that people sometimes don’t consider,” Florer said.

Mastin who is also in the Sports Business club had the same thoughts as Florer, when it comes down to the business aspect for the city.

“It’s going to help a lot of Cincinnati businesses get more publicity as many people will research about Cincinnati. Players and reporters will talk about Cincinnati food items and clothing stores for millions of viewers,” Mastin said.

The Cincinnati Bengals take on the Los Angeles Rams in Super Bowl LVI in Los Angeles on Sunday, Feb. 13 at 6:30 p.m. The game can be seen live on NBC.