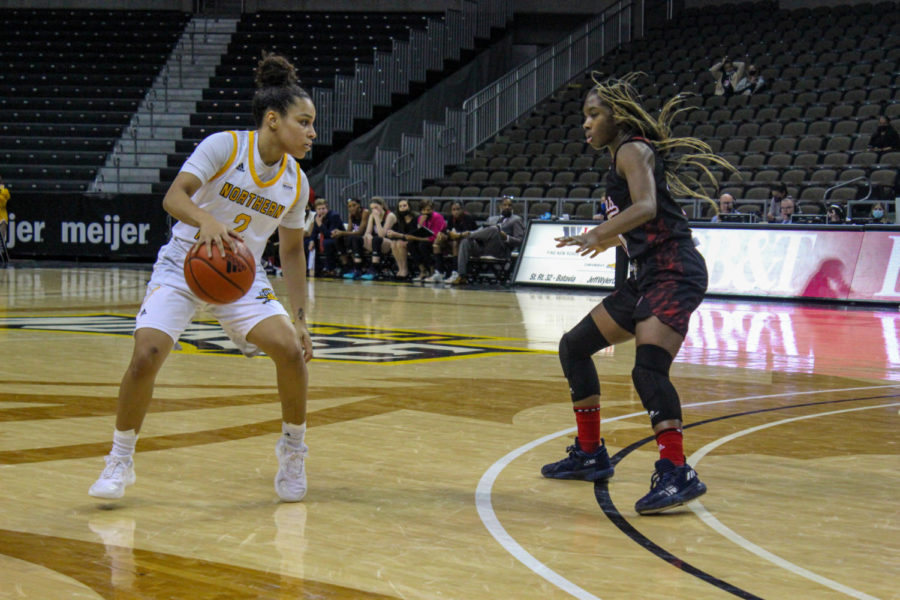 Lindsey Duvall returned to her scoring ways, tallying 28 points to lead the NKU Norse past the UIC Flames 67-57 on Thursday night. Coming off a career-high 22-point performance, Emmy Souder came up just shy of a double-double, registering 12 points and nine rebounds.

“Having my team be confident in me has really helped me have confidence in myself.” Souder said.

The Norse improve to 17-5 overall and 11-4 in conference, maintaining their best start to a season in the Division I era. UIC drops to 2-18 overall with a 1-14 mark in league play.

The contest started quickly for NKU as they recorded three steals in the first two minutes to gain a 4-2 advantage. UIC responded with triples from Jaida McCloud and Justice Gee to keep the game close. Nine first quarter points from Gee and 63 percent shooting from the field buoyed the Flames as they held a two-point lead after 10 minutes.

In addition to NKU’s early barrage of pilfers, Khamari Mitchell-Steen recorded three steals in the first half, surpassing her season average of 1.9. By game’s end, she tied a career-high with five steals.

UIC led by as many as four throughout the second quarter, but Duvall scored five of her 15 first half points to lead the Norse on a 12-4 run to take the lead. McCloud scored the final four points of the half for the Flames, finishing with a team-high 13. Gee added nine points and Kristian Young chipped in five as only three UIC players saw the ball go through the net.

Despite leading for most of the half, UIC trailed by only six at halftime, due in part to nine Norse turnovers.

“UIC does a really nice job, against everybody, of forcing turnovers. They’re one of the top in our league in that.” Whitaker said.

The teams combined for three turnovers and 2 for 9 shooting in a slow start to the second half. Luckily for the Norse, the two made shots were three pointers from Duvall and Grayson Rose. An Ivy Turner deep ball increased NKU’s lead to 42-27, their largest of the game.

The Flames didn’t get on the board until Gee sunk a pair of free throws halfway through the quarter, by which point NKU had built a 15-point lead. The charity stripe provided the majority of UIC’s scoring in the quarter as the Flames converted seven of eight from the line. Unfortunately, they failed to register a field goal until McCloud’s layup with eight seconds left, completing a quarter in which they shot 9%. The basket gave McCLoud her only second half points, as she finished with 15 total.

Due in large part to the Flames’ inaccuracy from the field, NKU outrebounded UIC 45-19, staying undefeated in games where they out-rebound their opponent.

“When things aren’t going great offensively or defensively, on those missed shots, it just gives you some peace of mind knowing we’re going to come up with the board.” Whitaker said.

Capitalizing on McCloud’s basket, UIC scored the first five points of the final quarter, highlighted by an and-one from Gee that brought the Flames within seven.

Keona Schenck scored all eight of her points in the final five minutes, but the Flames never got closer than a five-point deficit. A Duvall three and Mitchell-Steen breakaway layup extended the lead to 10 and NKU iced the game with seven made free throws.

In addition to McCLoud, Gee and Young were the only other Flames players to reach double digits, sharing the scoring lead with 16 apiece.

Each time NKU has faced adversity this season, they point to previous experience in order to stay resilient in their final stretch of games.

“Throughout the whole season, we’ve seen how, whether we win or lose, it has helped us for our games that come later on.” Duvall said.

Since UIC leaves for the Missouri Valley Conference at the conclusion of the academic year, tonight’s contest will likely be the last for the foreseeable future. NKU will miss the Flames, as the Norse hold an 11-2 series advantage, including a perfect 6-0 mark when facing off in Highland Heights.

As the Norse continue to battle for the Horizon League title, they face another tough test on Saturday, Feb. 12. League leader and preseason favorite IUPUI comes to BB&T Arena looking to avenge a Dec. 31 loss to the Norse. NKU will also celebrate their “Pink Game”, raising awareness for breast cancer. Tip is at 2 p.m. and can be seen on ESPN+.