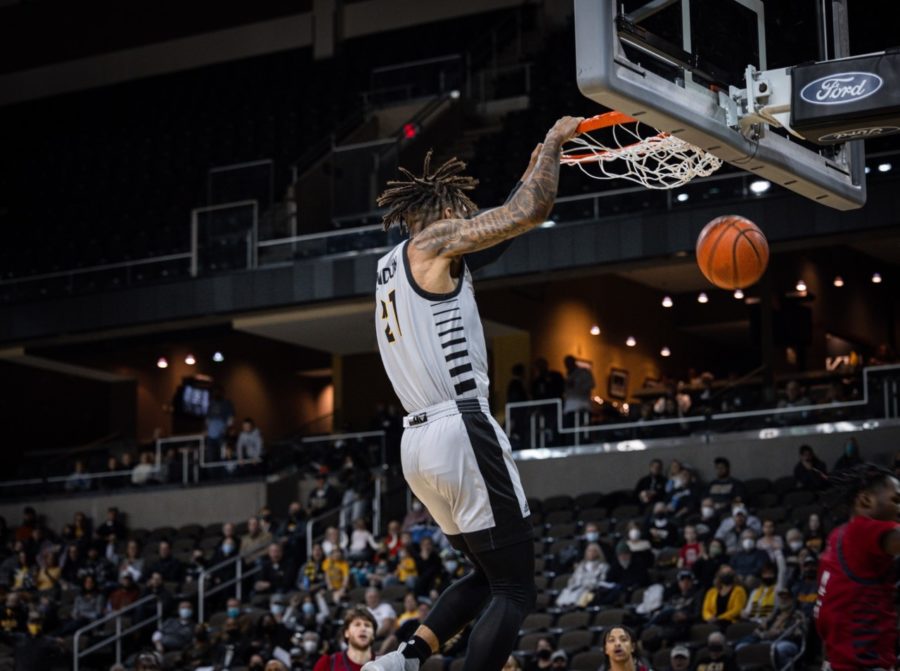 With both teams playing for the second time in as many days, the Detroit Mercy Titans came into BB&T Arena and defeated the Northern Kentucky Norse 74-68, snapping the Norse six-game winning streak. The Norse finished their five-game homestand with a 4-1 record and remained in fourth place in the Horizon League standings at 8-5 in conference play.

“This game went like so many of our games have gone, and the difference was we didn’t make the plays we needed to down the stretch in order to pull it out, which we found a way to do during the win streak, especially on the defensive end,” head coach Darrin Horn said.

Coming into the game, one of the main objectives for the Norse was to slow down Detroit Mercy guard Antoine Davis, the nation’s second-leading scorer entering play, averaging 23.5 points per game. The Norse succeeded in the first half, but Davis still ended up being a difference maker as the game wore on, leading the Titans with 19 points, including several clutch shots down the stretch.

The Titans opened up a 15-12 lead halfway through the first half, as a three from graduate guard Kevin McAdoo prompted an NKU timeout at the 10-minute mark.

Detroit Mercy, a team that takes a lot of threes and makes them at a highly successful rate, took 10 threes within the first 13 minutes. Four different players connected on a three in that time, pushing the Titans ahead 21-18.

For the Norse, senior guard Bryson Langdon, who entered the game with only eight threes in 41 attempts, connected on two threes in the first half. Along with senior guard Trevon Faulkner, who exploded for 26 points on Friday against Oakland, Langdon was crucial in keeping the Norse in the game during the first half, despite Detroit Mercy shooting 56.5 percent going into halftime.

Faulkner and Langdon scored 19 of the Norse’s 27 points in the first half. Freshman guard Sam Vinson and sophomore guard Marques Warrick were uncharacteristically quiet in the first half for NKU, as Warrick scored four points while Vinson was held scoreless.

While the Norse were able to keep Davis in check throughout the first half, holding him to only seven points, two other guards for the Titans – McAdoo and D.J. Harvey – combined for 16 points in the opening half, propelling the Titans to a 33-27 lead at the break.

A 9-2 run out of the break gave the Titans a commanding 42-29 lead before a Langdon and-one got the Norse back in the scoring column before the first media timeout.

Langdon connected on his third three of the contest with 15:09 remaining. Later, another and-one, this time by Warrick, cut the Detroit Mercy lead to 44-40 after the successful free throw with just over 13 minutes remaining.

With Davis on the bench, McAdoo and Harvey continued to keep the Titans scoring game afloat. At the second media timeout of the second half, the duo had combined for 26 points on 10-18 from the field.

But as they have continued to do throughout the second half over this homestand, the Norse fought back. A three by sophomore guard Trey Robinson cut the lead to 49-45, followed by a Chris Brandon dunk. With just under nine minutes left, Vinson got on the scoreboard for the first time, draining a three from the wing to put the Norse back on top, 50-49.

Much to the disappointment of Norse fans that made their way to the game for homecoming weekend at NKU, the Titans would answer in the ensuing minutes, first on a three from Madut Akec, then another triple from Matt Johnson.

Trailing 63-59 with 3:36 remaining, Robinson gave the Norse a spark, rising up and throwing down a one-handed dunk to bring the Norse back within two.

With the score at 65-62 within two minutes, Davis buried a three over Vinson’s outstretched hand, before Warrick subsequently knocked down a triple of his own, making it 68-65.

Down 70-65 with the clock winding down, Langdon buried a clutch three with a defender all over him to bring the Norse back within two with four seconds remaining.

But alas, that shot turned out to be too little, too late, as Davis and Akec went 4-4 on free throws in the final four seconds, sealing a 74-68 Detroit Mercy victory.

The Norse were able to hold Davis below his season average in points, but as one of the presumptive frontrunners for Horizon League Player of the Year, Davis made plays when it mattered most for the Titans, a huge reason why Detroit Mercy left BB&T Arena with a win on Saturday night.

“He did make some tough shots,” Langdon said about Davis. “The game plan was to get it out of his hands, and credit to his teammates for making tough shots as well.”

Faulkner led the Norse with 18 points, shooting 5-12 from the field. Saturday’s performance came on the heels of a 26-point, nine-rebound effort from the senior on Friday night.

“I think he’s playing with great pace,” Horn said about Faulkner. “He’s not forcing things, he’s under control, he’s got great balance on his shot right now, and he’s playing like you want a senior to play. And I think the bigger thing is he’s playing with such great poise right now on both ends. He’s been a calming influence, so to speak, in all of these games.”

Langdon and Warrick each posted 17 points, while shooting a combined 12-20 from the field. Brandon led the Norse with eight rebounds, though the Norse were outrebounded on the night, 28-21. For the Titans, Davis led the team with 19 points, while three players – McAdoo, Harvey and Akec – each posted 15 points.

As the Norse end their five-game homestand and prepare to embark on a five-game road trip beginning Wednesday at Milwaukee, the message in the locker room remains simple: keep working.

“The message would be just keeping our head up and coming to work on Monday, coming to prepare for Wednesday when we play again,” Faulkner said. “Just coming out playing hard and letting things take care of itself.”

Earlier on Saturday, the NKU women’s basketball team fell on the road at Cleveland State 59-56, dropping their record in Horizon League play to 10-4.

Trailing in the final minute, the Norse had multiple opportunities to either tie or win the game down the stretch, but were unsuccessful as a three by Carissa Garcia missed the mark at the buzzer, sealing a Vikings win.

As a team, the Norse shot just 37.9 percent from the field and 26.7 percent from three, but the Vikings posted worse marks, shooting 34.4 percent and 16.6 percent respectively. The Vikings got 29 points from their bench, led by Amele Ngwafang (14) and Deja Williams (13), while the Norse bench contributed only four points, all of which came from freshman forward Trinity Thompson.

The women’s basketball team will return home to BB&T Arena for a pair of games against Horizon League foes next week, hosting UIC on Thursday and IUPUI on Saturday.