Four in double figures lead the way in overtime thriller 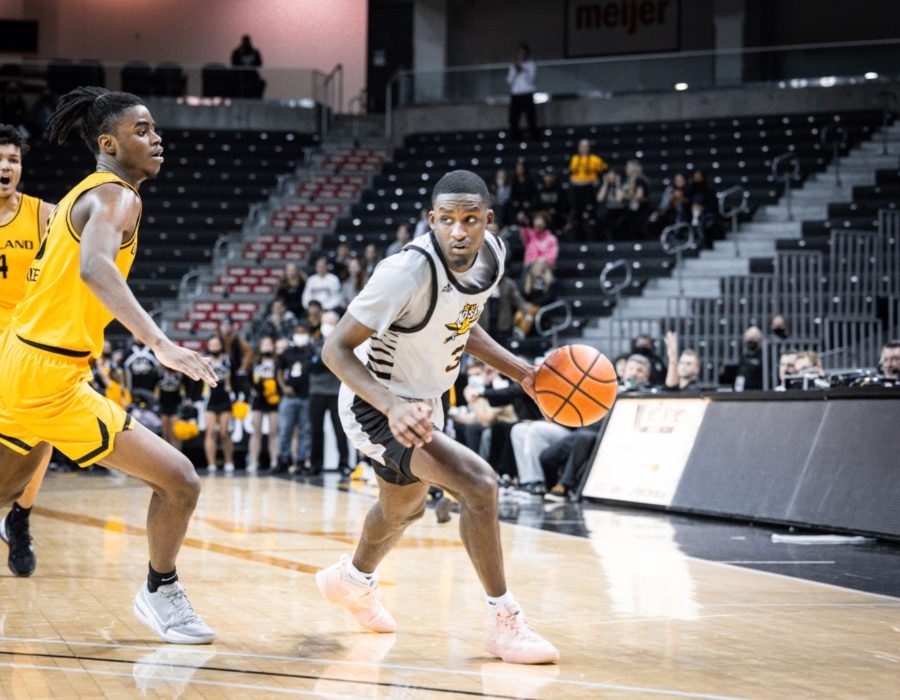 For the second straight game, the NKU men’s basketball team used a 14-point second half comeback to beat the top team in the Horizon League. Behind 26 points from Trevon Faulkner, 20 from Sam Vinson, and Chris Brandon’s 15-point, 13-rebound double-double, the Norse knocked off the Oakland Golden Grizzlies 87-78 inside BB&T Arena on Friday night.

“It’s hard to win back to back like that against two great teams.” Faulkner said.

Vinson got the game underway with a three, his only basket of the first half, but Jamal Cain provided an instant answer for Oakland. After a Marques Warrick three, a no-look assist from Bryson Langdon to Chris Brandon underneath the basket gave the Norse an early 8-3 lead. The lead wouldn’t last long, as Oakland used active hands and trapping defense to pressure the Norse, consistent for a team that leads the league in turnover margin. After ten minutes of play, the Norse had committed five turnovers.

A driving layup from Faulkner brought the Norse within one, but back-to-back threes from Jalen Moore and Osei Price expanded the Golden Grizzly lead to seven. For a team that makes about 30% of their tries from beyond the arc, the deep ball accounted for five of Oakland’s first seven field goals.

The Norse did not have the same luck from downtown. After hitting their first two three-pointers of the game, they missed their next twelve as Oakland’s lead grew to ten points. Faulkner broke NKU’s cold streak with a baseline jumper with six minutes left in the half.

The Norse waged two offensive battles in the first half. Even as NKU limited their turnovers with increased ball security, they were hampered by poor shooting late in the half. While the Norse shot just 29% from the field in the final 10 minutes, Oakland used a 11-4 run to open up a 38-24 lead. Cain and Moore, the Golden Grizzlies’ two leading scorers, each registered 10 points in the first half.

Brandon provided a late spark for the Norse, putting back a missed shot to beat the halftime buzzer. The basket gave him the team lead with seven points. Seniors Faulkner and Adrian Nelson each recorded six points in the first half.

Faulkner got the second half started with an offensive rebound and subsequent three-pointer. NKU scored the first seven points of the half, but still trailed by nine at the first media timeout.

“We’ve got some young guys that are really talented that impact our game and our team. But they’re still young, and sometimes it takes some time, offensively, to get in some flow.” head coach Darrin Horn said.

Minutes later, three empty possessions by Oakland led to eight straight Norse points. A fast-break layup by Brandon sandwiched in between two Vinson three-pointers brought the loudest cheers of the night as a furious comeback saw the Norse trailing by one. After an Oakland timeout, a steal by Vinson led to a Warrick layup, giving the Norse their first lead since early in the first half.

During the Norse’s 21-8 run, Oakland made just two of 10 field goals, both from behind the three point line. The Golden Grizzlies also committed four turnovers leading to seven NKU points.

Sophomore guard Jake Evans, while seeing 10 minutes of action, didn’t have a gaudy stat line- two points, one assist and one steal- but seemed to get his hands on every pass, igniting the Norse while disrupting Oakland’s offense.

“It shows everybody’s locked in and ready to do whatever to win the game.” Brandon said

Behind free throws from Faulkner and another fast break layup from Brandon, the lead expanded to five before Moore stopped the bleeding for Oakland with a straightaway three. Despite six straight points from Moore, NKU had an answer for seemingly every Oakland basket, holding no less than a four-point advantage over the final four minutes.

Over the course of their winning streak, the Norse are no stranger to late-game drama. Leading by four, a missed free throw by Brandon set the stage for a cardiac-inducing final 30 seconds.

Vinson fouled Micah Parrish on a three. He made all three foul shots to bring Oakland within one.

After getting fouled, Langdon missed the front end of a one-and-one, giving Oakland a chance at the win.

Price missed a jumper, Faulkner grabbed the rebound and got fouled with five seconds left. He converted both shots to give the Norse a three-point lead, but NKU failed to guard Moore, who hit his fifth three of the game as time expired to send the game into overtime.

“We felt like we could do a good job of keeping (Moore) in front and not letting him get too far.” Horn said of his rationale not to foul.

Facing their second overtime game in two weeks, Faulkner made sure the Norse didn’t fall behind early like they did against UIC, starting the extra period just as he did the second half, draining a three. The senior scored 20 of his game-high 26 points after halftime, sinking 12 of 13 free throws in the process. All three of Oakland’s overtime field goals came from behind the arc, but it was not enough as the Norse stepped up with one big play after another.

Vinson capped his night with a three from the wing. Langdon grabbed his own miss and got fouled, converting both free throws. Brandon stuck back yet another missed shot to extend the lead to six. Langdon came up with the clincher, stealing the ensuing inbounds pass to seal the game.

“Collectively through the season, we’ve been building towards that. Everybody stepping up to the plate when the time comes.” Brandon said.

Clinging to their last hope, Moore brought the ball up the court for the Golden Grizzlies, but was called for traveling. Head coach Greg Kampe disagreed with the call, receiving two technical fouls with 6.8 seconds left in overtime. Giving NKU four free throws and the ball sealed the deal on yet another signature win for Horn’s squad.

“I think resilient is the biggest word.” Horn said. “We’ve kind of developed this fighter’s mentality where we just keep playing.”

On a night where Cain fouled out after scoring 12 points and surpassing his rebounding average with 14, Moore stepped up for the Golden Grizzlies. The junior had a team-high 24 points, but only three in overtime. Parrish also reached 20 points, a season high for the freshman.

Because of severe weather in the Cincinnati area, the Norse will return to the court less than 24 hours later, facing Detroit Mercy and the Horizon League’s leading scorer, Antoine Davis. The contest will tip at 7 p.m., and can be seen on ESPN+.