‘The bigger the moment, the better he is’, Warrick shines as Norse win rivalry game over Wright State 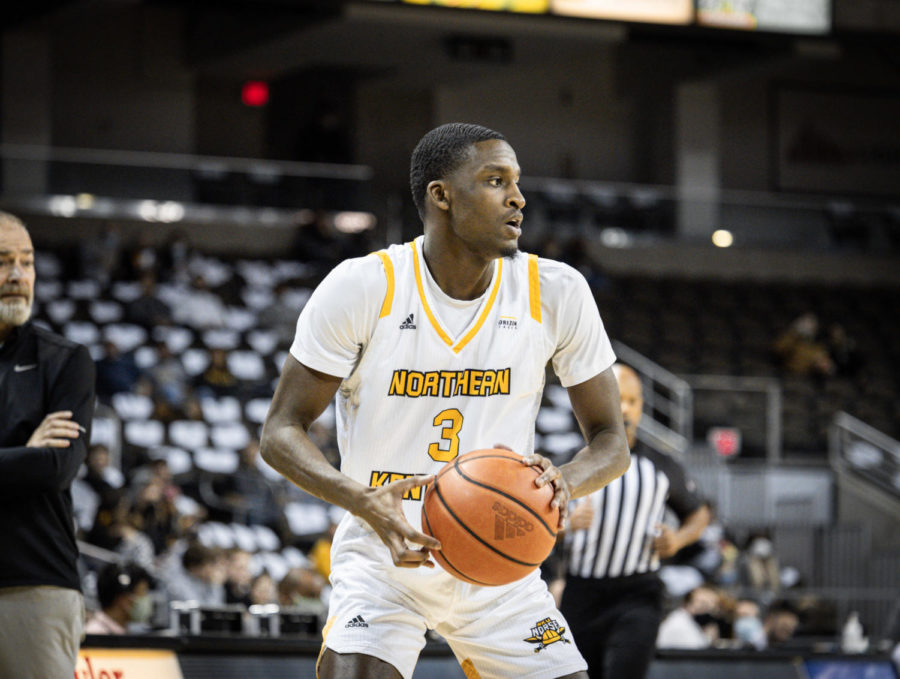 “The bigger the moment, the better he is.”

Indeed, the bigger the game for the NKU men’s basketball team, the better Warrick seems to play. It was obvious in his first collegiate game against Ball State last season, the Horizon League Tournament quarterfinals against Detroit Mercy last March, December’s win over Canisius to snap a four-game losing streak, and of course Tuesday’s performance in which Warrick led the Norse with 23 points, and connected on nine of his 16 field goal attempts, just to name a few examples.

“It started really early for me, back in high school, a lot of close games, a lot of game winners in high school,” Warrick said. “Being one of the most impactful players on the team, that’s one of my responsibilities, I’ve got to step up when it comes down to it, so I love the moments.”

Without Warrick’s 23 points, the Norse don’t walk out of BB&T Arena with a massive victory over their Horizon League rivals, but Tuesday’s win was much more than just a one-man show for the Norse.

“A total team effort against a really, really good Wright State team, a team offensively that is extremely dangerous,” Horn said. “We’re glad to have the win, and maybe more importantly, we’re glad that we’re starting to play the way that’s going to give us a chance to win every night.”

The Norse got out to a blazing start, knocking down five of their first six field goals to take a 10-2 lead as the Norse faithful were still finding their seats at BB&T Arena.

Throughout the next 10 minutes, the Norse continued to build on their substantial lead, as a plethora of Norse got into the scoring column, led by Warrick, Langdon and Robinson with four apiece.

A three by Hubertas Pivorius stretched the Norse lead to 35-24, in what would ultimately be the final points NKU would score in the first half.

Up 11 at the under-four media timeout, the Norse proceeded to go on a scoring drought spanning the final 3:38 of the first half, allowing Wright State to pull within one at the break, 35-34. While the Norse never trailed in the first half, the momentum going into the locker room was clearly shifting toward the Raiders, a team that entered the game 8-2 in conference play and fresh off a 97-point offensive explosion against UIC.

The Norse had seen this script before, just 24 days prior at BB&T Arena against Milwaukee. Up 17 points against the Panthers in the second half, the Norse would squander that lead, eventually losing to a Milwaukee team that was missing its most impactful player, freshman phenom Patrick Baldwin Jr.

On Tuesday, the Norse were not going to let history repeat itself in front of an electric crowd against their close rivals.

A back-and-forth second half had the look of a game that could potentially come down to the final minute, perhaps even the last possession. Warrick and Wright State guard Tanner Holden continued to keep their teams afloat, with Warrick scoring 14 of his 23 points in the second half, Holden 11 of his 22.

A jump shot by Holden found the bottom of the net with 5:20 remaining in the game, evening the score at 61.

Averaging 20.6 points per game entering the contest, Holden would not score for the remainder of the evening.

Instead, it was a pair of Norse guards, Vinson and Warrick, that were the difference makers in deciding the outcome on Tuesday.

Five consecutive points by Vinson, including an enormous three with 4:30 remaining gave the Norse a 66-61 lead, an advantage that they would not relinquish. Almost three minutes later, Warrick delivered the dagger, burying a three with 1:19 remaining, sending arguably the most raucous crowd of the season for the Norse into a frenzy.

“We’re learning the things that you have to do to not let the game get away from you, or in tonight’s case, close it out at the end,” Horn said.

For Vinson, who shot an uncharacteristic 0-5 from the field in the first half, including 0-3 from long range, focusing on the next play each time down the court was crucial in his second-half resurgence.

“No matter how you’re playing, you’ve always got to think ‘next play’ and that’s what we preach is next play,” Vinson said. “No matter what you’re doing, you want to just keep on pushing and always believe in yourself.”

As a team, the Norse collected 11 steals, forced the Raiders into 16 turnovers, and perhaps most importantly, held the Wright State frontcourt duo of Grant Basile (17.9 PPG) and A.J. Braun (7.6 PPG) to just 13 points total, a testament to their defensive intensity in the post, including from Nelson and Brandon.

“We kind of wanted to do our best to try to take away something, and the inside was a big focus for us, and fortunately we were able to do a good job of that tonight,” Horn said.

As the Norse continue on their five-game homestand with another tough game on Friday against Purdue Fort Wayne, a team they soundly lost to in December, the belief around the team is that the Norse are finding a rhythm at the right time, just as a crucial part of the schedule rolls around.

“Three in a row now, we’re not going back down, we can’t go back down,” Warrick said. “Ever since the loss against Milwaukee, we took a step down, but we’re just getting started.”