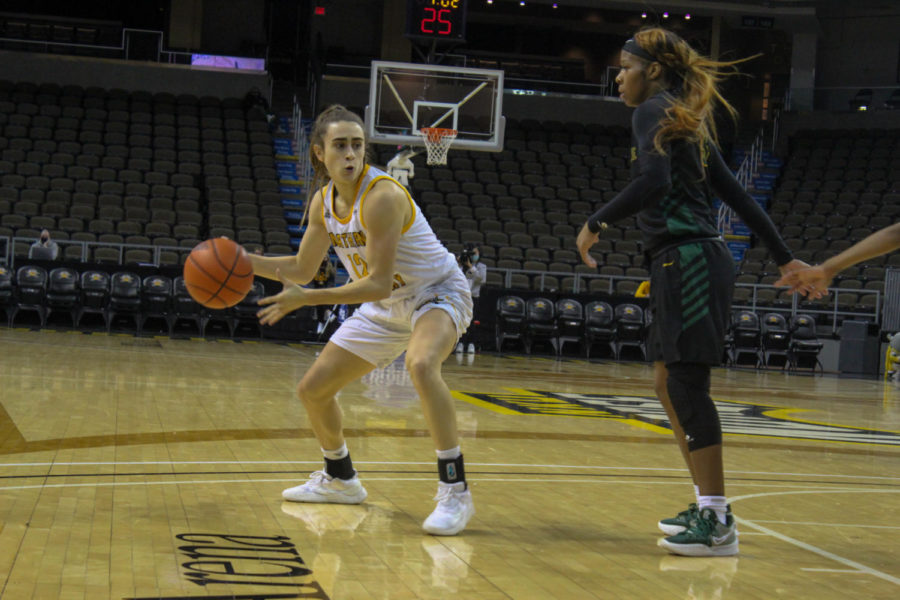 After 43 days away from the home court, the NKU women’s basketball team returned to BB&T Arena to face their rival Wright State. Paced by 23 points from freshman guard Khamari Mitchell-Steen, the Norse downed the Raiders 77-59 to improve to 12-3 overall and 6-2 in conference play. Wright State drops to 2-13, including a 1-9 league mark.

“I decided I needed to step up for my team because everybody’s not going to have a good game.” Mitchell-Steen said.

Wright State started the game making five of their first six field goals, using their size to drive into the paint and convert from close range. Trailing by four, the Norse regrouped to go on a 6-0 run as the Raiders missed four straight field goals. A back-and-forth quarter saw the Raiders outshoot the Norse, but the score was even at 17 after 10 minutes.

The Norse responded in full force to open the second quarter, firing off an 11-2 run behind seven points from Mitchell-Steen. With the Norse leading comfortably late into the half, Diamond Stokes was whistled for an intentional foul for elbowing Turner in the face. Two ensuing Carissa Garcia free throws pushed the lead to 10 before an 8-5 Raider scoring run brought the halftime score to 42-35.

The Norse shot 53% from the field in the second quarter and sank two of three from deep. Despite Turner missing the final three minutes of the half, she and Mitchell-Steen both reached double figures, scoring 11 and 10 points, respectively. Wright State saw contributions from seven different players, with Jada Roberson leading the way with eight points and five rebounds.

Opening the third quarter, Wright State continued to battle, capitalizing off of six straight missed shots by the Norse to draw within four points. An extended 12-5 run behind scrappy offense pulled the Raiders within three points with three minutes left, but three pointers from Duvall and Mitchell-Steen kept Wright State from finding an equalizing basket.

“They’re a really physical team, and that’s one of their best attributes.” Duvall said.

Similar to the second quarter, the Norse shot 53% from the floor. Although they entered the final period leading by eight, NKU ran out to a 75-55 lead almost in the blink of an eye. The Norse exploded on a 15-2 run over a five minute span to put the game away.

“We didn’t change our game plan at halftime. We came out with the exact same game plan that we had going into the game. The kids just decided to play defense.” Whitaker said.

The run saw balanced scoring, but on the defensive end, NKU limited Wright State to one field goal and forced three turnovers. The Norse stole 10 Raider passes, with four coming from Mitchell-Steen

“In the past seasons, Ivy’s always guarded the best player on the other team for us. But now, we’ve got two that can really lock in.” Whitaker said.

Mitchell-Steen stuffed all categories of the stat sheet, grabbing seven rebounds and blocking three shots. Duvall recorded her sixth double-double of the season, registering 17 points and 13 rebounds. Turner matched Duvall with 17, Garcia contributed eight, and freshman Kailee Davis chipped in six points to round out a guard-heavy performance from the Norse.

“It’s so nice that (Kailee and Khamari) have Lindsey and Ivy and Carissa and the other upperclassmen to learn from.” Whitaker said.

As far as history goes, the last Norse performance with three players scoring 15 points was not too long ago. Garcia, Turner, and Duvall all surpassed the mark on Dec. 20, 2021 in a road contest against Wofford.

In a weekend of contests similar to the 2020-2021 schedule, the Norse and Raiders will face off a second straight time as the two teams make the drive up I-75. Saturday’s contest takes place inside the Nutter Center at 4 p.m., and can be seen on ESPN+.

Men’s basketball takes down UIC on the road

Behind 24 points from Sam Vinson and 19 from Marques Warrick, the NKU men’s basketball team started the second leg of their four-game road trip with a 74-70 overtime win over UIC. After trailing for the majority of the game, the Norse scored the final four points in regulation, capped by a Warrick three pointer with one minute left.

Damaria Franklin led the Flames with 17 points, but it was Filip Skobalj scoring UIC’s five points in overtime. Down five just two minutes into the extra period. Warrick and Vinson scored all nine of the Norse’s overtime points to secure the victory. Complimenting the two leading scorers was Adrian Nelson. The senior big man once again just missed a double-double, amassing 11 points and eight rebounds.