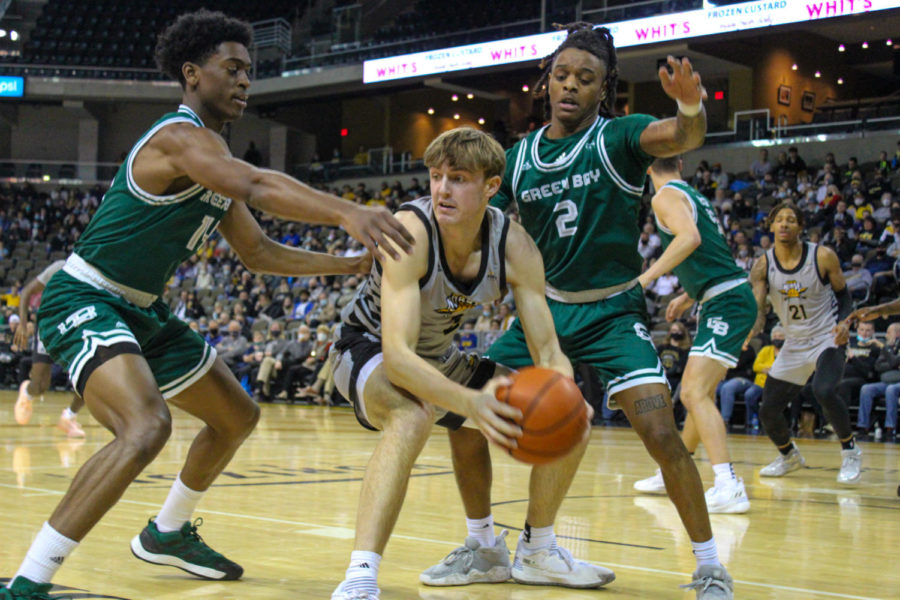 Gallery|10 Photos
Matthew Dietz
NKU guard Sam Vinson is double-teamed near the baseline on Thursday against Green Bay. The Norse came away with the 79-74 victory.

The NKU men’s basketball team got their first Horizon League win on Thursday night, defeating the Green Bay Phoenix 79-74. The Norse improve to 5-7, while the Phoenix drop to 2-10. With identical conference records at 1-2, both teams join a host of others in the middle of the league standings.

Despite playing without Adrian Nelson and Seybian Sims, the first five NKU field goals came from five different players. The scoring diversity was not unique to the Norse, as Green Bay saw baskets from six different players, using a 10-0 run to take a seven-point lead in the process. The Phoenix eventually stretched their lead to eleven, but head coach Darrin Horn did not let that deficit dampen his team’s mood.

“Our guys didn’t seem to flinch. They didn’t get worried. They didn’t lose confidence. We just kept playing.” Horn said.

In addition to an even scoring attack from Green Bay, the official’s whistle was not kind to the Norse. NKU was tagged with 13 first half fouls, with Green Bay converting 12 of 16 first half free throws.

A 8-2 scoring run fueled by six points from sophomore guard Marques Warrick allowed the Norse to close the gap, but they entered the locker room trailing 38-33. Warrick had eight first half points and sophomore guard Trey Robinson contributed seven. In his first start of the season, junior forward Chris Brandon grabbed eight rebounds.

“He had a really nice night. I think he gives us an element athletically when he’s out there that’s different than anything else that we have.” Horn said

Green Bay shot 48 percent from the field and was led by nine points each from Kamari McGee and Japannah Kellogg III.

Northern Kentucky started the second half with a fire in their eyes, taking a 41-40 lead behind threes from Warrick and senior guard Trevon Faulkner. Even with five ties and lead changes early in the half, the ball started to bounce the Norse’s way.

“We just got to get better at completing the whole game and playing a whole 40 minutes.” Faulkner said.

A Northern Kentucky team that averages 10.5 steals per game only snatched four Phoenix passes, but all four came in the second half, allowing the Norse to open up a lead that grew to as many as seven.

Seeing his first extended action of the season, freshman Isaiah Mason scored all four of his points in quick succession, giving the Norse a lead they would not relinquish.

“Big stuff from Isaiah off the bench.” Warrick said.

Despite neither team leading by more than five for the majority of the half, Warrick converted a hook shot with less than a minute left to give the Norse a four-point advantage. He then grabbed a key defensive rebound, got fouled, and converted both free throws to seal the win for NKU.

On the season, Northern Kentucky has taken 116 more three-point attempts than their opponents but have converted at a higher rate. The Norse outshot the Phoenix from behind the arc 36 percent to 30 percent, largely helped by a 4-for-9 effort in the second half. Despite the affinity for the outside shot, Warrick and Faulkner stressed the importance of beating their opponents at the rim.

“We tried to take advantage of some (matchups) tonight based on how they were matching guys, but the bigger thing was getting them in spots where they’re comfortable.” Horn said.

Warrick tallied his fourth 20-point performance of the season, Faulkner wasn’t far behind with 19, Sam Vinson had 11, and Robinson reached double figures with 10 points. Brandon finished just shy of his first Norse double-double with eight points and 11 rebounds before fouling out.

“Everybody came and did what they were supposed to do, and that’s what helps us win.” Warrick said.

Thursday night was the third time NKU scored more than 70 points against Division I competition. All three occasions have resulted in wins (Canisius, Eastern Michigan).

As the Norse turn the calendar to 2022, Horn outlined what they need to do to be successful going forward.

“This is a team that has to play aggressive, has to play with confidence.” Horn said. “We’re not going to be the biggest team, we might not be the most athletic team. But we feel like we’ve got enough pieces and enough depth when everybody plays and performs like they did tonight.

The Norse continue their five-game home stand and ring in the new year on Saturday, Jan. 1 against the UW-Milwaukee Panthers. Tip is set for 2:00 p.m. and can be seen on ESPN+.