NKU was led by guards Vinson, Warrick on Sunday 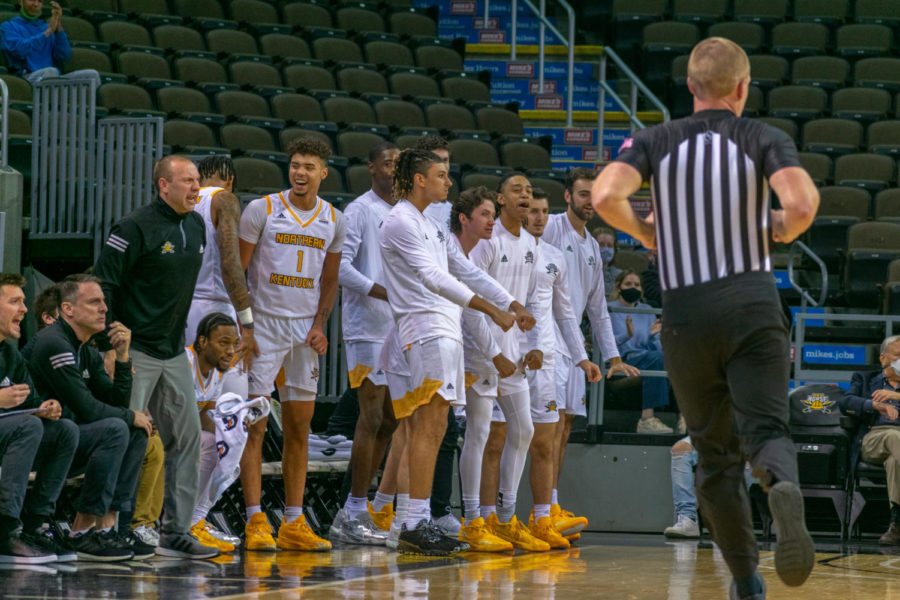 The NKU men’s basketball team celebrates during a win over Wheeling on Nov. 9.

The Northern Kentucky men’s basketball team dominated both sides of the ball on Sunday at BB&T Arena, capping their brief two-game homestand with an emphatic 91-55 victory over the Alice Lloyd College Eagles.

“We talked to our players coming into this game about the importance of trying to play to our standard, and play the right way and to keep getting better,” head coach Darrin Horn said. “We feel like we’re starting to make some progress as a team and we wanted to build on the Canisius win on Wednesday.”

The Norse got out to a quick start to open the game, connecting on six of their first eight field goals to jump ahead 16-4 within the first five minutes. Sophomore guard Marques Warrick, who recorded a career-high 30 points against Canisius on Wednesday, led the early charge with 10 of NKU’s first 16 points.

After a free throw from sophomore guard Trey Robinson and a fast break dunk by freshman guard Sam Vinson to stretch the score to 19-4, the Eagles began to chip away at the commanding Norse advantage. A 10-2 run, led by sophomore guard Ben Soumahoro, brought Alice Lloyd within five at 22-17.

The Norse responded however, breaking off a 16-6 run over a six-minute span, connecting on five of six field goals during that run, including a pair of threes from senior guard Trevon Faulkner and Vinson.

NKU’s defensive intensity seemed to increase substantially past the midpoint of the first half, as the Norse forced 13 Eagle turnovers in the first 20 minutes, leading to 19 points. Additionally, NKU outscored Alice Lloyd 12-0 on fastbreak points, culminating in a 45-27 lead at the break.

Warrick led all scorers with 12 first half points, while also picking up three rebounds, three assists and four steals. Vinson stuffed the stat sheet in a similar way in the first half, scoring nine points with a team-leading four assists.

Consecutive threes by Vinson to open the second half gave him 15 points on the day and pushed the Norse ahead 54-31. A 13-5 run early in the second half by the Norse put them ahead 61-33, and effectively ended any hope that the Eagles had of coming into BB&T Arena and escaping with a win over their Division I counterpart.

NKU was able to find much more success shooting the three in the second half, connecting on eight of their first 14 attempts, led by freshman guard Hubertas Pivorius, who splashed in three treys in his first five minutes of action. As a team the Norse took 45 three point attempts on Sunday, the highest single-game total in school history.

Pivorius was one of several Norse players, including sophomore guard Jake Evans and junior forward Seybian Sims, that saw extended action off the bench in the lopsided affair. Horn has talked about wanting the team’s depth to be a strength this season, with more of a balanced scoring attack throughout the roster. Six players scored in double-figures for the Norse, while the team got 40 points from the bench on Sunday.

“It’s really important. We need the starters and we need the bench, everybody on the team to come in and play their game and play as a team,” Vinson said. “That bench scoring, that’s incredible and I just think we try to push it, we try to get out in transition and run and that led to more points today.”

Pivorius finished with 15 points, all of which came in the second half off of three-pointers, accenting the impressive shooting that he has demonstrated already this season, including against Western Illinois when the freshman poured in 20 points.

“I think he’s a guy that can definitely still be someone that gets in the game for us, and helps us on given nights, and do exactly what you saw him do today,” Horn said about Pivorious.

On the defensive side, the Norse forced Alice Lloyd into 26 turnovers for the game, while collecting 21 steals, led by Warrick with five and Vinson with four.

“Defense is one of the biggest things my coaches tell me to get better at, just effort, mentality on the defensive end,” Warrick said.

Vinson tied a career-high on Sunday with 17 points, while also collecting five rebounds, five assists and four steals. The freshman guard was 4-7 from three as well. Pivorius was second with 15 points, while Warrick pitched in 12 to go along with five assists.

“One of the things that’s really helping Sam, is since we made the lineup change where we’re getting him off the ball some as well, I think that has taken a little bit of the stress and pressure of handling it all the time off of him,” Horn said. “He seems much more comfortable catching and shooting from the perimeter, he’s shooting the ball much better.”

In the final minutes, David Wassler, a senior walk-on for the Norse, checked into the game after fans chanted for him to enter, and promptly drained a three with just over a minute remaining, sending the BB&T crowd into a frenzy.

“It was so fun, it just felt great, just to be out there,” Wassler said.

The Norse will hit the road once again for the next several weeks, beginning with a game at Eastern Kentucky on Dec. 18, before arguably their most high-profile non-conference game in several years on Dec. 22 when they travel to Bloomington to battle the Indiana Hoosiers. Both games are scheduled to tip-off at 7:00 p.m.