Too little, too late for Norse 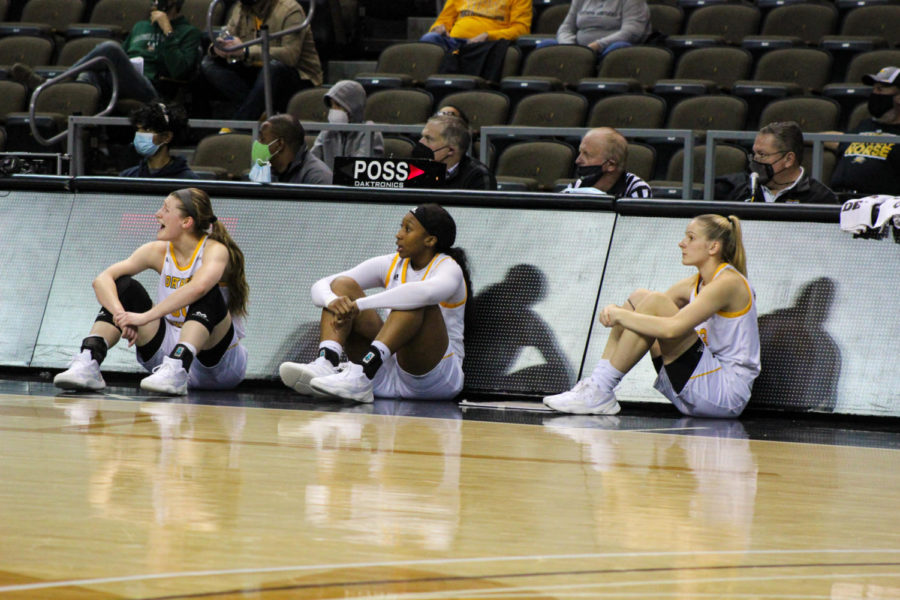 Gallery|11 Photos
Matthew Dietz
A trio of NKU players wait to check in to the game on Friday night against Cleveland State.

The Northern Kentucky women’s basketball team fell to Cleveland State 63-52 on Friday night at BB&T Arena. The Norse faced a tall task as the Vikings entered not only with an unblemished record, but also lead the Horizon League in scoring and are third in scoring defense.

On ‘ugly Christmas sweater night’, the Norse were fueled by five early points from Ivy Turner, who was coming off a career-high 24 against Central Arkansas. The Vikings quickly responded, keeping the game close by forcing six Norse turnovers in the first quarter. NKU held a one-point lead after ten minutes by way of an Emmy Souder layup at the buzzer off an assist from Lindsey Duvall.

NKU opened the second quarter behind a three pointer from Rose, giving the Norse a four-point lead. Just as they did in the first quarter, Cleveland State clawed their way back, scoring from the free throw line and in the paint. A dominant first quarter from Rose caused Cleveland State to change their game plan, often drawing her into the high post to open up the paint.

“I just try to do whatever I can for the team,” Rose said.

Behind free throws from Duvall, Turner, and Souder, NKU closed their halftime deficit to 33-29.

“Whatever I got to do to try and get the win. Whether that’s playing post, or guarding the best player for 40 minutes, I’ll do it”, Turner said.

Neither team scored for the first two and a half minutes before Souder made a turnaround layup to break the stalemate. In a sequence filled with turnovers and sloppy play, Cleveland State found five points, forcing a Norse timeout after Leo’s third three pointer of the night.

As the quarter progressed, the Vikings displayed their league-leading defense, as the Norse shot just 20 percent on three made field goals in the quarter. Both teams struggled on offense, but the Vikings outscored the Norse 14-9.

“We just didn’t execute offensively like we should have.” Turner said.

Facing a nine-point deficit, NKU began the fourth quarter with a passion. Behind layups from Souder and Rose and an and-one from Turner, the Norse closed the gap to two points in less than two minutes.

“We’ve got to play with pace. That’s when we’re at our best, is when we’re getting stops and transitioning to try to get some easy baskets”, Whitaker said.

A pull-up jumper from Duvall eventually tied the game at 49 and finished off a 11-2 Norse scoring run. Ivy Turner responded to a Viking basket by stealing the ball and dashing down the court for a layup. A torrid pace saw two ties before Leo gave the Vikings the lead for good, scoring six of her game-high 31 points in 43 seconds. In a battle of the top two scorers in the Horizon League, Leo got the better of Duvall, who finished with 11 points.

“There’s a lot of pressure on her defensively,” Whitaker said of her senior guard. “I know that she’s going to keep working, and she’ll bounce back.”

In a losing effort, Grayson Rose secured her second double-double of the season with 11 points and 10 rebounds. She also blocked two shots, moving her into second place in program history.

Despite the loss, Whitaker knows her team has the potential to win close games like this one because of their attitude as a whole.

“These players, win or lose, are so fun to coach. It makes it easier to take the losses because you know they’re giving you everything they have” Whitaker said.

The Norse return to the BB&T Arena court on Sunday, Dec. 5 against Purdue-Fort Wayne. Tipoff is set for 2:00 p.m, and can be seen on ESPN+.