A bond beyond the field: How Wilmes and Vogt became closer through soccer 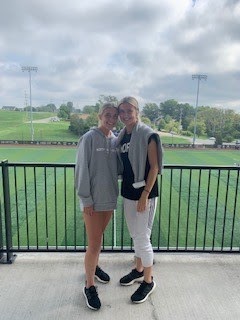 Vogt (Left) and Wilmes (Right) have formed a bond together through NKU women’s soccer.

There is no doubt that Northern Kentucky athletics scored big when getting the commitments of highly touted sophomores Sofia Wilmes and Kaya Vogt in the 2020 recruiting class for women’s soccer. In their first season with the team, Wilmes, a forward and Vogt, a midfielder, were both named to the Horizon League All-Freshman team and helped the squad to a conference finals appearance.

The immense impact of these two players does not go unnoticed either. Head coach Bob Sheehan raved about the young stars.

“Despite playing opposite sides of the play, the tremendous skill they have at their respective positions translate to great success for the team, Sheehan said.”.

Coach Sheehan dove deeper into the skills they both possess saying “Kaya’s an extremely technically defender who can win balls and beats defenders.” “Sofia’s speed and ball control allows her to win 1 on 1’s and be a very effective scoring forward”

Despite these great things, Wilmes’ and Vogt’s careers did not get off to the best of starts. However, that is what led to their powerful and impactful relationship that has excelled the team as a whole. A relationship blossomed between the pair early on in their freshmen season as they found common ground in struggle and unforeseen obstacles.

For Wilmes, she faced the challenge of climbing a well versed and talented depth chart as a young freshman. Vogt on the other hand found herself on the injured list early on in the season.

The duo decided to face their challenges as one and push each other to get better one day at a time. Through this, they began to share a unique bond and friendship in the work ethic they shared and hardships they faced..

When asked why their relationship translates to on the field success so well. Vogt simply answered, “because we want the same things”.

Every day they are working as one to be better. They share a common love for the game and not only make goals for themselves but each other. For Wilmes and Vogt, soccer is everything and they push each other constantly because they see the endless potential in each other.

Whether it’s hyping one another up or picking up one another off the ground, they always believe, encourage, and trust in each other.

A glowing example of this was when they spoke about the strengths and improvements they have seen in each other since being teammates.

“Sofia is a great forward, and her ability to learn quickly and get better every day is one of a kind,” Vogt said.

When asked about Vogt, Wilmes said “the physicality Kaya brings is infectious and her knowledge of where to place a ball makes my job much easier”

The two are constantly talking soccer and getting in extra practice together off the field as well.

“We are always texting about games, practices, and what we could be improving on, as well as actually practicing together in our free time to stay sharp,” Wilmes said.

The persistent dialogue these two have about soccer leads to their exceptional chemistry on the field.

“It leads to us knowing where one another is going to be on the field and even being able to hear each other over everyone else in games,” Vogt said about the implications doing these things has on the duo’s success.

Having now completed their sophomore seasons, the two are much more comfortable and used to what being a Northern Kentucky athlete calls for. However, that doesn’t mean they haven’t had to face challenges this year as well.

One such new challenge was adjusting to a longer season. Although that is something both players were excited about, it meant more physical demand on their bodies than last season.

Due to COVID-19 their freshman seasons were much shorter. Because of this, Wilmes and Vogt had to navigate how to support each other in new ways, such as making sure they are staying healthy and conditioned for the longer, more physically demanding year.

The ability for Wilmes and Vogt to adapt and conquer together is one huge reason why they both play such a huge role on the team so early on in their careers. Despite their great individual attributes that make them great players, what truly makes them special to the team is how their relationship off the field uplifts and complements each other’s abilities when on the pitch.

This is why both were named to the All-Freshman team in the spring, an honor that meant a ton to the both of them., “That award served as validation for the work we put in last year and winning it as teammates was an amazing feeling,” Vogt said.

Every game the two are becoming more confident and playing even better together, which is one reason why they played so well this year.

“As long as they continue working as one, the sky’s the limit for not only them, but the team as a whole”. In the end, only time will tell what is in store for these two hard working and dedicated players and what they will do as one,” Sheehan said.