A go-ahead shot with 0.3 seconds remaining sealed the loss for NKU 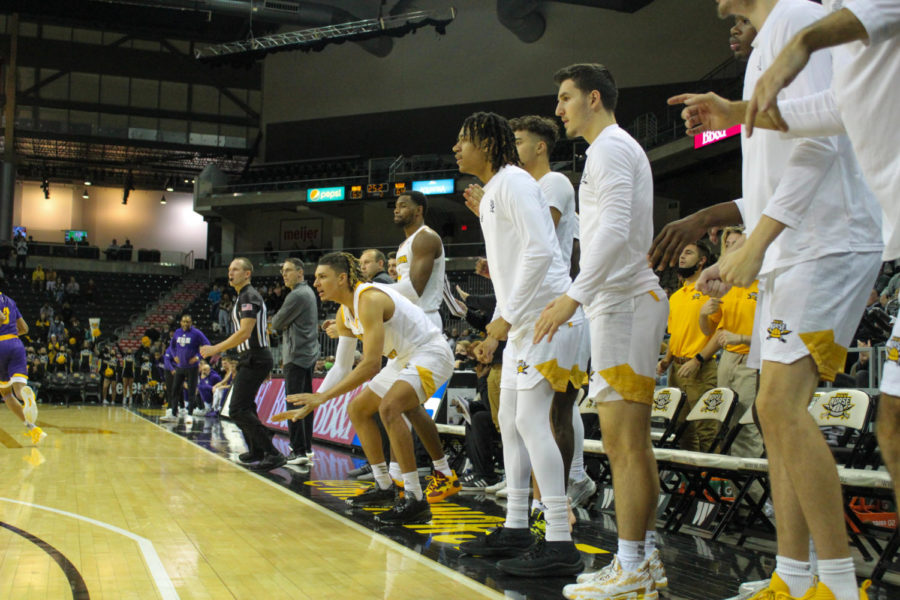 NKU came out firing behind five points from Hubertas Pivorius. The freshman sharpshooter earned his first career start, coming off an eight-point performance against Eastern Michigan in which he drained a go-ahead three in the final minute.

A second triple from Trevon Faulkner caused the Leathernecks to call their first timeout less than two minutes into the game.

“We came out and got off to a great start. I thought we were super aggressive defensively, which was great to see.” head coach Darrin Horn said.

Adrian Nelson played a role on both ends during the first half, blocking a Trenton Massner layup before finishing off a lob from Sam Vinson on the opposite end.

The turning point of the first half came with the Norse leading 19-9. Balanced scoring from Pivorius, David Böhm, Sam Vinson, and Adrian Nelson propelled the Norse to a 12-3 run, opening up a 19-point lead. The Leathernecks responded to close within 10 points, but the Norse used staunch defense to take a 14-point lead into the locker room.

In a balanced first half, the Norse shot 48 percent from the floor, including 5-9 from beyond the arc. NKU also outrebounded the Leathernecks 20 to 18 and recorded seven steals en route to forcing 11 total turnovers.

Pivorius led the Norse with 10 points in the first half. He looked to close the half with a buzzer-beating half-court shot, but his heave fell wide of the mark. David Böhm contributed seven points of his own and led the Norse on defense with three steals and multiple deflected passes.

“If I’m at that level all game, that can help us a lot.” Böhm said.

In a tale of two halves, Western Illinois opened the second half on a 21-6 run, getting points from leading scorers Will Carius and Luka Barisic to storm back and take a one point lead.

“It started, for us, on the defensive end. We didn’t come out as active as we were in the first half.” Pivorius said.

Ignited by a Nelson finish at the rim, the Norse responded to keep the game close.

One possession after giving the ball away, Pivorius sank a three pointer on a fast break to give the Norse a two-point lead and energize the crowd. Fellow European Böhm later made a wide open triple to put NKU ahead 63-31.

Coming off his first Horizon League Freshman of the Week honor, Vinson provided a spark on both ends of the floor, poking the ball away from a taller Barisic on defense and making baskets through contact.

“We like the ball in his hands. He’s a big, physical guard who can go make plays.” Horn said of the freshman. “He plays with confidence all the time.”

In a game where the largest lead was three points over the final 12:49, the most exciting action came in the final 30 seconds. Massner made a three-pointer to give the Leathernecks a two-point lead. Sam Vinson responded for the Norse to tie the game with six seconds left. Massner missed a contested layup, but the Norse failed to box out Jadrian Flores, who put home the game-winner with 0.3 seconds left.

“We’re really letting what happened on the last play impact us.” Horn said.

Offensively, Pivorius led the Norse with 20 points, establishing another career high in his short time at NKU. Nelson pulled down 10 rebounds, and guards Vinson and Faulkner each dished out three assists.

“I’m just trying to do my job and help the team as much as I can, defensively first, and then offense just comes naturally.” Pivorius said.

With the loss, NKU drops to 2-2, while the Leathernecks improve to 4-1. The Norse hit the road for a contest against DePaul on Friday, Nov. 26 in Chicago. The 5 p.m. game can be seen on FS2.

“We’ve got to toughen up, and we’ve got to mature a little bit. We’ve got to find a way to put two halves together.” Horn said.