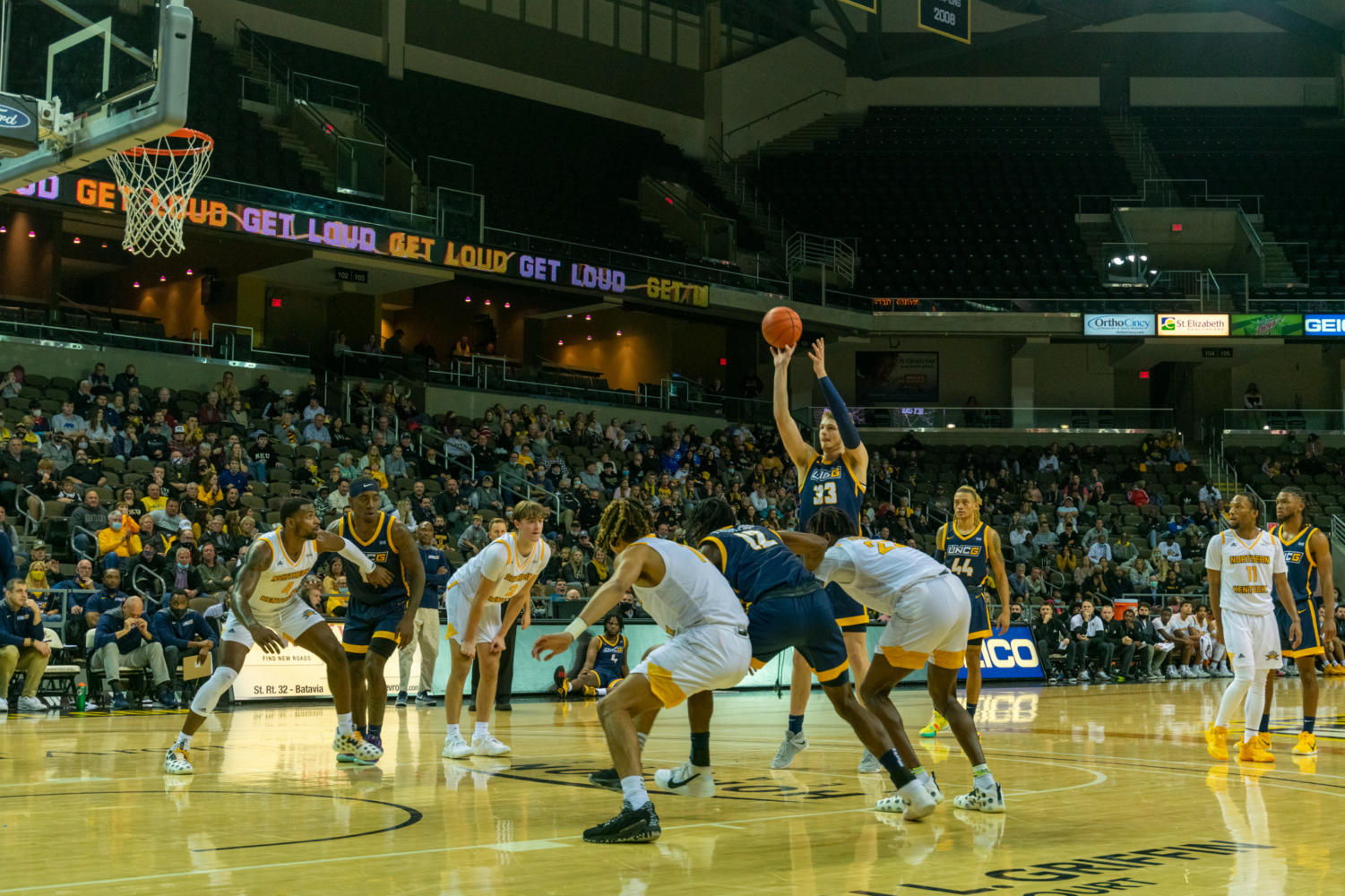 Norse falter in overtime, 70-69, in physical battle against UNC Greensboro 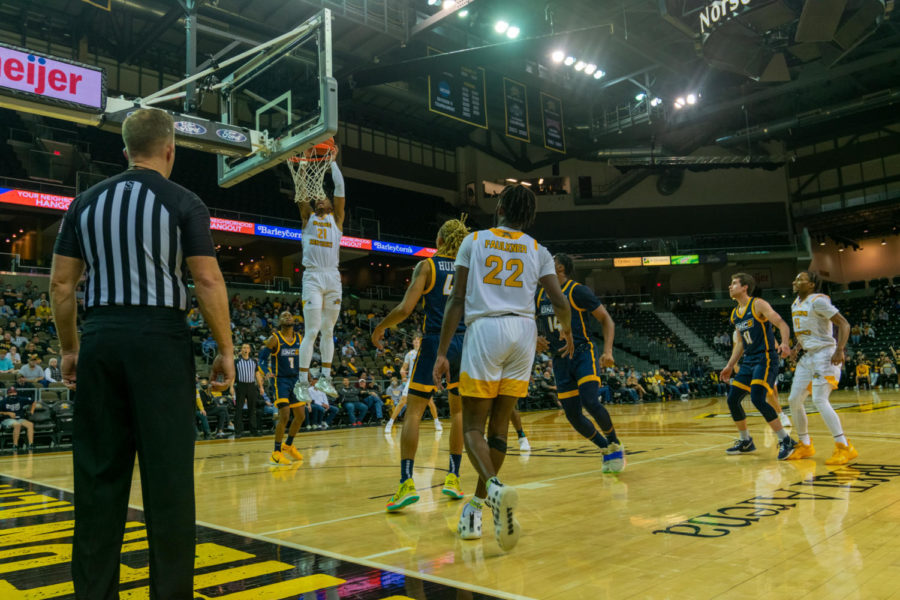 The Northern Kentucky men’s basketball team erased a 10-point halftime deficit and senior guard Trevon Faulkner picked up his 1,000th career point while tying a career-high with 28, but the Norse were unable to punctuate Friday night’s game with a victory, falling in overtime to the UNC Greensboro Spartans 70-69.

“I think these kind of games pay off for you, that’s why you play non-conference games in general is to get ready for league play,” head coach Darrin Horn said. “We knew this was going to be a really physical team, we know that’s an area of weakness for us and we’re not going to be the most physical team on the floor maybe any night, but we’ve got to play physical.”

Faulkner, who reached the 1,000-point plateau with a three-point basket at the 18:14 mark in the second half, led the Norse in scoring on Friday with 28 points, shooting 6-14 from three and 8-9 from the free-throw line. Sophomore guard Marques Warrick chipped in 14 points despite a quiet first half, and freshman point guard Sam Vinson stuffed the stat sheet with five points, five rebounds, seven assists, three steals and a pair of blocks.

“It was special,” Faulkner said about reaching 1,000 points for his career. “It wasn’t really something that I was looking for or really knew about, but it felt good.”

NKU started off the contest hot, draining their first five field goals of the night, including three from beyond the arc, taking an early 13-9 lead before the first media timeout.

But UNC Greensboro, a team that reached the NCAA Tournament last season and has now won 126 games since the start of the 2016-17 season, did not back down after NKU’s blistering start.

After Faulkner’s third made three-point shot of the game with just under 14 minutes remaining in the first half, the Spartans went on an 18-5 run over a span of 8:36 to take a 32-23 lead at the under-4:00 media timeout. Multiple buckets by graduate guard De’Monte Buckingham stretched the lead to double-digits and the Spartans went to the locker room holding a commanding 38-28 lead.

“Pretty much we just didn’t have the energy or competitiveness in the first half, so that was a big emphasis coming into the second half, just making sure we guard like we normally can and just picking up the energy as a team,” senior forward Adrian Nelson said.

To begin the second half, the Norse did exactly that, coming out of the intermission by embarking on a 12-0 run in just under three minutes, surging ahead of UNC Greensboro 40-38. Warrick, who uncharacteristically shot just 1-7 from the field in the first half, led the early second half surge with seven points, showing, as the team saw last season, that the playmaking guard can get hot at any time in the game.

The game remained a closely contested, physical battle throughout the second half, as neither team was able to stake a large lead, and with under a minute to play, the game was evened at 60.

Needing a basket, the Norse put the ball in the hands of their star sophomore, Warrick, who took the ball at the top of the key, shot over the outstretched arm of his defender, and buried a go-ahead triple, pushing the Norse ahead 63-60 with 40 seconds remaining.

“That’s just kind of what he does,” Horn said. “He loves the moment and wants that shot, and is very capable of making it, so that was a huge play for us,” Horn said.

After a timeout, Spartans forward Mohammed Abdulsalam connected on a layup with 27 seconds left, forcing the Norse to connect on free throws down the stretch. Fouled with 19 seconds remaining, Faulkner connected on the first, but missed the second free throw, allowing UNC Greensboro a chance to tie the game and send it to overtime.

With just three seconds remaining, Adbulsalam would do just that, converting another layup to tie the game at 64. Faulkner got the opportunity to take a potential buzzer-beating shot, but the ball rimmed out, sending the Norse to overtime in just their second game of the season, and first game against another Division I opponent.

In overtime, a quick and-one basket from senior guard Bryson Langdon pushed the Norse ahead 67-64, but once again, UNC Greensboro continued to fight back, tying the game on a layup by junior guard Kobe Langley with 2:52 remaining.

Leading by one in the final minute after Nelson converted one of two free throws with 42 seconds remaining, Buckingham played the hero role for the Spartans, connecting on a putback layup with 21 seconds to go and giving UNC Greensboro a 70-69 lead that they would not relinquish. Faulkner took one final shot as time dwindled off the clock, but was unsuccessful as the Norse dropped to 1-1 on the 2021-22 season.

“I think we showed a good response in the second half,” Horn said. “I think we made some of the plays that we need to make defensively in terms of physicality, but I think there’s really more to learn from it in terms of if we’re going to be our best, and we’re going to beat good teams, especially physical teams, we have got to do it from minute one and we did not do that on the defensive end and rebounding tonight.”

In just the second home game of the season, NKU drew an electric home crowd on Friday night, as just under 2,500 fans, including a fairly large contingent of students, made their presence felt in the arena throughout the night.

“Terrific crowd, and a good student crowd again, and we feel like that’s an area that’s an advantage for us,” Horn said. “I hate not to be able to pull out a win for them, because they were terrific and gave us everything they had.”

As the Norse look ahead to their next game Thursday night against Eastern Michigan at BB&T Arena, both Faulkner and Nelson talked about how the team will have to continue to lean on one another to be able to respond to the loss on Friday night and use it to learn from.

“Being the leaders, learning from this game and picking our teammates up, making sure that we’re not down on anything and we’re just moving forward and ready to compete for the next game,” Faulkner said.