Lindsey Duvall poured in 27 points in the loss 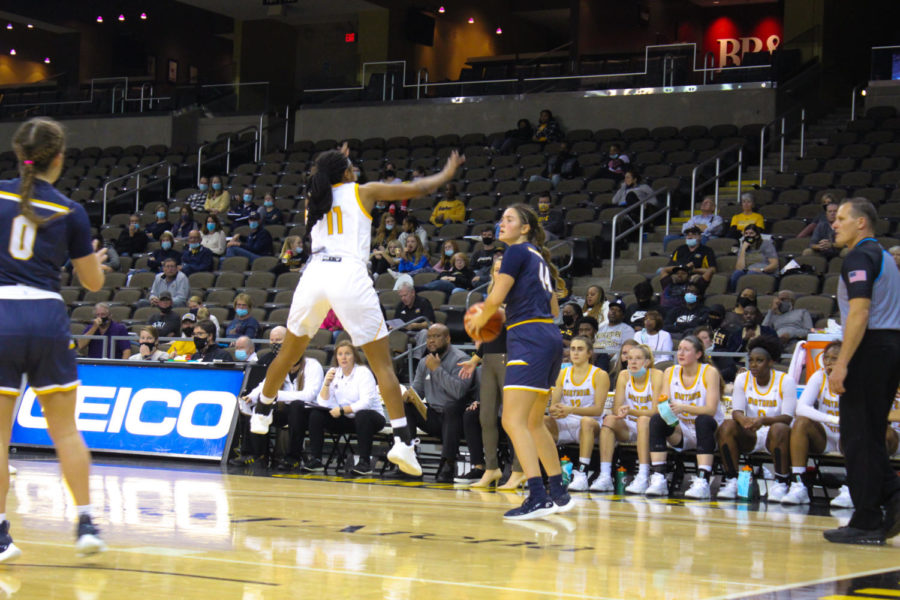 Redshirt senior guard Lindsey Duvall scored 27 points for the Northern Kentucky women’s basketball team on Wednesday night, but the Norse were unable to overcome an experienced Kent State team in the second half, as the Golden Flashes came away with an 80-73 win on Opening night.

“Credit to Kent State. They’re a really good team, they were picked fourth in their league, they return 97 percent of their scoring from last season, and they’ve got a good, solid veteran team and they know how to play together,” head coach Camryn Whitaker said. “They can really score the ball from all the spots they need to be able to score it from.”

Duvall’s 27 points led the way for the Norse on offense, while graduate forward Grayson Rose chipped in 16 points, while hitting four threes. Junior guard Ivy Turner added 13 points, as well as three assists. For Duvall, her 27 points on Wednesday extended her streak of double-digit points scored to 20 games dating back to last season.

“I want to give our kids a lot of credit, I thought they played extremely hard,” Whitaker said. “We’ve got a lot of wrinkles to iron out with our defense and offensively, I thought we played pretty well, and shot a good percentage so I was happy with that.”

The first quarter featured several runs from both teams early on. Right out of the gate, the Norse scored the first seven points, including five consecutive points from Duvall. The Golden Flashes would answer however, responding with a 12-0 run that pushed them ahead, shooting 5-7 from the field over that stretch.

While Kent State led through the end of the first quarter, the Norse ended the period on a high note, as senior Emmy Souder picked up a quick steal in the final ten seconds and Duvall ended the quarter by knocking down a buzzer-beating jumper near the free-throw line, pushing the Norse within three, 14-11.

Fueled by the momentum of Duvall’s shot, the Norse exploded out of the gate in the second quarter, scoring 18 points in the first five minutes of the quarter, taking a 29-21 lead into the media timeout. Once again though, the Golden Flashes found an answer, turning to their star forward Lindsey Thall, who scored five of Kent State’s next seven points to bring the Golden Flashes back in the game.

Late in the second quarter, the Norse would again receive another clutch shot in the final seconds of the period, as Rose drained a three off an assist from sophomore guard Kennedy Igo, giving the Norse a slight 35-33 advantage going into halftime.

The shot at the end of the half was one of four made threes in the game for Rose, who made just 14 threes in 19 games a season ago.

“It was nice to see the ball go through the net today, that’s for sure,” Rose said. “I’ll do whatever it takes for our team, wherever Coach (Whitaker) needs me.”

In the third quarter, Kent State came out of the locker room hot, led by guard Hannah Young, who scored seven of the team’s first nine points in the half to take a 42-40 lead. Kent State then turned to another one of their star forwards, Nila Blackford, who after a quiet first half, went on to score nine second-half points, including seven straight in the third quarter.

After holding the Golden Flashes to just 33 points in the first two quarters, the Norse surrendered 23 points in the third quarter alone, and entered the final quarter trailing 56-51.

NKU did not quit however, as the Norse, on the strength of their preseason All-Horizon League First Team selection Duvall, continued to climb back into the game in the fourth quarter. After the Kent State lead grew to 60-51 with eight minutes remaining in the game, Duvall buried a three and later added another bucket on a fast break opportunity, keeping the Norse within five.

After several clutch defensive plays, the Norse would take the lead with just 3:02 left, as Rose knocked down her fourth triple of the night, inducing a roar out of the BB&T Arena crowd in the first regular season game of the season for the Norse.

The lead however, would not hold. Kent State guard Casey Santoro, who led the Golden Flashes with 19 points on the night, would give them the lead with an immediate answer to Rose’s shot, finishing a driving layup. One minute later, Santoro’s dagger three gave Kent State the breathing room that they needed with just over one minute left in the contest, as they secured the game with late free throws and held on for the seven-point victory.

“I’m always proud of this group,” Whitaker said. “I’m upset that we didn’t win the game, but I’m upset for them, because I know how hard they work every day and how much time and effort they put into practice and extra workouts and extra shooting, and all that goes into it.”

Whitaker stressed that despite the disappointment in losing the first game of the season, the college basketball season is much longer than one game and that the Norse will need to continue to keep working to reach their desired destination in March.

“We can’t allow one game to dictate our attitude moving forward,” Whitaker said.

“Khamari, her defensive intensity and her ability to guard the basketball and defend pretty much one through four is something that our team was really missing last year, so it was something we needed,” Whitaker said.

Despite the loss, the Norse played with a lot of energy on Wednesday night, as both the bench and the players on the court showed a lot of emotion for the opening game of the season.

“I thought that was awesome,” Duvall said. “If we got a stop, or if we hit a big shot, you could hear them and our fans. I think that we can be something we do every day and I know for us being on the court, it’s so nice hearing your teammates cheering for you, so I think that was definitely a huge positive for today.”

The Norse will remain at home for their next contest, hosting Eastern Kentucky on Sunday afternoon. Tipoff is scheduled for 2:00 p.m. at BB&T Arena.