NKU misses out on Horizon League tournament with loss to Oakland 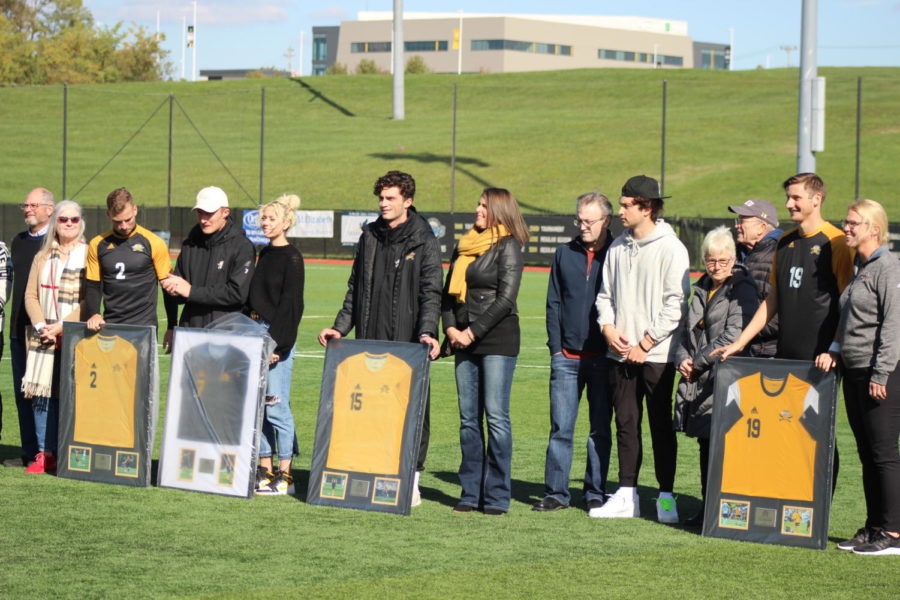 Any loss is a hard pill to swallow. But losing in double overtime on senior day is harder. The Northern Kentucky men’s soccer team finished their season Wednesday after losing to Oakland University 2-1.

With two minutes and 30 seconds into the second overtime Oakland’s Noah Jensen was able to hit a low right goal, finishing the game and ending NKU’s season.

Junior Brodie Sallows was able to score a low center goal in the second half with an assist by junior Sam Robinson.

However this celebration was cut short as Oakland’s Kieran Hayes was able to hit a low left goal just 49 seconds later, putting the game at a tie until the second overtime.

“Congratulations to Oakland on deservedly winning the regular season championship,” head coach Stu Riddle said . “We had the chances to wrap the match up but like we’ve seen over and over this season it wasn’t going to be our day.”

The loss to Oakland Wednesday also removed the chances of going to the Horizon League tournament as NKU finished eighth in the conference.

This marked the end of the soccer careers for seniors Sam Slocum, Dylan Bufton, Wes Collins and Stian Jørgensen with NKU.

‘It’s devastating to lose that way, especially on your last game,” Slocum said. “I thought that was our best effort. It just sucks that it comes short at the end of the year.”

Slocum ended his Norse career after playing with them since the 2018 season, his freshman year.

“I came in just a young little kid not really knowing anything. I turned into a man by the end of it,” Slocum said. “You know I grew up. It’s helped me so much. Catapulted me into the future for what I’ll take into my life for my kids, for my family, and my career going forward.”

This team suffered through a tough season. They finished the year as a whole with six wins and eleven losses. In their conference they went four and six. Their last game Wednesday added to a four game losing streak against Cleveland State, Milwaukee, Coastal Carolina, and now Oakland.

“This team had more adversity then any other team I’ve been on,” Slocum said. “To say we were where we were at the end of the year I mean shows a lot of character in our boys.”

The Norse ended Wednesday’s game with 22 shots and 10 shots on goal. Seven of these shots were made by forward Jesse Randall. The Norse came out of the first half with only four shots. They then responded with more than tripling this amount moving into the second half with 15. NKU was able to make three more shots in the first overtime period, but did not get one off in the second.

The Norse defense allowed 25 shots on the game, five of which were shots on goal,  with Goalkeeper Daniel Bermingham having three saves on the day.

The Norse men’s soccer team will be back for the 2022 school year.

“While it hurts right now, we will be better for this experience moving forward,” Riddle said.