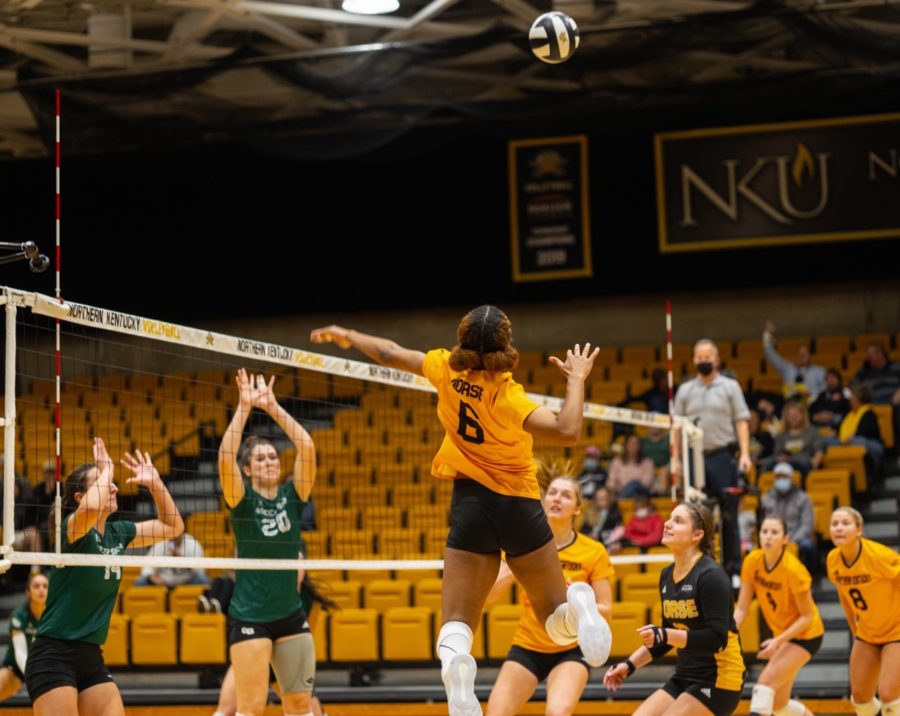 NKU’s Joy Banks (6) goes up for the kill during the Norse 3-0 win over Green Bay on Friday.

The NKU volleyball team wrapped up the home portion of their regular season schedule on Sunday afternoon, defeating the UIC Flames 3-1. Both teams entered with only two conference losses, the same as league-leading Milwaukee.  Because of a match cancellation on Oct. 3, this was also the first meeting between the Flames and the Norse.

“We knew that they were a good, strong team, very aggressive, and we just had to outwork them,” junior libero Anna Burke said.

NKU raced out to a 6-2 lead to open the match lead behind four kills from four different Norse hitters. UIC responded with a rally of their own to tie the stanza at eight. Behind fast-paced service and a daunting front line, UIC tallied 11 straight points to take a commanding 19-9 lead.

NKU eventually regained composure, but a comeback effort was not in the books as UIC took the first set 26-15.

Mikala Henderson and Martina Delucchi led the Flames with six kills each, and UIC registered a .361 hitting percentage.

UIC began the second set with a 7-3 lead, using momentum from their opening win. Not wanting to endure the same fate as the first set, NKU head coach Liz Hart used both of her timeouts by the time the score was 9-4 in favor of UIC.

“They can rally off points very quickly, UIC can. They’re the best serving team in the conference. I just get a little bit nervous if I don’t use the (timeouts) quickly on them. Then I can’t slow down their momentum, and that’s just a team that you just cannot lose momentum on,” Hart said.

The second timeout proved to be the turning point in the set. Facing their largest deficit of the set at 15-10, NKU engineered a fierce rally to tie the set at 22. With UIC holding set point at 24-23, NKU scored three straight points to take the set 26-24.

“Our block was always set up, and I could read around them, and I just read our hitters,” Burke said.

After a chippy start to the match, in which both coaches were angry at the officials and each other, it was the Norse’s turn to use momentum from the previous set, building a 10-5 lead on the back of seven UIC errors.

NKU would maintain a steady lead throughout the set, fueled by a total of 11 UIC errors. The Flames never got closer than four points, and the Norse would close out the set 25-17.

While only registering nine kills, NKU relied on six total blocks and a .304 hitting percentage to propel them to victory.

“I just felt like we got a little more comfortable with who their players were and who we should be attacking offensively,” Hart said.

Set number four was the most competitive, with neither team leading by more than three. At various points, UIC had sustained runs of four and three points, but a steady and consistent Norse side kept the set close.

In a stanza with myriad swings in momentum, the biggest punch came from NKU, using five straight points to vault into a 23-20 lead. The set and match were punctuated by a Brinkmann kill, the last of her team-leading 18. Individually, Reilly Briggs led the Norse with seven kills in the set, and six hitters tallied a kill.

The win wraps up the home portion of the regular schedule for the Norse. Even though the team only spent a month at home, Burke is thankful for the support.

“Our fans, they helped so much for us. And not being able to have all those fans there for these next few weekends, it’s going to be tough,” Burke said.

The most impressive stat from the weekend may have been 3.90 blocks per set from NKU, compared to their season average of 2.56.

Overall, a 3-0 weekend in which the Norse only dropped one set sees their record improve to 15-8, and 11-2 in conference, only a half game back of Milwaukee for first place. With only two weeks to play, it is sure to be an exciting race to the conference tournament.

“We’re just not finished yet. We need to be ready to have a target on our back and for everyone to play their best game against us,” Hart said.