Norse knock off Milwaukee and Green Bay on Thursday and Friday 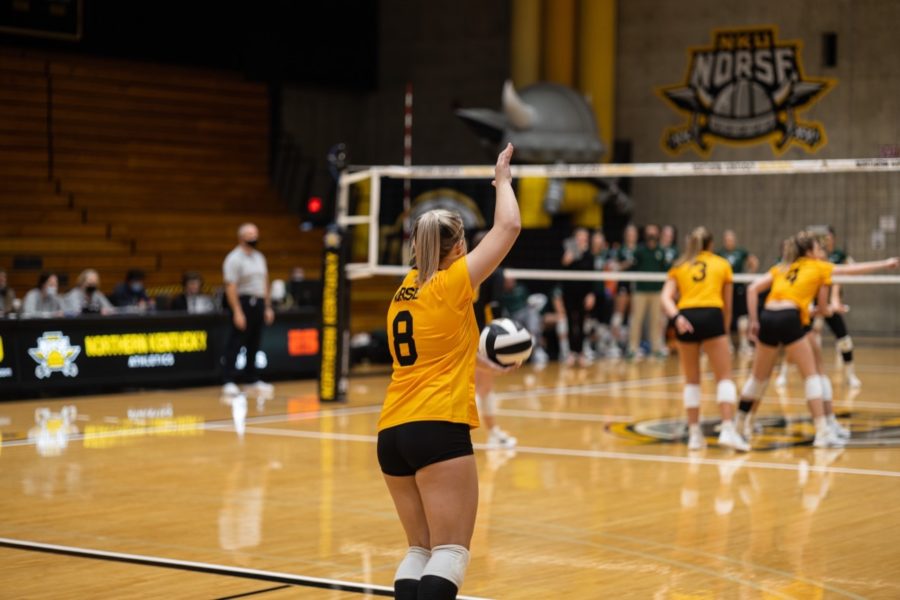 The Northern Kentucky volleyball team continued their winning ways on Thursday and Friday at Regents Hall, defeating the Milwaukee Panthers and Green Bay Phoenix respectively on Thursday and Friday to move to 10-2 in Horizon League play. The Norse have now won two in a row following last week’s loss to Wright State in five sets.

“We put in a lot of work last Sunday to prepare, and when you play good teams you’re exposed on things and it’s how fast can you respond, and I think this team did a really great job of working on what we needed to get better at and then executing it this weekend,” head coach Liz Hart said.

The Panthers came into Thursday night’s contest in first place in the Horizon League with an unblemished record of 12-0 and a 12-match winning streak to boot.

However, the Norse proved once again that they are also a force to be reckoned with in the Horizon League on Thursday, sweeping Milwaukee in three sets behind junior outside hitter Reilly Briggs and a dominant blocking effort at the net.

The Norse totaled 15.0 blocks in the match, which is tied for the 10th-most in a three-set contest this season in the nation, according to NKU Athletics. Freshman Sequoia Hunt led the team with nine total blocks, including three solo stuffs.

Briggs recorded a match-high 13 kills on a .706 attacking percentage. After Thursday’s match, Briggs ranked second on the Norse in kills and has been an instrumental part of the Norse attack during the 2021 season.

NKU made quick work of Milwaukee in the first set, dispatching the Panthers 25-16 on the strength of six blocks. Down 4-2 early in the match, the Norse broke off an 8-2 run and after allowing Milwaukee to climb back to within two, dominated the rest of the set.

The second and third sets were much closer and continued to go back-and-forth, as the Norse relied on comeback efforts to take both sets. In the second set, NKU trailed 21-20 before three consecutive points put the Norse back in the lead. After Milwaukee evened the score at 24, the Norse would rally for the next two points to take a commanding 2-0 lead.

In the third set, it was Milwaukee’s turn to go on the comeback trail, as an early 6-2 Norse lead was quickly evaporated by a Panthers rally that saw them take a 14-11 advantage.

But as was the case for much of Thursday evening’s match, the Norse did not go down quietly.

Norse get off to hot start, dispatch Green Bay in three sets

After trailing 3-0 early in the first set, the Norse, led by a pair of seniors who were honored on Senior Day, Anna Brinkmann and Natalie Hardig, rebounded to take the first set by a score of 25-14. Brinkmann picked up four kills, while Hardig recorded two kills as well as four blocks.

Green Bay struggled to generate a consistent attack in the first set against the Norse, picking up eight attack errors. On the other side, NKU came out of the gate hot, recording a .375 hitting percentage in the first set, while also picking up 16 kills to Green Bay’s eight.

In the second set, the Norse continued to play fundamentally sound, connecting on 13 kills for a .257 hitting percentage. With the score evened at two, the Norse broke off an 8-1 run to take a decisive 10-3 advantage. The Norse remained in control throughout the second set, using a combination of timely blocks and kills, led by Brinkmann who went on to lead the team in kills for the match with 11 total.

In the third set, Brinkmann picked up her 1,000th kill of her career, becoming the 20th player in Norse history to reach that milestone.

“It’s exciting,” Brinkmann said. “You can’t get a kill without a set and our setters put up great balls and we had great passes, so it’s really exciting and definitely a huge accomplishment.”

“I just love this group of seniors. They have helped raise our program’s level,” Hart said. “Their commitment, I never worry about them over the summer, they put a ton of work in and they work really hard. They’re great leaders, great teammates. I’m so proud to be their coach, because they’re awesome people and just even better players.”

The Norse went on to win the second set in another lopsided final score, winning 25-17.

In the third set, the Phoenix came out playing much more clean than the first two sets, jumping out to an early 8-5 lead. The Norse evened the match at 11 on a Green Bay attack error, and were able to stretch their lead to 14-12 on consecutive kills from Abby Kanakry and Brinkmann. Multiple attack errors from the Phoenix gave the Norse the breathing room that they needed to secure the 25-19 victory and the 3-0 sweep.

“We knew this weekend was going to be big, having three matches in four days, so we definitely tried to make it easier for ourselves only having to play three sets,” Brinkmann said. “We definitely carried over what we have been doing in practice. We prepared for these teams really well, so it’s definitely shown on the court this week.”

The Norse are now a two-match winning streak and have brought their overall record to 14-7 and 10-2 in conference action. The Norse will compete in potentially their final match at Regents Hall of the season on Sunday, hosting UIC at 2:00 p.m.