‘We have bigger goals ahead’; despite fourth consecutive loss, Norse remain optimistic 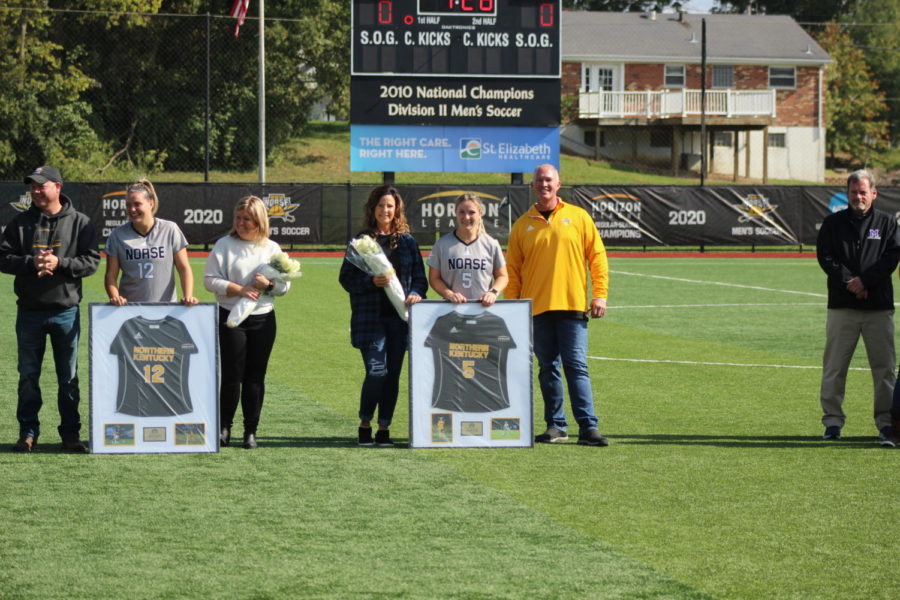 Gallery|7 Photos
Matthew Dietz
Ashleigh Cronin (5) and Morgan Jewell (12) were among the seven seniors honored on Saturday for Senior day.

Following their fourth consecutive loss on Saturday, this time at the hands of the Green Bay Phoenix, who connected on the lone goal of the match in the 87th minute, the message from the Northern Kentucky women’s soccer team remained positive: get into the Horizon League tournament, and from there anything can happen.

“I just think we really have to remain committed and remain positive, and I know this group is going to do it,” head coach Bob Sheehan said. “The goal is to get into the tournament and then anything can happen in the tournament.”

Despite the loss to Green Bay, who entered Saturday’s contest in fourth place in the conference standings, the Norse retained their third place spot in the Horizon League, and retain a high chance of keeping that third spot entering the tournament with a win on Wednesday over Wright State.

With Saturday’s defeat, the Norse have now dropped four consecutive matches, and have been shut out in each of those four contests, getting outscored 6-0 since Oct. 10. The last match in which NKU pushed across a goal was on Oct. 7, when the Norse poured in six goals against Purdue Fort Wayne.

“I think we had some opportunities to play a final pass and find an open player. I thought we really honestly created some nice passing channels and players found seams, and we just didn’t find them,” Sheehan said.

The Norse were able to muster nine shots in the match, five of which came on goal, while each team also had two corner kicks apiece.

“Soccer is a tough game, it’s a game of breaks and obviously we have not created enough breaks in the last four games, and we have got to find a way to do that,” Sheehan said. “We’re going to continue to be as positive as we can, we have a really good group, we have a hard working group and we have a resilient group.”

“They’ve been excellent. All of them have contributed massively on the field, off the field they have just been great. They’re all really high character young ladies, they’ve been very responsible, they’ve been enthusiastic, they show up for training and they’re ready to train, so it’s an absolutely fantastic group of seniors,” Sheehan said.

For Mills, who has spent four seasons with the Norse and was named to the All-Horizon League Second Team during her junior season, Senior day gave her the opportunity to reflect upon her time at NKU and the time that she has spent with the program.

“I’ve had a great four years, it’s been unlike any other,” Mills said. “This facility is amazing, I’m very blessed to play here and all of us seniors wanted to win today, and so obviously that’s not what we were wanting, but we have bigger goals ahead and the tournament is coming up so that’s what we’re looking forward to.”

In the second half, the Norse continued to see open opportunities at a goal, including a shot by Mills in the 61st minute off a corner kick and another attempt by junior midfielder Lindsey Meyer in the 67th minute that was blocked by Green Bay and richotched away from the net. In the 85th minute, sophomore midfielder Sofia Wilmes took a shot on a header near the box, but failed to connect.

Just two minutes later, disaster would strike for the Norse.

Following a free kick by Green Bay, the Phoenix drove the ball into the back line of the Norse, and off of assists from Emily Murphy and Maria Wiefering, senior forward Jordyn Cook blasted a shot into the upper right of the goal, pushing Green Bay ahead 1-0.

“I thought we did a great job all over the field covering for each other,” Mills said. “It’s not the way you want, especially Senior Day, to end, but I think overall our defense is improving and hopefully we can just turn it around come Wednesday and for the tournament.”

Before the Horizon League Tournament bracket is unveiled and the battle for an automatic bid to the NCAA Tournament commences, the Norse have one more regular season match to attempt to right the ship, traveling to Dayton, Ohio to take on the Wright State Raiders on Wednesday. Kickoff will be at 7:00 p.m.