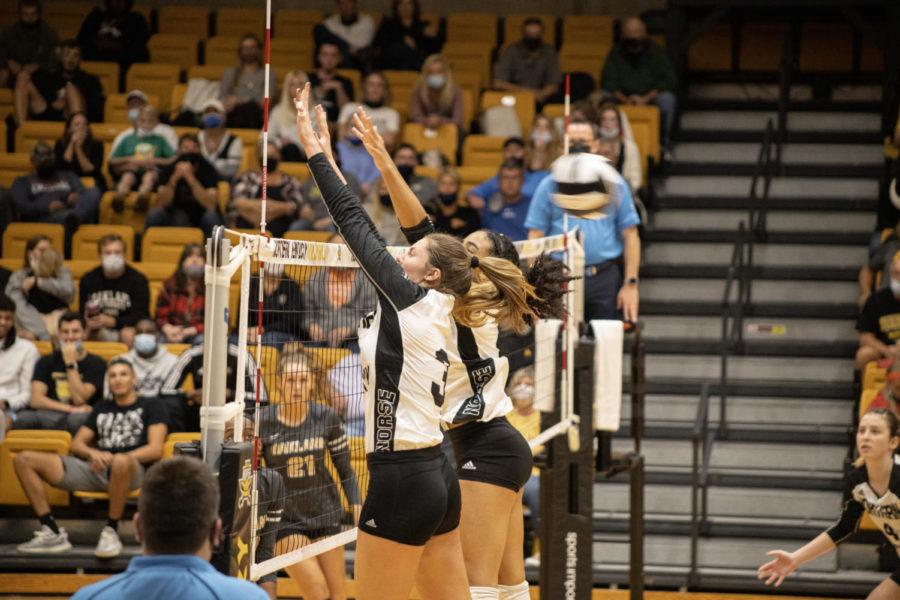 Gallery|7 Photos
Emory Davis
A pair of NKU volleyball players leap to block a shot at the net during the Norse 3-1 victory over Oakland.

In a clash of top-three teams in the Horizon League standings, Northern Kentucky defeated a tough Oakland team on Friday night inside Regents Hall. With the win, the Norse improve to 10-6 overall, and remain in second place in the conference with a 6-1 league mark. Oakland drops to 12-8 overall and 6-3 in conference.

1st set: The match began with three straight points by the Norse. After several lengthy rallies to begin the match, the Golden Grizzlies used both first set timeouts after three and four point rallies by the Norse. The first half of the set was punctuated by three blocks by a combination of NKU defenders. Throughout the set, NKU used their length at the net to tip down multiple bad sets by Oakland.

“All week, our coaches gave us a great scouting report, and being able to use that and bring it into the game and execute it is huge,” senior right side hitter Miranda Wucherer said.

Leading 23-12, NKU allowed a brief 3-1 Golden Grizzlies run, but the set ended on an Emily Wichmann serve that went into the net, resulting in a 25-15 Norse victory.

It was a total team effort on the attack, with kills split between Wucherer, Joy Banks, Anna Brinkman, Reilly Briggs, and Abby Kanakry. The Norse registered four blocks in the set while out hitting Oakland .281 to just .073.

2nd set: Joy Banks came out firing in the second set for the Norse. After a reception caromed around the rafters, Banks secured an exciting point with a kill from behind the eight-foot line. Banks had multiple unexpected kills early in the set, including a flat-footed spike that found the floor. With the match tied early at three points a piece, NKU scored six straight points, highlighted by a wild save by Banks up against the scorer’s table, who then proceeded to secure a kill for Norse.

Oakland slowly climbed back into the match on the strength of five attack errors by the Norse, and eventually climbed to within two points at 15-13. NKU refused to call timeout, weathered the storm, and secured the set 25-17 after five attacking errors by the Golden Grizzlies.

“Even when things weren’t going for us perfect, our hard work and determination definitely got us a lot of points and helped us get over the hump,” Wucherer said.

Hitting percentages were down for both teams, but NKU still outpaced Oakland .178 to .000. Banks and Brinkmann also recorded four kills apiece.

3rd set: Similar to the first two sets, NKU got out to a fast start, quickly building a 7-2 lead aided by aces from Brinkmann and Sequoia Hunt. Oakland responded with six straight points to take their first lead of the match and force an NKU timeout. The Norse fought back to tie the match at 13, but the Golden Grizzlies used a four point run to open up a 20-15 lead. Oakland finished the set on a 9-4 run overall, supported by five kills and four NKU attacking errors.

In their lone set win, it was Oakland’s turn to out hit the Norse, by a margin of .222 to .000. Brittany Welch led the Golden Grizzlies with four kills, while Madison Ross added five assists.

4th set: (25-17) Oakland used the momentum from their third set win to take an early 4-1 lead. After a quick timeout, the Norse flipped a switch, and regained the energy that carried them to their two previous set wins. With a newfound confidence, NKU went on a subsequent 12-3 run to turn the set around. Throughout the final set, NKU put together four runs of three straight points or more. Leading 22-15 and on the brink of securing a win, Hart decided to use her final timeout.

“Even though that was a seven point lead, you never have a big enough lead against Oakland. They just don’t go away. It was really more about staying aggressive and making sure that we finish it,” Hart said.

To finish off the match, NKU out hit Oakland by a margin of .237 to .049. Brinkmann and Briggs led with 6 and 5 kills, respectively. Wucherer assisted seven Norse kills and Anna Burke dug five Oakland attacks.

For the match, NKU out hit Oakland .164 to .077, including holding the Golden Grizzlies below .100 in all three Norse set wins. Briggs tabbed 14 kills, leading four Norse hitters with at least eight kills.

“That’s going to be the name of the game all year, just making sure we have balance in our offense,” Hart said.

Wucherer finished two kills shy of bagging her third triple-double of the season. She totaled 24 assists, eight kills, and a career-high 22 digs.

“Anything I can give, I try to. And if it ends up in a triple-double, that’s cool, and if it doesn’t, that’s okay too as long as the W ends up on the board.

The Norse wrap up a five game homestand on Saturday against Cleveland State. First serve is at 4 p.m and can be seen on ESPN+.