All three goals were scored in the first half 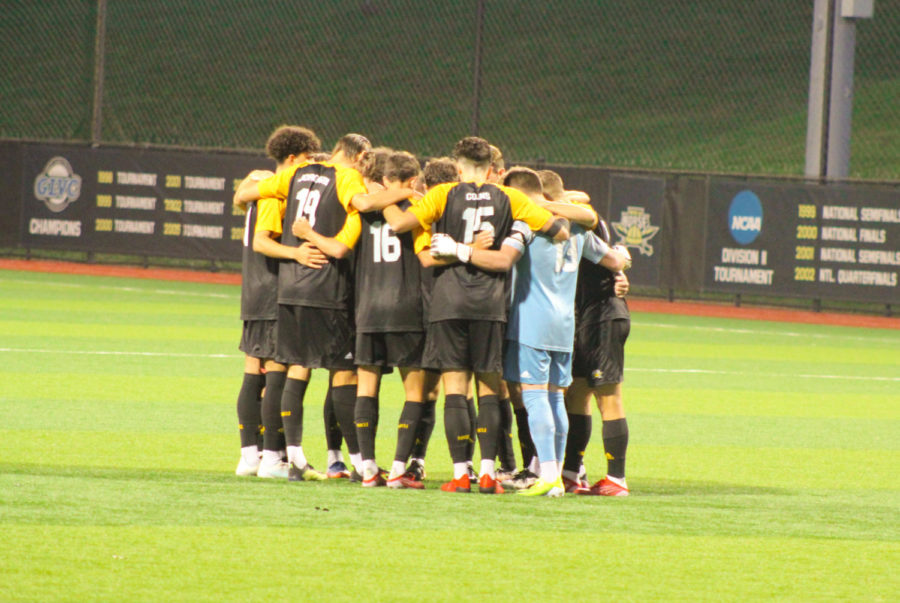 The NKU men’s soccer starters huddle just before kickoff on Wednesday against IUPUI.

The Northern Kentucky men’s soccer team is entering a crucial part of their schedule as the 2021 fall season comes down the stretch. The Norse will play at Cleveland State and Milwaukee, two of the top teams in the Horizon League, then play at Coastal Carolina, a non-conference opponent, before finishing their regular season schedule with Oakland on Nov. 3.

Before that however, the Norse had to take care of business at home against IUPUI, and did just that on Wednesday, defeating the Jaguars 3-1 to improve to 4-3 in Horizon League action.

“It’s three in a row in conference, so we’re really pleased with that, it’s put us back in a position where we want to be,” head coach Stu Riddle said. “The next three games in conference will dictate whether we can compete for the championship again, or whether we fall out of the reckoning.”

The Norse attack got started early on Wednesday, as junior forward Brodie Sallows took the seventh NKU shot of the match in the 16th minute and blasted the ball into the back of the net, registering his second goal of the 2021 season and pushing the Norse ahead 1-0.

That 1-0 advantage would last for less than two minutes, as IUPUI’s Logan Finnegan snuck through the NKU back line and fired a shot into the upper right corner of the net, evening the score at one apiece.

An equalizing goal like Finnegan’s in the 17th minute could have taken the momentum out of the Norse attack, but NKU was undeterred, capitalizing on another open scoring opportunity right away in the 18th minute. Ben Hegge, Saturday night’s hero in the win against Detroit Mercy, snuck a shot past IUPUI goalkeeper Lucas Morefield for his third goal of the season.

In the 24th minute, the Norse extended their lead even further, as Jesse Randall, NKU’s leading scorer with seven goals entering play, guided another shot past Morefield, giving the Norse a 3-1 advantage that would hold for the remainder of the match.

Randall also assisted on NKU’s two prior goals in the first half by Sallows and Hegge.

“I thought we saw tonight some elements of the team that were really professional,” Riddle said. “Three amazing goals, probably the best ones that we’ve scored all season and then we just shut it down in the second half by being defensively resilient, so I thought overall it was a magnificent performance.”

For Randall, his goal and two assists on Wednesday brought his season point total to 21, with eight goals and five assists. The redshirt freshman from New Zealand now leads the Norse in all three of those statistical categories this season.

“The team is the most important thing,” Randall said. “I think it’s nice to get goals and goal contributions but it’s mainly about the team and we want to go as far as we can.”

In addition to a strong attacking prowess on Wednesday, the back line for the Norse stepped up in a massive way, conceding just one goal to the Jaguars, despite 19 shots taken by IUPUI. Senior goalkeeper Daniel Bermingham was instrumental in holding the Jaguars to just one goal and has played very well over the past several games, allowing just one goal over his last three starts in the net.

“We’re starting to see Danny back to what we saw last year, when he was the Goalkeeper of the Year in the conference,” Riddle said. “I feel a little bit sorry for him that he conceded that goal tonight, because it wasn’t really his fault at all, but that stuff happens in the game and that was up to the strikers to take care of that at the other end for us.”

“Three on the bounce in conference, and that’s our focus now going into Cleveland,” Randall said. “They’re on top at the moment, so we’ve got to put in a performance like we did tonight.”