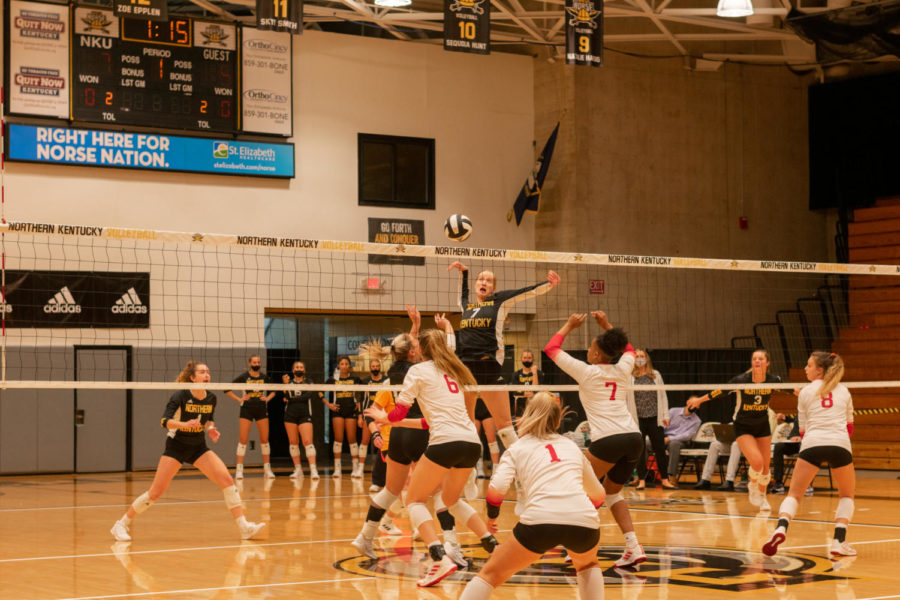 The NKU volleyball team is in the midst of a five game homestand, and has now won the first three games in that stretch. Thanks to a four set win over Robert Morris on Tuesday and back-to-back sweeps of Purdue Fort Wayne and IUPUI, the Norse are on a four game winning streak. NKU has improved to 9-6 overall and are second in the Horizon League standings with a 5-1 league record.

The Norse began the weekend with a sweep of the Mastodons, winning the first two sets by a score of 25-20 and finishing off the match by winning the third set 25-17. Miranda Wucherer registered a double-double with 21 assists and 10 kills, while also putting away six kills. Anna Brinkmann finished just shy of a double-double, contributing 13 kills and nine digs.

NKU pushes win streak to four with sweep of IUPUI

1st set: The Jaguars kept the first stanza close, but NKU steadily built a lead by feasting on several Jaguar service and attacking errors. The errors, combined with kills by six different Norse hitters, forced an IUPUI timeout with the score showing 21-13 in favor of NKU. The Norse only put together four runs of three straight points, but three of those rallies came in the second half of the match, resulting in an 11-6 run overall, allowing the Norse to take control of the set. Reilly Briggs led the Norse with five kills, including the final point to notch a 25-17 first set win. Miranda Wucherer added eight assists, and the Norse recorded three blocks.

2nd set: The second set began with a 5-1 Norse run, highlighted by three kills from Anna Brinkmann. Minutes later, a 4-0 run forced the Jaguars into a timeout with NKU leading 12-6. The break didn’t help the Jaguars, as NKU immediately went on another 4-0 run to break open the set.  With the score sitting at 19-9 in favor of the Norse, the Jaguars responded with a 5-1 run before Natalie Hardig put away the first of two straight kills after a lengthy rally. The set ended with an identical score as the first, ending on a Hardig kill and an attacking error by IUPUI. NKU hit .308 as a team, and Brinkmann led the way with seven kills.

The second set ended with several lengthy rallies, and junior Abby Kanakry knew winning those rallies was a key to victory for the Norse.

“I think that’s something we’ve really worked on a lot as a team, because in previous years, we let those long rallies go on, and then we lose them,” Kanakry said.

3rd set: Much like the first set, the third stanza was competitive early, but a 5-1 lead created some breathing room for the Norse. Similar to the first two sets, NKU used a run of four straight points to take control and force an IUPUI timeout. Two straight kills by Kanakry stretched the lead to 19-11, and the Norse finished off the set on a 10-6 run to win by a score of 25-15. Joy Banks and Brinkmann led the way in the final set with 4 kills apiece, while Katy Yopko added eight assists.

Kanakry recorded the Norse’s lone solo block during the set, and credits her coaches for working with her to improve her defense at the net.

“It was all about the coaching, too. Jason had just talked to me about, ‘You need to get your hands up. Get your hands up at the net,’” Kanakry said.

“I thought the most impressive stat for us was both of our middle [blockers] hit above .700 and .800. I thought we did a good job finding them in transition as well,” Hart said.

Kanakry also talked about the high hitting percentages while highlighting the work of her teammates .

“I think our setters did a great job of putting us in that position. I know a lot of times it’s really hard to see the block on the other side and really set us up for success, but I think they did a great job,” Kanakry said.

The Norse return to the court on Friday, Oct. 15 against Oakland. Hart also stressed the importance of having an entire week to prepare for the Golden Grizzlies.