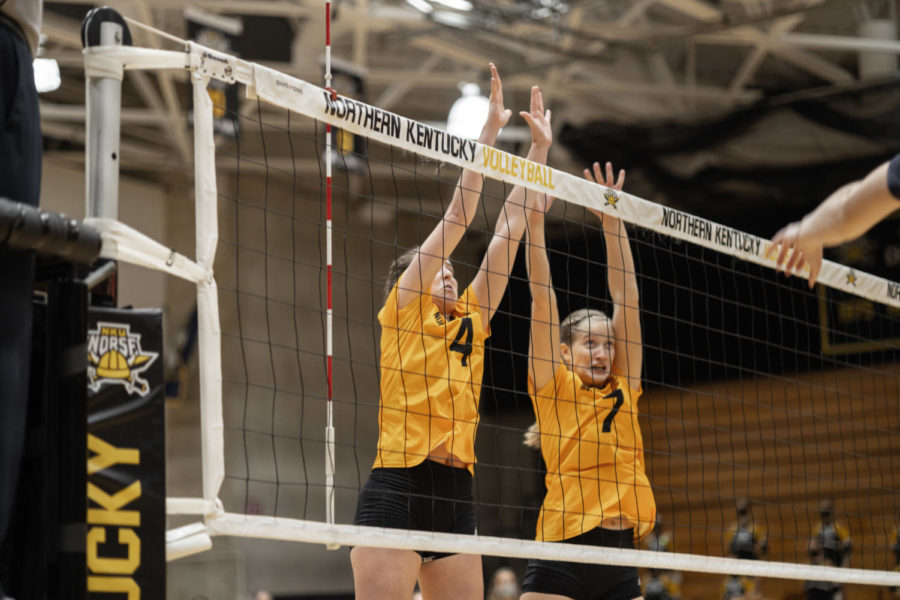 After opening the season with 12 straight road matches, the NKU volleyball team opened at Regents Hall with a win, defeating Robert Morris three sets to one on Tuesday night. The win moves NKU to 7-6 overall and 3-1 in conference play, while Robert Morris drops to 8-9 overall and 1-4 in the Horizon League. The fans in attendance were certainly happy to see the Norse in action.

“This was the first time we’ve had, in over a year, had all these people here. It was great,” junior Reilly Briggs said of the spirited crowd.

While on the road, NKU faced staunch competition in #3 Louisville and #10 Ohio State, and head coach Liz Hart said those matches prepared her team for Horizon League play.

“Our schedule up front was incredibly tough, probably the toughest schedule we’ve ever played,” Hart said. “When you play higher level teams, they play faster. So that kind of sets the tone for how fast we need to play.”

The contest began with back-and-forth rally scoring for the first five points. After taking a 3-2 lead, NKU rattled off five straight points, prompting an RMU timeout.

Coming out of the timeout, NKU stretched the lead to 11-4 before a Norse service error gave service back to RMU. The lead buoyed between five and eight points before RMU called their second timeout with the Norse leading 19-11. With the Norse leading 21-11, RMU scored seven of the next 11 points to tighten the match.

In response to the Colonials run, NKU tightened up their defense and ultimately won the set on a kill by Miranda Wucherer. Briggs and senior Anna Brinkmann led the Norse with four kills apiece, while Anna Burke recorded seven digs.

“We’re a very experienced team, so it’s really important for us to set the tone of what speed we want to play, and how aggressive we’re going to play,” Hart said.

The second set bagan with NKU racing to 5-0 lead behind two kills from Brinkmann and an ace from Wucherer. The first break in the action came when RMU called timeout while trailing 9-2 after multiple attack errors. The Norse gradually expanded their lead to 22-11 behind four more kills from Brinkmann. After RMU recorded one point coming out of a timeout, NKU put the match away on kills by Abby Kanakry, Joy Banks, and Sequoia Hunt. The second set win was keyed by five runs of three straight points or more, including scoring three straight to close out the set.

Robert Morris took an early 2-0 lead in the third set, but the Norse responded with five straight digs and ensuing kills following their own service. A kill at the net by Natalie Hartig stretched the NKU scoring run to six straight points, forcing an RMU timeout.

The timeout seemingly kick-started the Colonials, who scored five of their next seven points after the timeout to tie the set at seven points apiece. After the next 10 points were recorded via rally scoring, NKU took their first timeout of the match after two straight points by RMU gave the Colonials a 14-12 lead.

“We have an older team, and there’s just a time where they have to learn to step up and communicate and hold themselves accountable,” Hart said, referring to the timing of the Norse’s timeout.

Moments later, Hart called NKU’s second timeout of the set following multiple attacking errors and the Norse trailing 17-13. Similar to RMU’s first timeout of the set, NKU came out of their dead-ball with an increased passion. Multiple kills by Briggs and attacking errors by the Colonials forced RMU head coach Dale Starr to call a quick timeout. In the waning moments of the set, NKU trimmed the Colonial lead to 23-22, but Robert Morris closed out the set with two straight points.

Similar to the previous three sets, the Norse opened up an early 9-4 lead in the fourth set behind kills from Hunt, Hartig, and Briggs in addition to multiple errors by RMU. The Colonials closed the lead to 11-8, but NKU rattled off three straight points to force an RMU timeout with the score showing 14-8. The timeout inspired the Norse more than the Colonials, as NKU scored three more points coming out of timeout, went on a 10-1 run overall, and stretched lead to 21-9, forcing another quick RMU timeout.

“We kind of just put our foot on the gas and went hard,” Briggs said when asked how the Norse responded to dropping the third set.

Two straight errors by the Colonials allowed the Norse to close out the set by a score of 25-13 and take the best of five match. Offensively, Briggs recorded a career-high 20 kills on 32 attempts. She gives credit to her teammates for giving her the opportunity to record as many kills as she did.

“My setter was giving me really good balls, and I was getting covered a lot by my team,” Briggs said.

The Norse continue their homestand with two contests this weekend against Purdue- Fort Wayne on Friday and IUPUI on Saturday. Friday’s match starts at 6 p.m., while first serve Saturday is at 4 p.m. Both matches can be seen on ESPN+.

“Our fans were incredible tonight, and we really appreciate the support. So we’re excited to be here most of October,” Hart said.