Anna Brinkmann becoming a leader on the court for NKU volleyball 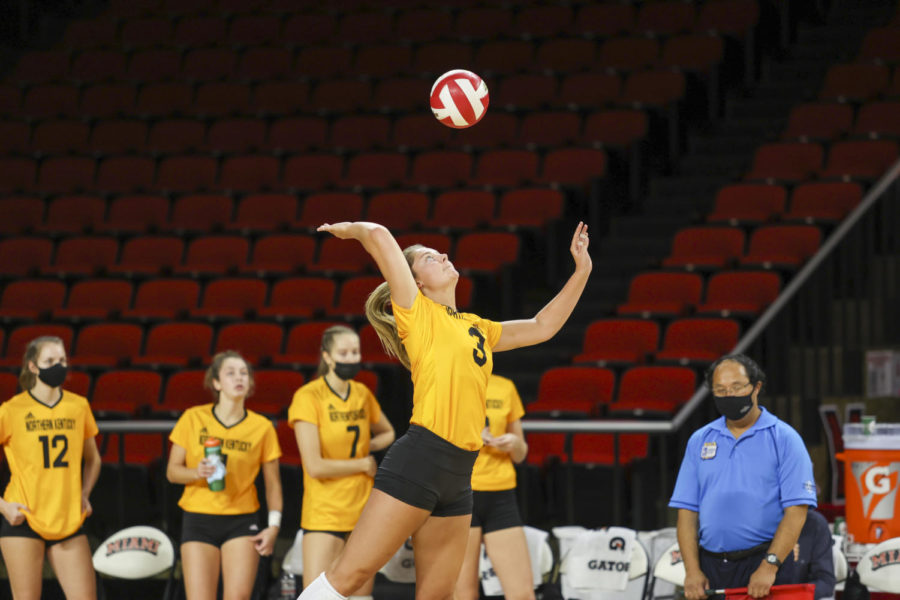 Anna Brinkmann (3) during a previous match for NKU. Brinkmann leads the Norse in kills in 2021, and is second in digs.

Senior Anna Brinkmann has had an impressive three years on the Northern Kentucky University volleyball team. As a freshman in 2018, she was named to the Horizon League All-Freshman team. In 2019 during her sophomore season, she received the AVCA All-Northeast Region honorable mention and was named to the All-Horizon League First Team.

With the volleyball team’s last season taking place in the spring, this past summer was spent conditioning and strengthening the team, since they didn’t have the offseason they are used to.

“I think it was definitely different because our spring is mainly for getting stronger and focusing on those little technical things that you can’t really work on in the fall,” Brinkmann said.

Getting stronger and growing was something that Brinkmann did very well.

“It’s funny because I just watched film with my coach from my freshman year and I’ve definitely grown not just on the court, but off the court as well. The coaches, my teammates, they’ve done a great job of shaping me into the person and player I am today,” Brinkmann said.

So far this season, Brinkmann has recorded 169 kills and 114 digs during 10 matches. She is also ranked second in kills for the Horizon League trailing behind by only eight kills. While Brinkmann has been killing it at the net, she is also communicating and talking more on the court.

NKU’s women’s volleyball head coach Liz Hart said Brinkmann has improved in every aspect of the game since her freshman year, especially in terms of communication.

“I think where she’s had to grow the most is having to be more vocal, and she does that, but she does it in a way that she’s not talking constantly, but when she does decide to talk, it’s the appropriate thing to say and it’s exactly what needs to be said at the right time,” Hart said.

Doing anything she can to be the strongest and best player she can be, not only for herself, but for her team as well is what makes Brinkmann stand out when it comes to leading.

When asked what makes Brinkmann determined to lead on court, her response was simple: her teammates.

“A lot of it comes from my teammates, volleyball is such a team sport. If you only have one player playing well in the game, you’re not going to win,” Brinkmann said. “You need to pass, you need to set, you need to hit, so I think it mainly comes from that to try to get everyone going as hard as they can.”

Junior Anna Burke also had an impressive career so far and stayed at NKU over the summer and conditioned with Brinkmann before the season began this fall. Burke said that the team came in very well conditioned.

“We didn’t have that spring season to get stronger, so I think we all really worked hard in the summer to get stronger so that we’re ready to play and practice everyday,” Burke said.

There has been a change in the dynamic on the court with the team and players. COVID-19 was a hard season on student athletes at every college campus, but the determination of the Norse volleyball team never strayed far.

“There has been a lot of improvements. We have better team chemistry this year, we work hard every day. We want to win, so we come in, we’re focused. We talk to each other, and make sure that we take our mistakes and improve on them,” Burke said.

Team chemistry was something that Hart also touched on. This team takes a lot of ownership for what they do on the court and it shows.

“I don’t feel like I’m screaming at them like I have my previous couple teams, we’re always having to be the motor for them and they’ve got the motor. So as a coach, one of the greatest things you can ask for from the team is to have that internal drive,” Hart said.

With the first home game being Oct. 5, for Brinkmann’s senior year, her goal is to win the regular season and have fun.

“They always say that winning the regular season is harder than winning the actual conference tournament. I think that’s our main goal for the season, and to have a really good senior year, not only the wins, but I want to have fun and I want to be remembered as not only a great player, but a great person,” Brinkmann said..

This story can also be found in The Northerner’s Sept. 29 newspaper. Statistics have been updated as of Saturday, Oct. 2 in this online format.