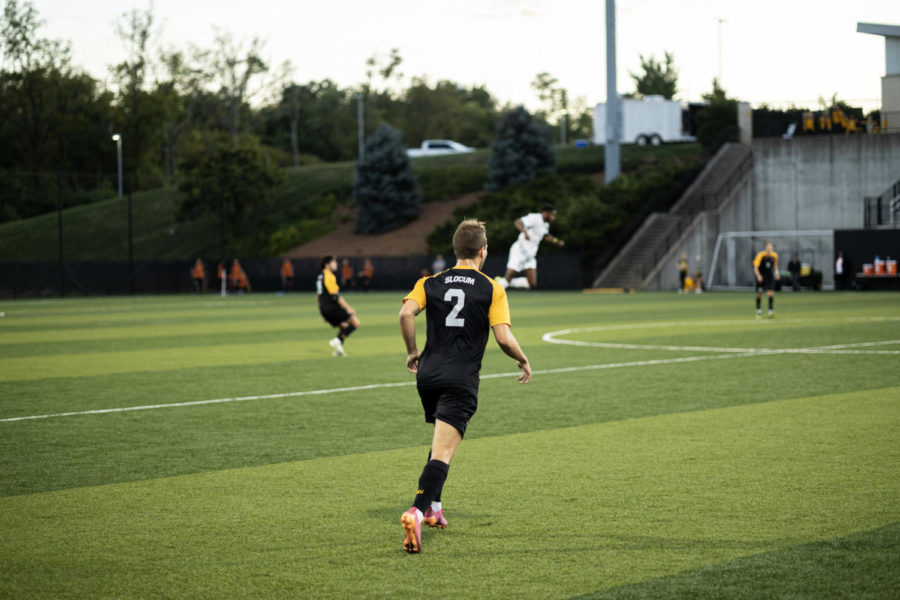 There are tough ways to lose a soccer match, and then there’s how the Northern Kentucky men’s soccer team lost on Saturday night to their Horizon League rival, the Wright State Raiders.

Tied at one with under a minute remaining in the second overtime period, Wright State fifth year midfielder Harvey Slade connected on a header off a corner kick and sent it into the back of the net, delivering the Raiders a golden goal and a victory over the Norse in dramatic fashion.

“That’s a tough pill to swallow there,” NKU goalkeeper Daniel Bermingham said following the Norse 2-1 defeat, dropping the team to 3-5 overall and 1-2 in Horizon League action.

After a scoreless first half for both sides, the Norse were able to strike first in the 51st minute, courtesy of a goal by redshirt freshman defender Daniel Kaufman. After slipping through a group of Wright State defenders, Kaufman went into a slide as he took the shot, slotting it past Raiders’ goalkeeper Sebastian Jimenez.

The goal was Kaufman’s first of the 2021 fall season, and the first of his NKU career.

“We put him in a role today that we don’t normally do, we had him specifically man-mark their best player,” head coach Stu Riddle said about Kaufman. “We didn’t expect him to have any offensive output, and so it was a nice surprise that he got his goal, but it was well deserved, he’s done a really good job, he’s a great kid, so I’m really pleased for him.”

It appeared as though that 1-0 score would hold up, and the Norse were on their way to grabbing an ultra-important three points in the Horizon League standings. However, in the 76th minute, Wright State senior forward Zion Beaton took a shot and was able to slot it past Bermingham in goal, evening the score at 1-1 and immediately changing the complexion of the match.

The match would remain even through the end of regulation, as well as through the first overtime before Slade’s late heroics just before time expired propelled the Raiders to their third victory of the season and second consecutive victory against Horizon League opponents.

“We put a lot into this tonight. We knew it was going to be a hard-fought battle, our local rivals, and you take the lead at home, you’ve got to win these games,” Riddle said. “We conceded two goals that we shouldn’t concede, and you think it’s bad enough that you’re going to come out with a point instead of three, and you end up with nothing, so it’s a real punch to the guts.”

After a first half in which the Raiders were able to outshoot the Norse by an 8-4 margin, NKU came out of halftime with a much more aggressive attack, as Kaufman was able to record NKU’s lone goal just six minutes into the second half.

For the match, the Raiders were able to record 22 total shots to NKU’s 16, while both teams each recorded nine shots on goal.

“We just dug ourselves a hole that now we have to get out of. Hopefully the momentum starts turning in our favor. It’s not like we didn’t have the chances today, we did have the chances, they just didn’t go in for us,” Bermingham said.

With just about an hour drive separating these two Horizon League rivals, the match was understandably intense throughout the night, culminating in seven total yellow cards called between the two squads, and multiple skirmishes between players on the pitch as well.

“Always want to beat Wright State, especially at home, but then again you just have to learn from it and move on for Chicago this week,” Bermingham said.

Now on a two-game losing streak after also suffering a loss against Louisville on Tuesday, the Norse will head to Chicago to battle the UIC Flames, a team that went 6-2-1 during the 2021 spring season, and is once again one of the strongest teams in the Horizon League this fall.

“It’s going to be another tough battle for us, but we’ll start preparing for them tomorrow,” Riddle said.