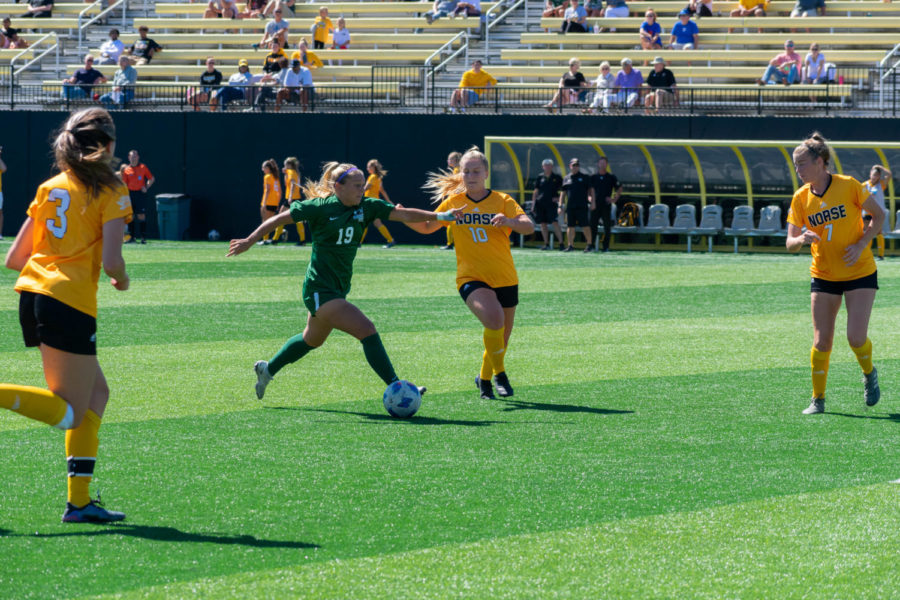 Gallery|8 Photos
Cameron Nielsen
A trio of NKU players surround a Cleveland State opponent during the Norse 1-0 win on Sunday.

As the Northern Kentucky women’s soccer team prepares to enter into the heart of their Horizon League conference schedule, they are doing so while playing their best soccer of the year, extending their winning streak to five games on Sunday afternoon with a 1-0 win over the Cleveland State Vikings at NKU Soccer Stadium.

The five-game winning streak that the Norse are on is the second in as many years for the team, as NKU won seven consecutive matches during the 2021 spring season from March 3 through April 11.

“I think working as a team, we talked to coach at the beginning about how we all have the heart to win and play, and we’re going to come back this season and do it all over again,” sophomore midfielder Sofia Wilmes said about what has fueled the current win streak that the Norse have strung together since a Sept. 9 victory over Ohio.

On Sunday, the Norse started the game off slow, as both NKU and Cleveland State were unable to record many dangerous opportunities at a goal in the first half. Of the six shots that the Norse recorded in the half, just one came on goal, a shot by Wilmes that was saved by Cleveland State goalkeeper Kyla Valaitis.

The Norse were able to come out firing in the second half however, as Wilmes received a pass from junior midfielder Lindsey Meyer in the 49th minute, and was able to maneuver around Valaitis in the box, sneaking the ball into the back of the net and pushing the Norse ahead 1-0.

“Basically it started from the back, and then it went from Kaya to Lindsey, and then I was on the end of it. We worked hard this season just to build up the play, so it was a great finish,” Wilmes said.

The Norse were able to outshoot the Vikings in the second half by a 7-3 margin, though the three shots that Cleveland State was able to record in the second half all came on goal. NKU senior goalkeeper Mimi Stines, who improved her goals against average to 0.91 after Sunday’s victory, was instrumental in holding the NKU lead, collecting several key saves down the stretch.

“Mimi’s just a great leader, she’s been an outstanding goalkeeper for us, she’s really everything we want in a captain and a goalkeeper, so Mimi’s always generally up to the challenge, and we’re obviously pleased with her performance,” Sheehan said.

Over the course of their five-game win streak, the Norse have been stellar on the defensive side of the ball, recording four shutouts in those five games, with a single goal allowed against UIC on Sep. 19 being the lone blemish.

Sheehan believes that one of the main reasons for the defensive success that the Norse have sustained in the last several weeks has been due to the team finally returning to close to full strength, as the Norse have been without key members of their roster for stretches of time throughout the fall campaign.

As the Norse, who now own a 4-0 record in conference play, continue on in their Horizon League schedule, Wilmes said the team’s goal is to continue the progression of the areas that they have worked hard to improve on since the season began in August.

“I think just to progress on what we have, and finishing in the final third over and over again,” Wilmes said on what the team can continue to improve in training throughout the upcoming week.

The Norse will be in action again on Saturday, Oct. 2, as the team travels to Moon Township, Pennsylvania to battle Robert Morris. The Norse defeated RMU in double overtime to kick off the 2021 spring season back on Feb. 10.