Lydia Self nets the game winner in Horizon League opener 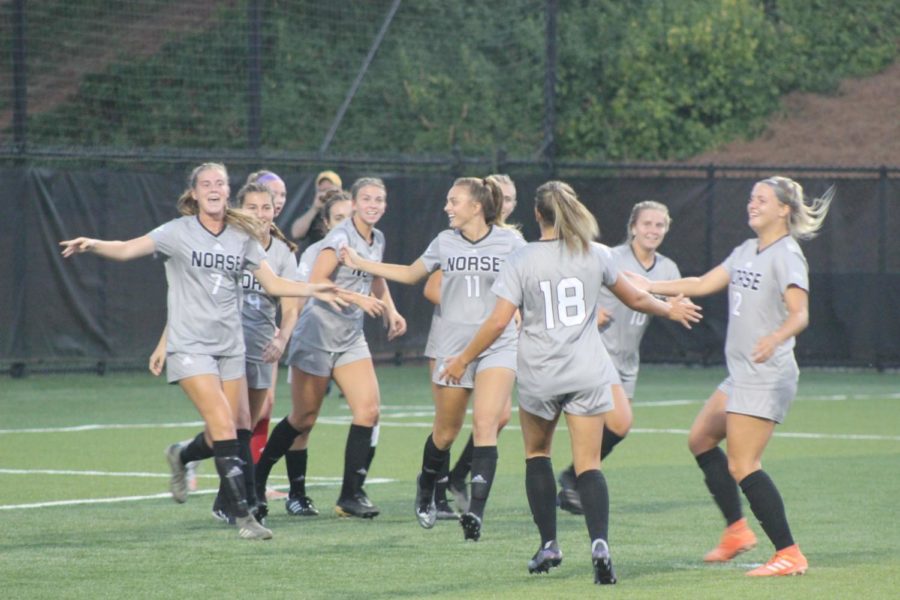 Gallery|10 Photos
Matthew Dietz
NKU players celebrate a first half goal by Lydia Self (7) during Thursday's win against Detroit Mercy.

The NKU women’s soccer team defeated the University of Detroit Mercy Titans 1-0 on Thursday night at the NKU Soccer Stadium. With the win, the Norse are now 3-3-2 overall, and 1-0 in Horizon League play. The Titans drop to 1-7 overall, including a 0-1 mark in conference.

The Norse seized possession early and controlled the ball throughout the first half. However, the Norse were often stifled by their own aggressive play. NKU launched multiple attacks on goal, but the Titan defensive line and goalkeeper Marisa Silver were able to keep the ball out of the back of the net.

“You can’t necessarily get disappointed if you rack up nine or ten corner kicks and you haven’t scored yet.” head coach Bob Sheehan said of the Norse’s tempo in the first half. “We just have to stay focused and positive, and obviously try to execute one of them.”

Throughout the first half, Detroit Mercy showed flashes of offense, but possession was quickly snuffed out by the NKU defense.

The Norse finally broke through in the 41st minute. After Macy Harper had a shot blocked out of bounds, Lydia Self connected on the ensuing in-swinging corner to put the Norse on the board. For the freshman from Noblesville, Indiana, scoring her first career goal was the result of hard work by the entire team.

“We’ve been focusing on… being more aggressive off corner kicks, and that’s a lot of where our offensive opportunity came in.” Self said.

Detroit Mercy attempted to match the goal on a quick breakaway by Danica Paesano, but she was quickly dispossessed by Morgan Jewell and the ball rolled across the end line for a Norse goal kick.

In the first half, NKU led Detroit Mercy 13-2 in shots, 4-0 in shots on goal, and 9-0 in corner kicks. The Titans only two shots came in the 28th and 39th minutes. “I was obviously pleased with how we were playing.” Sheehan said.

Coming out of halftime, the Norse continued to be aggressive. Sofia Wilmes put two shots on goal in the first two minutes of the second half. Throughout the stanza, NKU continued their barrage on goal, with shots coming from Wilmes, Kaya Vogt, and Lindsey Meyer.  The Norse came close to a second goal twice within five minutes when Annie Greene and Meyer had straight-on looks at goal, but both shots sailed over the crossbar.

The pace picked up in the last five minutes with end-to-end action. NKU had several opportunities to grab a second goal and put the game away late, while Detroit Mercy pushed for an equalizer in hopes of forcing overtime. The action amounted to nothing more than an increased heart rate and several excited reactions from the crowd.

“At the end of the day, we earned three points, which was our objective,” Sheehan said.

A 1-0 final score does not accurately reflect the head-to-head stats. NKU dominated every offensive category, taking 28 shots to Detroit Mercy’s six. The 28 shots by NKU are the most since the Norse recorded 30 against the University of Indianapolis in 2010. The Norse put 12 shots on goal, forcing UDM’s keeper into 11 saves. The Norse also shut out the Titans in corners 15-0.

“I think we just finally have everyone healthy, and that’s really important for us.” Self said.

“She continues to really grow and develop, She wants to be very, very successful. She’s very competitive, and she’s getting better and better.” Sheehan said of Wilmes.

The Norse hit the road for a contest against the University of Illinois-Chicago on Sunday, Sep. 19. The game starts at 2 p.m., and can be seen on ESPN+.